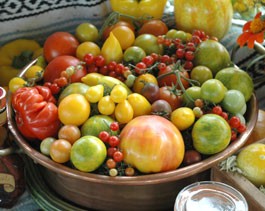 Sonoma County is at once the most obvious and most unlikely place to host the first ever National Heirloom Exposition. Most obviously? Its rich agricultural lands support perhaps the largest concentration of small-scale organic farms in the United States. The surrounding Bay Area is home to countless home gardeners who seek out heirloom seeds fit for their microclimates; virtually every small town in the sticks hosts a scion exchange where heritage farmstead fruit tree varietals are swapped.

Paradoxically, Sonoma County has also been an epicenter of the very techno-scientific currents of genetic manipulation and chemical-intensive agribusiness that the Heirloom Exposition’s organizers and participants have spent their lives criticizing and building alternatives to.

This welding of technology and commerce to horticulture has been present from the very beginning. Luther Burbank’s storied gardens and Gold Ridge Farm were in essence early labs of plant hybridization. Burbank was an advocate of intellectual property rights and proprietary control over different vegetable strains.

Burbank was just one among many plant breeders and scientific farmers turning Sonoma County into one of the largest farm baskets in California. In due time, Sonoma County’s agriculture became dominated by large monocrop operations requiring enormous chemical, energy and water inputs, all fit for export to distant markets—first with apples, then plums and eventually perfected in today’s sprawling wine and vineyard industry.

This contradiction, or tension, might help explain why the Heirloom Exposition is so appropriately held in Sonoma County. Geographically and economically, the county is still very much a battleground over the future of agriculture.

Presented by Baker Creek Seeds, purveyors of heirloom varieties, and their expansive Petaluma Seed Bank retail outlet, the Expo bills itself as a meeting place for lovers of sustainable, local and diverse agriculture. And while the public is invited to witness one of the largest collections of heirloom vegetables assembled in one place—a “world’s fair of the industry,” as it’s being called—the Expo is much more than just a showcase.

“There are lots of movements that are part of this,” explains Kathy McFarland of Baker Creek Seeds. “We’ve got the Slow Food movement, the local foods movement and many more. I think we’re part of a shift, as more and more people become educated about and frustrated by our food system, and as people become aware that our food source needs help.”

The dominant food system McFarland refers to relies on hybrid and GMO crops grown on large farms that are operated by corporations and tended by low-wage immigrant and migrant workers. Heirlooms are simply unhybridized vegetables that breed true and haven’t been manipulated with genetic engineering; thus, heirloom farmers can save seeds to remain independent from Monsanto and other biotech companies.

According to McFarland, the Heirloom Expo has already signed up hundreds of exhibitors, small farmers and backyard gardeners planning to show off their trophy vegetables. About 200 vendors will sell everything from compost tea to garden tools, and in addition to produce, there will be heritage breeds of livestock grazing about.

The most exciting aspect of the three-day expo is the lineup of guest speakers, packed with 70 farmers, herbalists, cooks and other doers and thinkers of the movement, including Chez Panisse’s Alice Waters and Sunset Magazine editor-in-chief Katie Tamony. Topping the bill is eco-feminist author, physicist and world-renowned leader of the movement for food sovereignty Vandana Shiva.

In a nod to Sonoma County’s status as a strategic battleground over the future of agriculture, more than a few panels at the Expo will address genetically modified organisms. In 2005, Measure M, which would have banned GMO crops within Sonoma County, was defeated at the polls 42 to 58 percent. The Farm Bureau and wine industry spent upwards of a million dollars against it.

The Expo will include at least four presentations about the economic, environmental and health problems inherent in genetic engineering, problems Dr. Shiva summarizes as a form of “bio-piracy.” The 2012 state ballot initiative to require labeling for all GMO food products will be explained in one session, and there will be a talk on “the politics of GMOs” by congressional candidate Norman Solomon.

“Given the fact that Mendocino to the north and Marin to the south are GMO-free,” explains Paul Wallace of the Petaluma Seed Bank, “we thought it would be a good idea to have an event that would promote pure food, showcasing the diversity that was once available.”