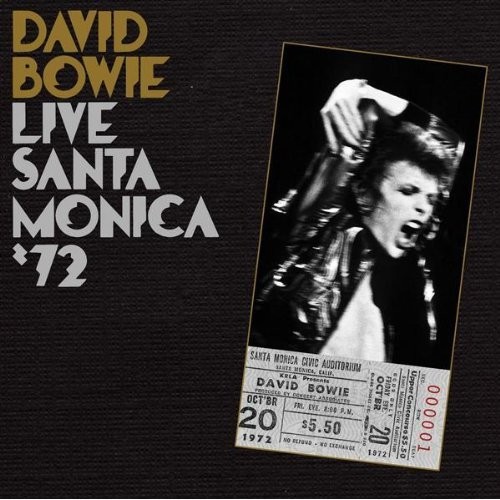 Since we’re in the middle of the longest hiatus David Bowie has ever had, it’s a perfect time for the release of Live Santa Monica ‘72. This excellent live document is from his first-ever American tour, promoting his glam-rock classic The Rise and Fall of Ziggy Stardust and the Spiders From Mars. Although Bowie’s flamboyant, kabuki alien image at the time helped transform him into an international icon, the music and the performances by this classic band lineup stand on their own.

Guitarist Mick Ronson is on fire throughout, anchoring the entire set with his relentless crunchy assault, especially forceful in a 10-minute “Width of a Circle.” Also fascinating is the relatively sparse rendition of “Space Oddity,” where Bowie hums and intones throughout in place of the familiar orchestral swells. Clumsy and gutsy at the same time.

What’s especially cool is how this long-popular bootleg retained its junkyard tarnish, complete with sound glitches, a sophomoric album cover, and DJ comments from the original KMET broadcast. In fact, they most likely just slapped the broadcast onto a CD and called it a day. While seemingly as despicable as blatant repackaging of the same albums every few years, EMI’s found a strange little niche that may extend their physical CD-selling days a little further.

While another live release from Bowie’s last tour as mere mortal may seem redundant, Live Santa Monica ’72 is a vast improvement over the Ziggy Stardust film soundtrack. Not only does the group sound hungrier and more energetic here, but we also get a different Velvet Underground cover (“I’m Waiting For the Man”) and rarely heard Hunky Dory classics “Queen Bitch” and “Andy Warhol,” each performed with the same youthfully nasal grit Bowie exhibited on his recorded albums. An early “Jean Genie” makes you wish for a later tour’s performance (especially the brilliant shock that was the Young Americans period), so let’s hope for similar releases, just like Bob Dylan’s Bootleg Series.

Sonic Youth – Hits Are For SquaresSonic Youth caught a lot of shit last year about their impending partnership with Starbucks. At their triumphant Berkeley show last year, in which they performed their masterwork Daydream Nation in its entirety, the subject even crept into the heckles. Bassist/vocalist Kim Gordon responded by reminding how much more evil their “normal” record company corporation was. Good point. And Starbucks Entertainment is actually a part of Universal Music Group, so…

No matter what your take on the subject, Hits Are For Squares is strangely enough the best Sonic Youth “best of” out there. It’s the only one besides Screaming Fields of Sonic Love, actually, but that one only went up through 1988, stopping just short of the DGC output that was actually above the radar for a while. Although only 16 tracks long, the set is a wonderful combination of known radio songs, gems from the 80s, and random album tracks long forgotten. Sonic Youth has released dozens and dozens of albums, I know. But in lieu of actual charting hits, their near-conventional, more structured tunes represented here are surely the most appealing to the casual, curious listener.

Although the idea sounded lame as hell at first, the great track listing is owed to the fans (famous ones) who picked the songs. A lot of them are obvious, like Mike D’s “100%”, Radiohead’s “Kool Thing”, and their cover of “Superstar” chosen by (who else?) Juno screenwriter Diablo Cody. But there are some charming surprises in the liner notes, like director Allison Anders poignant story about driving with her daughter while appreciating 2004’s “Stones” in silence. Best of all is Mike Watt’s annoyance that someone had already picked “Tuff Gnarl” off 1987’s Sister, a song he’s covered. “I wish I would’ve been asked earlier – does this mean I throw chingasos with [Dave] Eggers over first dibs?”

While it doesn’t include anything from their excellent Rather Ripped, Hits does feature a brand-new John Agnello-produced track. Recorded last winter, “Slow Revolution” is just as it sounds: a dreamy, down-tempo chime-guitar affair, where Kim Gordon’s muffled vocals (with only the title of the song ascertainable) have an ethereal Sigur Ros-like quality. (I can’t wait for their next album.)

No SY retrospective would be complete, of course, without a certain classic selected by Eddie Vedder. “I’m from Seattle, but fuck coffee,” he says in perfect irony. “Nothing gets you going like putting on ‘Teenage Riot’ at full volume…0 to 60, standing still.”—David Sason