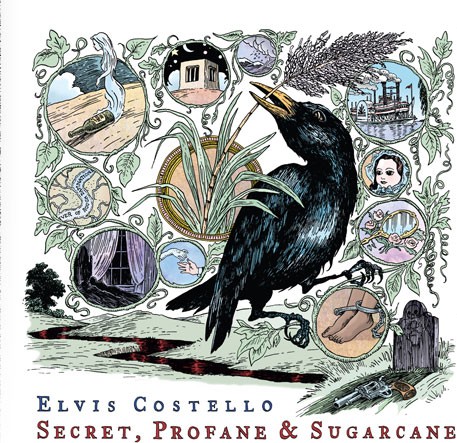 This week’s Secret, Profane and Sugarcane is the album that Elvis Costello was meant to make. The set is the culmination of all his roots/country-western excursions, from 1981’s covers record Almost Blue to 2004’s southern-fried collection The Delivery Man.

Going much further than 1986’s Americana tribute King of America, Costello ditches the entire rock band setup, in favor of dobro, accordion, double bass and the fiddle. Now regulars at Hardly Strictly Bluegrass, Costello & his acoustic seem right at home in the down-home arrangements. Stuart Duncan’s transcendent, weeping fiddle buoys each song, especially  “I Felt the Chill”, co-written by Loretta Lynn, and the somber “She Handed Me a Mirror”, one of four songs from Costello’s oft-delayed chamber opera about Hans Christian Andersen.

Costello’s wizened, gravelly voice makes with the group a perfect union, one he obviously didn’t want to waste, judging from the inclusion of old songs “Complicated Shadows” (a vast improvement over the original) and “Hidden Shame”, originally written for Johnny Cash.

While comprised mostly of torch songs, Costello sounds like he’s having the most fun of his career on the record. Case in point is the playful, jug-band blues of “Sulphur to Sugarcane”, which gained a new couplet each night on the Bob Dylan tour Costello opened for last year: “The women in Poughkeepsie, take their clothes off when they’re tipsy.”

Although from different sources, the songs make a uniform, satisfying set. Because of the expert “non-rock” musicianship and luscious vocal melodies (hear instant classic “The Crooked Line”), Costello’s sometimes capricious muse gains newfound credibility, and we finally can understand the constraints of his traditional band (the Attractions/Imposters). Maybe it took him 30 years to get here, but the songwriter’s roots tunes finally sound authentic instead of gimmicky. Secret, Profane and Sugarcane is a must-hear and confirmation that 21st-century Elvis Costello is best in a cowboy hat.– David Sason