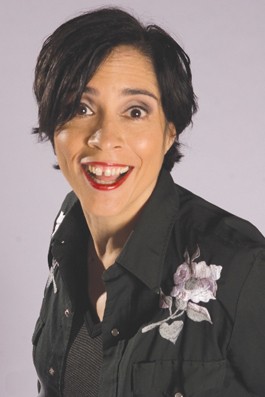 Voluble comic has no problem being the voice of 'Latino dorks'

Interviewed in these pages 10 years ago, comic Marga Gomez described her dating scene succinctly. “The lesbians I’ve known are not good at dating,” she complained. “We’re good at relationships, so all our dates are like relationships—even a first date. We go to dinner, discuss our innermost secrets and the secrets of our ex-lovers; then we’d have dessert, pay the check and maybe I’d have the guts to pop the question ‘Do you want to come back to my place and weep?’ Then there would be couple’s counseling and division of property by the second date.”

Fast forward a decade, and Gomez is now partnered up, joking that her girlfriend is a smoker, which makes it so much easier to get along with her. “When you’re with a fuck-up,” she joshes, “they’ll give you anything.”

Gomez stars with Ugly Betty‘s Alec Mapa at the 15th annual Gay Pride Comedy Night, an evening of standup followed by an old-fashioned dance party that has gained in popularity every year. There is no star or co-star, as each comic is delighted to be co-headlining. Things are so gosh-darn friendly and giddy that event organizer Ellen Silver even wants straight folks to attend, and given the level of the performers and the $15 ticket, they may just take the plunge.

Count on Gomez to offer some light-hearted conciliation to the recent Proposition 8 decision by the California Supreme Court. “We don’t want our children to know about gays marrying,” she joked during a show before last year’s election. “It’s better that they just know about gays dating—and cruising.”

Asked recently if her career has changed as Latinos become a more visible and vigorous political and cultural force, she says, “I like to call myself the butch Ricky Martin. Yes, there’s more visibility and clout, but there is also more backlash. Hello, Lou Dobbs, swine flu? I don’t get as much bounce from the ‘Latin explosion,’ because I am a Latina who can’t speak Spanish or dance salsa; I can only eat salsa. I’m part of the silent minority in the Spanish majority. Latinas like me get attitude from other Latinos because of our gringo accents. I’m writing a show about this issue, a comedy that I’m opening Off-Broadway later in June. I want to be the voice for Latino dorks.”

After the Santa Rosa gig, Gomez flies back east for a series of gay pride blow-outs before heading to Scotland for the Edinburgh Fringe Festival and then stints in Mexico. She exults, “This will be a great pride month for me. It’s my birthday, my TV special airs, I play Boston Pride, play a week in N.Y.C. off-Broadway, and get to work with Alec Mapa. I’m hoping Alec can hook me up with Salma Hayek. My girlfriend will give me a get-out-of-jail-free pass for that.”