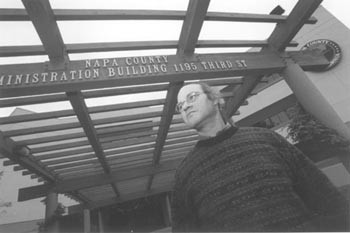 Man with the plan: Napa County planner Jeff Redding says that a landmark erosion ordinance implemented in 1991 has led to a marked increase in environmental protection. The Sierra Club has filed a suit claiming it doesn’t go far enough.

Napa environmental lawsuit is having a chilling effect on local lawmakers

After eight years of administering Napa’s vineyard conservation regulations, planning director Jeff Redding was floored, and not a little frustrated, when the Sierra Club filed suit in September, naming the county, and him personally, for allegedly failing to provide the necessary environmental reviews for vineyard development, and thereby endangering wildlife habitat and water quality.

The lawsuit, which reflects the concerns of those North Coast residents and environmentalists struggling to ease the impacts of burgeoning vineyard development, will “severely affect” Napa’s program, and could have a chilling effect on similar regulations throughout the state, including Sonoma County, Redding warns.

“In conversation with my colleagues in counties that are bigger in agriculture–Santa Barbara County, San Luis Obispo County–these folks are scared to death that unless they do something that’s absolutely non-discretionary or have enormous amounts of resources . . . they’re not even going to propose any rules at all,” Redding says. “I think that that is a severe problem.”

Redding is convinced that the regulations have been crucial to conservation efforts in Napa, subjecting more than 7,000 acres of previously unregulated vineyard acreage to scrutiny, and reducing potential erosion from 14 tons per acre annually to a more manageable 2.5 tons per acre.

The Sonoma County supervisors approved the vineyard planting and replanting ordinance in May, after almost two years of negotiations between growers and environmentalists. Initially, the law was scheduled to go into effect Oct. 1, but the board has yet to agree on several critical components, and, curiously, the issue dropped from view soon after the Napa suit was filed.

“I would be surprised if the ordinance gets done, frankly, unless Sonoma County has a lot of resources, or [the Board of Supervisors] makes it so non-regulating that it truly is ministerial,” Redding says. “And I’m not sure that’s what the Sierra Club intended.”

Revisions covering the guts of Sonoma County’s the law–erosion control standards and slope determination–now are scheduled to go before the board on Dec. 14, and if the changes are approved, county officials say they are optimistic that the county will have a final ordinance sometime in January.

“The lawsuit got people’s attention, that’s for sure,” Sonoma County Deputy County Counsel David Hurst says. “It’s instructive to us in how to draft our ordinance.”

The board’s instructions to staff, interestingly, have not been to tweak the ordinance so that it comes up to the Sierra Club’s environmental standards. Instead, the goal seems to be to create a document that repels lawsuits.

While both ordinances seek to reduce damage caused by soil runoff, there are crucial differences between the two. For instance, the Napa ordinance regulates all development, while the Sonoma County version–hammered out by local conservationists and grape growers–targets only vineyards. Also, Sonoma County’s ordinance will be regulated by the county agricultural commissioner, which will require growers to obtain and pay for permits for all planting and replanting of grapevines. In Napa, the Resource Conservation Department works with vineyard owners to develop an erosion-reduction plan, sending growers to the county Planning Department for a permit only if the vineyard site has a slope of more than 30 percent.

Such projects must undergo review based on the tougher California Environmental Quality Act.

THE CEQA REVIEW standard is where things get sticky for Napa. The Sierra Club argues that all projects should undergo CEQA review because the county inappropriately uses discretion to determine the appropriate erosion-control plan for projects under 30 percent slope. “The county hasn’t been actively involved in pursuing the environmental quality of the projects,” says Tom Davis, a member of the Napa Sierra Club’s executive committee. “It’s basically rubber-stamped.”

“One of the Pahlmeyer vineyards, somebody called [the owner] the poster boy for erosion,” Davis says. “These projects should be stopped.”

“The level of discretion in our ordinance, we put there on purpose,” Redding counters. “The ability to use discretion–what I call common sense–is what made passage of the ordinance possible. Farming isn’t done by rote. . . . If you come to land that is too rocky or too steep, you want people to change the project.

“There are a number of counties and local governments at crossroads,” Redding continues. “When they see an ordinance like the county’s–which has been successful in reducing soil erosion–get attacked by an environmental group, then what is the incentive?”

Indeed, in Sonoma County, the incentive for the Board of Supervisors seems to be avoidance of Napa’s situation. Sonoma County officials steadfastly maintain that agriculture is not subject to CEQA review. According to Deputy County Counsel Hurst, the board wants as finely tuned an ordinance as possible that maintains the status quo of leaving the CEQA out of the process while creating standards that foreclose the possibility of the Agricultural Commission using discretion–and potentially getting hammered.

Even if the Sierra Club doesn’t sue, it looks as though the vineyard ordinance may put Sonoma County in the hot seat anyway.

“It really shouldn’t matter whether I’m growing grapes, or growing a building, or growing a refinery or a gravel pit. If there’s no equal protection under the law, I think Sonoma County is leaving itself wide open to litigation.”

In fact, Williams said, he is considering putting together an ad hoc committee that would “try to sink teeth into” just that issue through legal action.

“If you don’t want to be proactive and responsive to this need to protect public health, safety, and environmental quality,” he told Smith, “we will file a suit essentially alleging that there is a breach of trust or lack of responsiveness to establish those basic standards of protection.”

Next ArticleGreat CDs of the ’90s