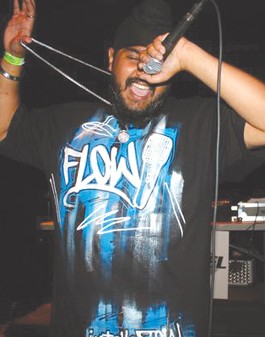 Every generation has its own denigrated music, but no genre has been a hated sound for nearly as long as hip-hop. The youth cling to it like a lifeline, while the adults of the past 20 years have treated hip-hop like a cancer, reacting ignorantly to media hype and conservative fear. Only gradually does education reach them—and if that education were to begin with Many Thoughts, One Myc, the maiden release from San Rafael’s youth center the MYC, then we’d all be in pretty good shape.

At a MYC open house last month, a group of teenagers from Oakland’s School of the Arts joined members of the MYC for an all-out freestyle of T.I.’s massive hit “Swagga Like Us.” A live band of drums, keys and bass backed up a group of female singers, while MYC events coordinator Torman Jahi got the crowd on its feet and gave the spotlight to a 20-year-old rapper in a knit cap named intellaFLOW.

With the pressures of the freestyle upon him, intellaFLOW rapped the alphabet. Even crazier, he made it sound dope. He got up to “L-M-N-O-P,” broke off into a spiraling verse, passed the mic to the left and threw his hands up. To the casual audience member, it was a sweet moment, but the hurdles intellaFLOW has overcome in his love for hip-hop made it nothing short of a victory.

Growing up in San Mateo, intellaFLOW used to leave the light on in his room, telling his parents he was scared of the dark. In actuality, he’d stay up reading books he’d sneaked into his pillowcase. One day, coming home, he found a CD on the ground in the parking lot of his building, out of its case. It was 2Pac’s 2Pacalypse Now. “I went upstairs in my room and played it,” he says, “and I was like, this is a sick way to express yourself!”

His life changed right then and there. Years later, with his eye on attending an Emeryville recording school to become a hip-hop producer, intellaFLOW found his parents unsupportive. His sister had gone into dentistry, and they wanted him to succeed as well as a doctor or lawyer. But hip-hop had given him everything, and he wasn’t about to abandon it. That’s when he got a speeding ticket.

Unable to pay the fine, he opted for community service and found the DigiQuest Learning Center, which evolved into the MYC. There, at last, were all the resources he was about to pay thousands of dollars to use at a “real” school—and they were free. He’d been making beats since he was 14 and writing rhymes since he was 12, and at the MYC, he was able to master ProTools and record on top-quality gear.

“Hip Hop: The Reprise,” from Many Thoughts, One Myc, is intellaFLOW’s story. “His parents never let him learn to use his power / He tried talking for hours and hours,” he raps, adding that “Hip-hop is my soul and these beats are my body.” The conclusion? He packs up his notebook, pen and mic, and discovers a place that’ll nurture his talents.

As the MYC’s outreach coordinator, intellaFLOW found other kids who could benefit from free access to hip-hop. “Everyone that I see walk out of here, after you come here for a while, you will learn something,” he says. He talks about kids who have gone on to produce for Bay Area hip-hop artists, who have been in and out of juvie and made something of themselves. Some reject the adult-approved atmosphere of the MYC, and go back to the streets. Often, they come back.

IntellaFLOW no longer works officially at the MYC, but that doesn’t stop him from still showing up every day. “Honestly, I don’t stop trying,” he insists. “There’s this one kid, he’s been coming here as long as I have. He’s 16, he’s been kicked out numerous times. He calls me, and he’s like, ‘You’re kinda like the father figure in my life.’ And I’m like, ‘All right, well, then you need to stop being stupid!’ He’s been good about it, he’s been doing well. I’m proud of him.”

These days, the MYC is part of intellaFLOW’s blood, and gave him a push when he needed it most. Based on his experience there, he’s headed to S.F. State with a scholarship in studio engineering, and he aspires one day to open his own recording studio. Here’s hoping his parents will be proud.

The MYC is well-represented at the ‘Unity in our Community’ festival, with performances from Bay S.L.A.M., Torman Jahi, Stay True Crew and a poetry slam by teenagers from the MYC on Saturday, May 2, at Canal Alliance, 91 Larkspur St., San Rafael. 1-7pm. Free. 415.306.0432.