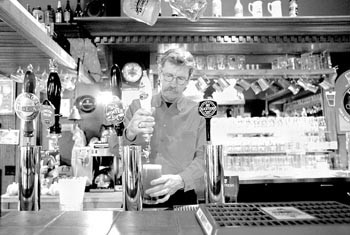 IT’S A DRIZZLY DARK night in downtown Sonoma. For once, the historic plaza is quiet and seems almost empty. We amble down one of the narrow cobblestone alleyways. The cheery sound of singing and pulsating Cajun accordion music is emanating from one building. We find that the noise is flowing from the former dining room of Babette’s Restaurant, which closed last year. No signs of the upscale, ultra-expensive French eatery remain–Murphy’s Irish Pub, formerly located on the opposite side of the alley, has moved into the site lock, stock, and (beer) barrel.

Babette’s once swanky “red room” (a romantic dining room decorated with velvet, brocade, and white linen, where the well-heeled dined on such delicacies as foie gras with white nectarines) is now a basic wood-paneled area serving no-nonsense pub grub.

The pub itself (also with dining tables) is separated inside by a corridor and outside by a charming facade of a little Irish street with three false front doors, complete with brass knockers and little windows bedecked with lace curtains. The jaunty music and neon signs glowing warmly in the windows lure us inside. There, the Frères Chapeaux, two fun-loving fellas in checkered shirts and felt hats, are gyrating in one corner. They’re belting out Cajun, Creole, and zydeco songs and accompanying themselves with a squeezebox and a fiddle.

They’ve just finished loudly performing something called “C’est la Vie.” Grinning pub-goers are applauding and raising their pints in approval. “Bet Chuck Berry never thought that song could be done by an accordion player,” declares the frère with the squeezebox. “Or by you,” dryly quips the frère with the fiddle.

According to Murphy’s calendar of events, live music is an ongoing fixture at the alehouse four nights a week. Everything from traditional Irish and contemporary Celtic to folk and blues. There are also periodic team Trivia Quiz Nights and Literary Nights, when local actors read and perform selections from famous Irish playwrights like James Joyce and George Bernard Shaw.

There will likely be plenty of St. Paddy’s Day celebrations.

And, yes, families are welcome.

IN THIS COMFORTABLE, informal atmosphere we settle right in, sliding into old wooden bench seats at a particularly antique-looking table with a slightly scarred marble top. The decor consists mainly of family photos on the walls and ledges lined with empty beer bottles.

But don’t overlook the food. Many of the items are homemade and, though not fancy, make hearty accompaniments. For instance, garlic chips ($4) and popcorn chicken ($4), both served atop greaseproof paper on a plastic tray, make good beer buddies.

The chunky French fries are hot, slightly greasy, and golden-crisp with tender middles and are sprinkled with salty, garlicky flecks. The supergenerous portion of popcorn chicken is enough for four! The deep-fried pieces of chicken breast (served with ranch dressing) are hot and crunchy with an unexpected spicy afterbite.

A housemade soup ($4 a bowl, $2.75 a cup) this night is a wintry white bean and vegetable. Thick and hearty and served with housemade raisin-studded Irish soda bread, it warms and comforts.

We aren’t too impressed by two stew dishes: a vegetable mixture of broccoli, carrots, potatoes, cabbage, celery, and barley ($6.50); and a classic Irish lamb stew with cabbage, carrots and potatoes ($7.50). The veggie version has a very watery sauce. And the Irish stew (although boasting a few tasty tender pieces of lamb) lacks depth of flavor and would be improved with a less glutinous sauce.

The best entrée in our book is the piping-hot shepherd’s pie ($9.50), with its seasoned ground beef and vegetables baked with a delicious topping of smooth mashed potatoes and mild cheese, which is heated under the grill to crisp the potato topping and melt the cheese. Very satisfying, especially with a glass of Kenwood merlot ($5). Most items are served with a choice of side dishes, including mushy peas (to which you might add salt, pepper, and malt vinegar for extra ooomph).

You’ll likely leave the establishment with a warm glow–not just from a bellyful of carbs, but from an enjoyable casual evening spent in the lively, hospitable environment of an authentic Irish pub.