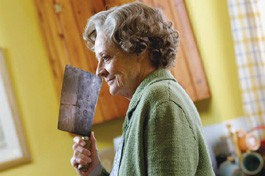 Imagine the voice of a syrupy narrator: “What happens when a trunk murderess sets things right at a dysfunctional household? And what happens if she’s played by Dame Maggie Smith?” British director Niall Johnson (Let’s Talk About Sex) transplanted this civilized Richard Russo script to England–the Isle of Man, apparently. Keeping Mum is a balm to those longing for peaceful green fields and real estate that has at last got the dampness chased out of it.

The village of Little Wallop is ministered to by the Rev. Goodman (Rowan Atkinson), whose jejune sermons are but the outward sign of a man abstracted by some underwritten spiritual crisis. He’s got it so bad that he’s given up on bonking his slender, fine-boned wife, Gloria (the slender, fine-boned Kristin Scott Thomas). Distracted by her nun’s life, she is forced into the arms of a Yankee (hiss), the local golf instructor played by Patrick Swayze who wears unfortunate underwear and who’s evidently been aging like prime rib in a meat locker.

The Rev. Goodman, like many ministers, is a nice enough person as long as you keep him off the subject of religion. He is oblivious to the seduction of his wife, as well as the problem of schoolyard bullies working over his son (Toby Parkes). And he’s somehow overlooked the matter of his daughter (Tamsin Egerton), who is running half-dressed and amok with the local boys.

At last, to correct this out-of-balance life comes Mary Poppins, or rather, the new housekeeper–a frighteningly calm, recently paroled trunk murderess. She still has her trunk ready, and the ability to rationalize a necessary murder or two or three.

Grace Hawkins is played by Dame Maggie Smith, and Smith is the hook upon which this tidy but tiny farcical film hangs. The lady’s face is quite kaleidoscopic, and one can find a killer’s malice as well as lilac-scented gentility in her, depending on how the light hits her. There’s only one point where the film is extreme enough to justify Keeping Mum‘s aims at being a black comedy: when we’re invited to share Smith’s smile at the injury of a child. The child was a bully, so I accepted that invitation.

As in Mrs. Palfrey at the Claremont, Keeping Mum intends to be a late-period example of British steadfastness in the face of American mania, the kind of film in which the extreme of sensual pleasure is indicated as the treat of sleeping late. Notice that, despite Swayze’s meaty caresses, Scott Thomas looks most rapt when covered by cozy blankets.

Smith is the center of the film, but because of the too-well-bred script, Atkinson doesn’t get to provide some drama by counter-example; he never raises a pastoral objection to the idea of killing one’s noisy or nosy neighbors, for instance. Atkinson can’t really get a toehold amid the film’s smoothness. He has a small portion of physical comedy as an amateur soccer goalie who can’t keep his head out of the net. But mostly, Johnson forces this marvelous comedian into Dick Van Dyke levels of sententiousness.

Grace fixes the minister’s marital problems by advising him of the romantic implications of the Song of Solomon. Apparently Goodman never heard this in seminary school. Atkinson’s voice, buttering over that fulsome Biblical poetry, is of a constant ookiness, compared to which murder is only a misdemeanor.