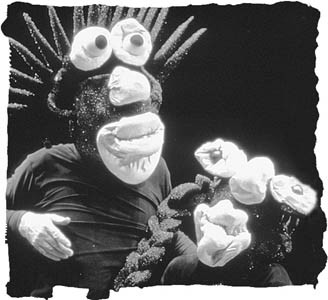 Wordless testimony to power of movement

TOILET PAPER is an ephemeral medium–certainly not something on which you’d want to launch a career. Yet the Swiss-Italian mime group Mummenschanz did just that with one of its earliest masks, which had functional toilet-paper holders at the appropriate places for eyes, ears, and mouth.

In fact, one of the first numbers that Mummenschanz cofounders Andres Brossard and Bernie Schürch presented to an international audience was called “All the Toilet Paper in the World Is Rolled Backwards.”

Reporting on this and other acts from the 1971 Festival International de la Pantomime, Berkeley performer and educator Bari Rolfe applauded what she called “absurdist mime” as an exciting, if polarizing, force in the changing world of physical theater.

On the more conventional side of the fence were Marcel Marceau and his imitators, tireless whiteface performers whose precise movements were in many ways a throwback to 19th-century romantic pantomime. But the future belonged to performers exploring less stylized movements and more abstract themes–performers like Mummenschanz.

“In a way we’re a bit like sculptors,” says Floriana Rossetto–who joined the group in 1971–of this creative process. “We’re in front of our material and then we feel it, we have this vision. You can’t explain it to anyone else.”

Perhaps the best-known Mummenschanz masks are the changeable ones, which the trio had originally investigated as stage devices that would allow them to change masks without having to go offstage and interrupt the flow. But the masks turned out to have their own inherent logic.

One of the first was made from a puttylike substance that could be slapped, pulled, and pushed, by the wearer or by another performer, into a universe of shapes. Another early mask was composed of notepads on which facial features could be drawn and ripped away, page by page altering the expression of the mask.

And of course there was the famous toilet-paper mask. When two such masked figures then interacted, gestures of love, rejection, desperation, and understanding gushed forth, all represented by streams of toilet paper from the appropriate orifices.

THE SURREAL masks and absurd physical formations of Mummenschanz contrasted so much with what the general public knew as “mime” that they seemed to emerge out of nowhere. In fact, like many of its peers, Mummenschanz found its launch point in the work of established French mime teachers, in particular Jacques Lecoq.

“Lecoq didn’t give you the product. He gave you the process,” says Rolfe, who trained with Lecoq in the early 1960s, after getting turned off by the extreme regimentation of Lecoq’s contemporary, Etienne Decroux. “[Lecoq] pushed you to find your own way of doing things.”

Among Lecoq’s passions were masks, ranging from the classic commedia dell’arte forms to ethnic masks to carefully neutral masks of Lecoq’s devising. In his classroom, masks forced the students to work through the body and to learn and express the truth of the mask through movement.

“Anybody who’s studied with Lecoq knows that a mask has a geometry and grammar all its own. You put the mask on your face; in spirit you have it in your whole body,” says Eliot Fintushel, a performer, writer, and instructor in Santa Rosa. “Mummenschanz took that literally, and wore it on their whole body. They demonstrated the principles in the most simple and gigantic way imaginable.”

But Mummenschanz started small. Soon after Rossetto joined Brossard and Schürch in 1971, the three went into creative isolation in a country studio in Switzerland. In a 1974 interview with Bari Rolfe for Mime Journal, Andres Brossard (who died in 1992) recalled the experience: “That was the moment we suddenly felt things coming out of us which were absolutely our own, not influenced by anything or anybody.”

BY THE EARLY 1980s, Mummenschanz had come off three years on Broadway and years of successful touring in progressively larger venues. Not surprisingly, the mimes’ second program featured–as most works have ever since–masks that cover the performer’s entire body and beyond.

This has a practical side: the audience in the back of a large venue needs to be able to see the action. But playing large and relying on economical gestures also has profound roots in the science and art of movement.

“In a gunny sack, life is much simpler,” says Fintushel. “You’re reduced to elements of speed, shape, and weight. And it’s amazing how much can be expressed just through those dynamics.”

Mummenschanz masks are so abstract that many interpretations become possible. Even the programs are drawn out as one long panel of shifting shapes and figures, rather than written, which leaves each viewer free to decide what is happening on stage.

“We are not telling the audience what they have to see or understand. It’s all up to the individual, and that’s what makes the people so happy about it,” says Schürch. “They don’t have to walk out of the show and think, ‘Oh my god, I didn’t understand anything. I’m so dumb.’ They are respected as a whole human being.”

For the current show, “Next,” the Mummenschanz players, now numbering four with the addition of American performers Tina Kronis and Richard Alger, step outside the mask to collectively manipulate it.

The performers are several steps removed, literally, from their own bodies–yet still the mask must remain inside the actor’s soul. “There’s an incredible tension, just lifting up a thing at the right moment and joining it with the others to make one character,” says Rossetto.

So if the mask is removed from the body, moved from the outside with sticks, isn’t that a puppet? Yes, in some ways. It’s also a sign of the postmodern (con)fusion in theatrical arts. Performers freely borrow from other disciplines, with a resultant blurring of boundaries.

For instance, the Portland, Oregon-based Imago, which in the early ’80s was often compared with Mummenschanz, now has veered toward conventional dramatic theater with a decidedly unconventional use of object and movement. For a recent production, Imago developed a set that moves and tilts around a central pivot point.

“We were ready to do completely new movements,” he says, “to move on the playground where everything all of a sudden is possible.”