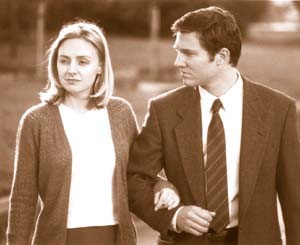 LIKE the similarly misfiring American Beauty, Mumford is a black comedy that bleaches out to oatmeal-gray by the last reel. Mumford is a more promising tale than the already overpraised Beauty, which is why it’s even more of a pity that it gives up the ghost in the last hour.

The film–much of it shot in Petaluma–stars Loren Dean as a psychologist named Dr. Mumford who is treating several neurotic types in an imaginary Sonoma County town, also named Mumford.

Among these many sufferers, Dr. Mumford’s favorite patient is Sofie (Hope Davis), purportedly stricken with Epstein-Barr, but apparently only in need of some male attention.

It’s an interesting cast, but these characters are only types, whose eccentricities are contrasted with the inhuman smoothness of the doctor. It would take some master plotting to weave these characters into a neurotic’s version of Our Town. Dean’s infuriating calm helps keep the movie from falling apart, for a time. His face is like a police composite sketch, and he has the reserved, bland menace of the flat-faced ’60s movie villain Henry Silva, whom he resembles. Mumford hooks you with the doctor’s sinisterness and then lets you off–far too early in the story–when it explains who Mumford the man is and how he arrived in Mumford the town. At first Mumford seems like a story of Ripley, novelist Patricia Highsmith’s talented wolf who feeds on the rich, silly sheep of the world. Then Dr. Mumford turns into a good shepherd: a practitioner who may not have a degree but has lots of heart.

Lawrence Kasdan, screenwriter and director, creates a town ripe for the plucking. That the townsfolk all turn out to be nice guys, including Mumford, seems a disappointment.

WHAT’S GOOD about the film? Danson, oafishly blowing his cigar smoke in a balloon snifter, in which a pint of brandy floats; as he slurps the smoke back up, he quotes his philosophy of life: “Like the Zen say, ‘Be here now.’ ”

I always enjoy seeing the pointed, foxy face of Hope Davis–the smartest blonde in the movies today–her alertness giving her pale-lady role an arrogant kick. (Mumford offers her a place on his therapist’s couch, and she replies, “I’d better not, because I’d fall asleep. I think it’s too soon to start sleeping with you.”)

The first appearance of Martin Short, as a nasty lawyer, is a promise of fun to come, although Short turns sweet and obsequious as a bellboy later.

Still, a promise is a promise, even if it’s broken.