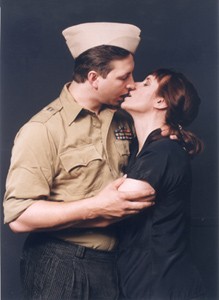 ACTORS’ THEATRE’S production of William Shakespeare’s Macbeth (directed by Carla Spindt) is more than “a walking shadow, a poor player, that struts and frets his hour upon the stage, and then is heard no more.” Some of the time.

A concentrated study of ambition gone awry, Shakespeare’s title character (played by J. Eric Cook) is cousin and general to Duncan, King of Scotland (Tim Earls), occupying a place in the royal line comparable to being in middle-management. This hardly suits the enterprising Macbeth or his Stepford wife in-the-extreme Lady Macbeth (Sheri Lee Miller). What’s a careerist Scotsman to do? Why, kill the king, assume the throne, and then write “How to Commit Regicide and Influence People,” of course, as per the questionable premonition of a triumvirate of witches.

Macbeth does the deed and offs the king–as well a handful of others to thwart the discovery of his deed–but of course, the blood fest leads to his own comeuppance.

While the production is certainly not a failure, it is spotted with uneven and often thin performances. Fortunately, the key roles are played with enough theatrical muscle to carry the play. Cook is a marvel as Macbeth; he is that rare conflux of talent and intelligence that is creative without being cretinous (as is the wont of many a shabby Shakespearean). Cook’s rendition of Macbeth’s famous “Is that a dagger I see before me?” monologue is as fresh as it is superb, and he is well complemented by Sheri Lee Miller’s engrossing performance as Lady Macbeth (Miller convincingly portrays her character’s gradual descent from guilt into madness). Miller proves especially adept at conveying Lady Macbeth’s desperation for power and her bitterness that her ambitions can be realized only vicariously through her husband.

Argo Thompson approaches brilliance as Macduff. His lament over the execution of his wife and son marks a noteworthy moment for acting on local stages. Robert Conard also turns in a keen performance as Banquo, Macbeth’s jocular confidant. Though played for comic relief, Conard refreshingly never sacrifices the character’s humanity for an easy laugh.

Throughout the play, Macbeth is dogged by the presence of the three witches (Jeanette Harrison, Matthew Proschold, and Priscilla Stewart), whom the director has double cast in smaller roles, though they maintain their sorceress mien and costume. The effect suggests that the witches are power-hungry weirdoes ready to manipulate circumstances for their own benefit or at least sport. Spindt has opted for the roles to be played more like ’80s Goth people than the usual warty crones of the craft.

LOOKING A LOT like The Cure on a bad day, the three witches are clad in black turtlenecks and trench coats, in stark contrast to everyone else on stage, who are haphazardly dressed in quasi-military duds that are part of the director’s unconvincing attempt to set the play in the World War II era.

Many of the scenes are overplayed to the detriment of the production. Audiences may take a guilty pleasure in the demise of Lady Macduff (Naomi Sample) and her son (Harrison) at the hands of Macbeth’s henchmen–a duo garbed like the so-called Trench Coat Mafia of the Columbine massacre (Proschold appears here and deftly evokes menace by taking the child’s toy)–just to see the precocious kids shut up.

Moreover, Spindt’s inclusion of sight gags often decompresses the drama, as when Macduff’s son peruses a National Geographic with lustful eyes. Though the production is imperfect and often lags, a handful of performances make it a worthwhile evening of theater. As Macbeth says, “If it were done when ’tis done, then ’twere well it were done quickly.”