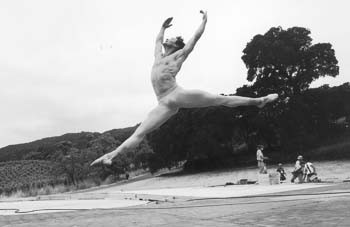 Peak experience: Lawrence Pech soars above the half-completed stage at the Vineyard Theater. Behind him, workman continue preparations for the Mountain Play’s upcoming second season in Jack London State Park.

Is Mountain Play in Glen Ellen to stay?

BEAUTIFUL, isn’t it?” says dancer Lawrence Pech, gesturing broadly out at the green vineyards rolling away in the distance. The steep slopes of Sonoma Mountain stare impassively back. Jack London State Park is a busy place on this overcast June morning. The bird songs are almost drowned out by the whine of saws and the thump of hammers. Pech smiles cheerfully and takes in the view as he moves with nimble ease among the burly carpenters who are pounding away at the wooden stage rapidly rising off the wet ground of the grassy meadow. A woman out for a hike stares in wide-eyed surprise at the activity.

Both the small army of carpenters and the graceful Pech are part of a massive effort to export Marin’s venerable Mountain Play to Sonoma County. This year marks the second half of an ambitious two-year cultural experiment. Soon the extravagant set of Hello, Dolly! will be trucked north to crown the broad plywood stage taking shape on this damp grass. Then Pech will hit the boards as a featured dancer in the production.

But Jack London State Park is a long way from the 4,000-seat stone amphitheater on top of Mt. Tamalpais. Just how well can this trademark Marin experience expect to fare outside the misty environs of Mt. Tam? Are Sonoma County and the Mountain Play ready for a long-term relationship?

Old age sometimes has rich rewards. For 85 years, the Mountain Play has been staging lavish productions ranging from The Tempest to South Pacific. But in the mid-’90s, the organizers realized they had a problem most theater companies would die for–an overwhelming demand for tickets.

The number of people willing to make the hike up Mt. Tam to the theater overlooking San Francisco Bay mushroomed for many reasons. Some people were attracted by the tradition of community celebration that had built up around the event. Others were drawn by the increasingly spectacular productions, which included such special effects as the airplanes that buzzed the stage last year during South Pacific. This year, the play cost nearly $800,000 to produce, up from $13,000 in the late ’70s. Whatever the draw, the company was turning away teeming crowds of would-be spectators.

“We realized that we were losing 3,000 to 5,000 people a year who would have loved to see the show,” says Marilyn Smith, who has produced the Mountain Play since 1977.

Why not simply add more shows in Marin? Because the production company’s agreement with the state limits them to six performances a season. The only solution was to find another venue, and the company cast its eye north because many audience members in Marin were making the pilgrimage from Sonoma County.

THE MOUNTAIN PLAY organizers are not shy about calling their experiment here a success–so far. Indeed, Pech says ticket sales were so hot that for a time the Sonoma County shows were selling out faster than those in Marin. Moreover, the play has found eager sponsors among local wineries–including Kenwood Winery–which seem anxious to put a local stamp on the production.

But the company also has not made a final decision to return next year, and won’t do so until a Mountain Play Association board meeting in September. It all depends, say the organizers, on how well Hello, Dolly! fares this summer. It seems that one year of sold-out performances is not enough; the Mountain Play wants to be certain it has correctly gauged Sonoma County’s appetite for performing art.

“The best way people can show their interest is to buy up tickets for this year,” says Smith, a bit hopefully. She quickly adds that a special family bargain rate is available for the weekend of July 4–ticket sales have been sluggish for those shows.

A successful season could mean more than just the return of the Mountain Play. A lavish performing arts festival may also be at stake. Pech says his dance company is planning next year to stage a production– tentatively titled “Valley of the Moon Festival of the Performing Arts”–on the same stage the play will leave behind. The production will feature both classical and modern dance, music, and poetry.

“There’s nothing else like it on the West Coast that I’m aware of,” says Pech, whose Glen Ellen home lies just a couple of miles from the park.

But will all this really fly in Sonoma County? Pech– who trained with ballet star Mikhail Baryshnikov–says yes. He thinks the Mountain Play has already demonstrated the area’s growing appetite for the performing arts. He also says he will work hard to impart a local flavor to his production. To that end, he is planning a reading of Jack London’s work at the festival.

“I want to pay homage to London,” says Pech. “I don’t just want to paste us into any old park.”

OF COURSE, the success of the Mountain Play will hinge on more than just the county’s appreciation for the arts. The production must also overcome some of the logistical problems it experienced last year.

Chief among these was a daunting transit snafu. The shuttle buses slated to transport the audience members from off-site parking to the park theater somehow got lost. That left some people waiting on a soccer field behind Sonoma State Hospital for more than hour.

“It was a big stinker,” says Smith with a rueful chuckle. “We can laugh about it now, but it wasn’t too funny then.”

The same bus company is in charge this year, but Smith says this time their directions are clear. New bleachers will also insure a more comfortable experience for taller audience members.

Of course, the larger question is how comfortably the Mountain Play will sit in Sonoma County. Smith and Pech say they are cautiously optimistic about the play’s future here, but nobody is making any promises.