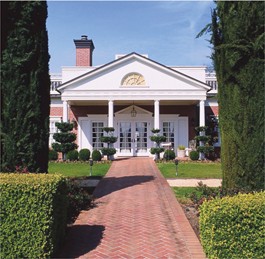 The Napa Valley of today is surely one continent and two centuries removed from the Virginia of Thomas Jefferson’s time, when an agrarian elite of wealthy landowners presided over vast, verdant plantations of monocultural crops. All the same, the ever-popular Founding Father would have found much to be excited about here. Like many successful persons before and since, the energetic politician, scholar and farmer became entranced with wine during his travels in France. Jefferson was the first to import cuttings from the vineyards of Europe, and although he’s more closely identified with a love of wine than any other American president, he had no success with his plantings at Monticello.

After careers in government and banking, Jay Corley discovered the Napa Valley by way of Southern California, Virginia and points between. In the early 1980s, he built Monticello Vineyards in tribute to Jefferson, and sons Kevin and Chris continue the tradition, producing 15,000 cases in Napa’s Oak Knoll district.

Styled after the original Monticello’s neoclassical architecture, minus the dome, the estate’s signature building is called the Jefferson House. The chief disappointment is that winetasting is not conducted in this administrative building, although the parklike picnic grounds offer visitors a pleasant space to enjoy the scene. Instead, classic rock from speakers hidden in the shrubbery beckons visitors to a small room in the winery’s production building, where the small staff present a comfortable, family-run winery atmosphere.

Corley chose the south valley to focus on Burgundian varietals. The 2008 Estate Grown Chardonnay ($28) has a nutty, pecan-pie aroma and a sticky finish; the 2007 Estate Grown Pinot Noir ($38), a cherry-pie-filling aroma, with chicory spicing up fruity flavors. The 2007 Estate Grown Syrah ($38) is as pleasant as a Napa Syrah can be, but predictably upstaged by the Bordeaux varietals. Looking around, I wondered if someone had inadvisably worn perfume to a tasting room; the 2007 Estate Grown Merlot ($34) exudes a floral, plummy perfume, chocolate cordial cherry candy, while the sweet fruit is wrapped up tight on the finish.

With cool, bay-tree aromas meeting warm-berry compote, the Corley Proprietary Red Wine ($55) lays raspberry and tea leaf flavors over sinewy, lingering tannins. Enjoying a home-grown American wine such as this, however, is nothing like paying tribute to the nation’s unlucky father of our wine culture—the sage of Monticello would surely have coveted it for his own cellar.