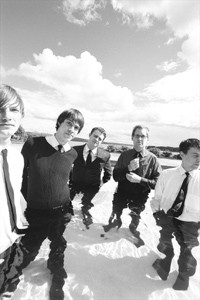 The New Math: Minus the Bear adds up to a revitalization of the Old Vic.

Minus the Bear, Plus the Rock

The Old Vic gets back in the habit of rocking out

Minus the Bear are serious musicians, but you’d never know it scanning over their song titles: “Hey, Wanna Throw Up? Get Me Naked” and “Pantsuit . . . Uggghhh” hint not at Minus the Bear’s prog-tinged yet eminently catchy sound, but at their refreshing sense of humor. The end product is the kind of band that attracts fans with songs about girls, drinking, getting it on with girls who drink–all of life’s good things, I suppose. It’s the stuff of young life in a shared house stocked with extensive CD collections, and furnished with sofas sporting cigarette burns.

This irreverent tone colors all of the band’s music; it’s like Emerson, Lake, and Palmer playing dork rock–the best of both worlds! Unexpected time changes, prominent use of finger-tapped guitar, and keyboard infusions continually point their songs in surprising and rewarding directions.

Minus the Bear is touring in support of their first full-length release, Highly Refined Pirates, which features 14 more catchy, inspired songs with equally inspired titles. They’ll be playing at the Old Vic in Santa Rosa on Sunday, Feb. 2, as the headliner for a lineup that looks to be a nice little indie-rock bonanza.

Supporting band Roots of Orchis have been playing together in various forms since 1997. Having originally sprung up from San Diego’s hardcore scene, Roots of Orchis hit the ground running, recording albums and touring relentlessly. Their songs are carefully crafted postrock instrumentals, with jazz drumming rolling over dual bass lines, chiming guitar chords, and intricate layering of melodies (think Oma Yang or Tristeza).

Their third album, Some Things Plural, was released in February, 2002, and contains the addition of electronic noodlings–turntables, analog synths, drum programming, and samples–to the artful live instrumentation.

Also playing are Lead Vein (“lead” as in “Leadbelly,” not “leader of the pack”), a semireunion of drummer Caitlin Love (ex-Desert City Soundtrack) with two of the guys from Lucas, a loud and powerful-sounding band from Sonoma County a few years back. Lead Vein’s members were part of that whole Santa-Rosa-kids-migrating-to-Portland phenomenon. It’s understandable–people have to move, you know. And then they come back down here to play shows. It’s a win-win situation.

Speaking of the Old Vic, drummer-about-town Jesse Wickman (who has probably been in more bands than Chuck Biscuits, Stewart Copeland, and Joey Waronker combined), has been doing the booking for the Old Vic since October. “I’ve been playing at the Old Vic for years in all kinds of different bands, and there’s never really been any momentum,” says Wickman, who currently plays with the free-jazz outfit Frenzy, the pop-punk band Inkwell, and others.

“What I’ve been trying to do is turn it into a place where people will say, ‘What should we do tonight? Let’s go the Old Vic, there’s probably something happening.’ It was the other way around for a long time.”

The improvement is easy to see. For a few years, shows with bigger bands like the Pattern and the Black Heart Procession were the exception to the rule. But now the local pool of talent is filtering in more–from indie bands like the Setup to a weekly gig with Lucky Otis–and Wickman aims to book more touring bands with higher name recognition.

So with higher profile bands gracing the Old Vic’s little stage, there’s more reason to get out there, enjoy a pint of quality ale, and bob your head up and down to the band like a good little live-music fan. As this here show should be a case in point.