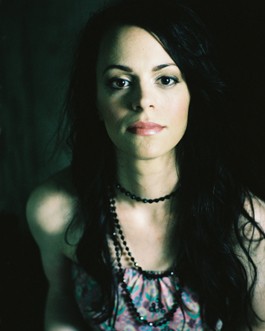 Mindy Smith is not cool, and she’ll be the first one to tell you so. Adopted by a minister and his musically gifted wife, Mindy was raised in the northern part of Long Island. Her first influence was her mom, the choir director at the church. The family listened to Christian music in the house, with an occasional John Denver record spun on the turntable. Smith took to singing whenever the spirit moved her, which caused some raised eyebrows. “I had to learn how to not be excited about singing as I was walking through the mall,” she remembers. “My teachers hurt me a lot too, when I’d do it in class. That led to learning how to not love having music stuck in my head.” Like many high schoolers, Smith tried to be invisible, immersing herself in the Cure during the week and singing in her mama’s choir on the weekends. “I wasn’t even cool enough to be Goth,” she says with a laugh.

At 19, Smith left home for a Cincinnati bible college and, when her mother passed away, relocated to Knoxville to be with her father. A late bloomer, Smith didn’t pick up a guitar until she was 23. With a wistful soprano that is somehow both worldly and childlike, she began writing songs. Soon she scooted westward to Nashville. Her first break came when she was asked to appear on the 2003 Dolly Parton tribute album, Just Because I’m A Woman, the only unsigned artist to be approached. Her eerie cover of “Jolene” became a hit, with Dolly claiming Smith’s version outshone even her own.

Smith’s 2004 debut One Moment More brought more accolades. With songs about faith, including the single “Come To Jesus,” Smith’s internal struggle between the secular and the divine fueled her songwriting like therapy does a Manhattanite.

With her sophomore release Long Island Shores, Smith, now 35, has produced another fine collection of tunes, returning to her birthplace to exorcise old ghosts in the title track, but to also embrace her adopted home, as with “Tennessee.” Often compared to the likes of Patty Griffin and Alison Krauss, Smith has made the circuitous route from Nesconset, N.Y., to Nashville seem pretty darn cool.