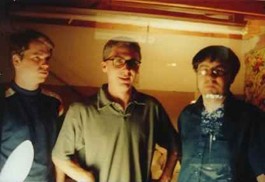 Six years between the first album and this newest is well worth the wait.

Electro Group’s first album, A New Pacifica, came out in 2001. I own three copies, and I never get sick of listening to it. Which is fortunate, because it’s taken six years for the Sacramento trio to release its follow-up full-length album, Good Technology.

Underwhelming neo-shoegaze bands are a dime a dozen, but Electro Group&mdashwhile they do owe the Boo Radleys and My Bloody Valentine a debt&mdashfirst and foremost sound like Electro Group. Sure, they’ve got the thick layers of fuzzed-out bass and distorted guitar and semi-buried vocals, there’s something punky about Electro Group; their songs are generally short, direct and driving rather than gauzy and dreamy. Melodically, they get in there and out of there without messing around, though their economy offers no less of an atmospheric payoff.

Guitarist-vocalist Tim Jacobson, bassist Ian Hernandez and drummer Matt Hull have been a band since 1994, but Ian and Tim go back even further. “Ian and I became friends over the Cure,” Jacobson says. “‘Lullaby’ was the first song we played together. We were called Graham Cracker Cyclone.” Hull, who was primarily a guitarist at the time, joined the band later on, shortly after he’d acquired a drum kit from an ex-roommate who’d slagged off on rent.

Electro Group are the kind of guys you want to sit around and drink beer with, but because of logistics (Hernandez now lives in Seattle), we made due with a conference call. A lot of what we discuss boils down to the dirty (and terribly unromantic) little secret of the underground music universe: sometimes it’s the nitty-gritty stuff, like access to certain types of recording, that dictates what happens to a band and when it happens.

“When you record yourselves, it’s a blessing because you can take as much time as you want…but it’s a curse, because you do take as much time as you want,” says Jacobson. “We were committed to recording with old-school tape machines…the songs on Good Technology were probably recorded within the span of a year, but the mixing took so long. Because every time you mix with a tape machine in a traditional mixer, you have to start over again. It’s not like your computer, where it’s saved.”

Hernandez described the mixing board they used on A New Pacifica as “a big steaming pile of crap.” (Indeed, the somewhat crappy sound quality of A New Pacifica is one of the things I love most dearly about it.) Good Technology sounds like the same old Electro Group, but better&mdashliterally. Over the years, the guys have greatly improved the quality of their recording and mixing, resulting in a less sludgy sound.

It contains songs the band has been playing live for years, but they are brighter, crisper. The glory of Good Technology is “Hong Kong Blues,” a new mix that improves vastly upon the 7-inch version released by the band a number of years ago. After a goofy sing-song intro, out of nowhere the song bursts into overdrive, with a dizzying, crunchy guitars and growling bass. “Periphery” begins unassumingly enough, but after a few seconds sneaks into a beautiful chorus that balances the counterpoints of aggressiveness and loveliness that make Electro Group so appealing.

Words are not of utmost importance in Electro Group’s musical universe, which is why I was surprised to see that Good Technology includes a lyric sheet. “I’m not a big fan of lyrics&mdashI don’t even know the words to most of my favorite songs,” Jacobson says. “I try to make it coherent in a very vague way, but really I don’t give a shit. I think it’s cool that people read stuff into it or whatever, but it doesn’t make or break the song for me.”

With Hernandez in Seattle, the band has switched over to a long-distance songwriting and recording via computer. “We have much less defined roles,” Matt Hull says. “I’ve actually played more guitar in the last six months we’ve been recording than I’ve played drums, Tim’s got a lot of drums on some of the songs. We’re all throwing down whatever sounds good.”

When will we get to hear this new stuff? Experience has taught us fans not to hold our breath, but considering I’ve been listening to it multiple times daily with no signs of stopping, six years of Good Technology seems like not such a poor fate.