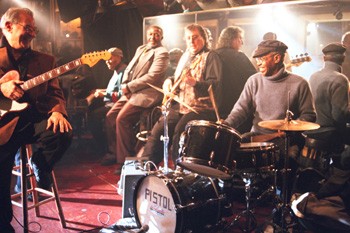 Rebecca Miller’s newest movie, Personal Velocity, is a small, dark, difficult film that is full of surprises, is highly literary, consistently brilliant, and pretty much impossible to shake off. As such, Personal Velocity is seemingly unmarketable as a major mainstream movie.

In other words, it’s the perfect film-festival film.

Which may be why the 25th annual Mill Valley Film Festival (running Oct. 3-13) has chosen Miller’s movie to close out this year’s 11-day movie-grazing event. Not only is it the work of a gifted writer-director with a prodigious pedigree–she’s the daughter of Pulitzer Prize-winning playwright Arthur Miller–Personal Velocity, based on the younger Miller’s award-winning book of short stories, stands up as a potent example of what is good, necessary, electrifying–and frequently frustrating–about that modern cinematic phenomenon that is the film festival.

“There are a lot of movies that are, for lack of a better term, film-festival films,” states Chris Gore, author of The Ultimate Film Festival Survival Guide. “These are films that may only work with a specific kind of audience, and that is an audience of avid moviegoers, the kind of audience who goes to film festivals and who just can’t get enough of nonmainstream stuff.”

Now it’s true that such movies do sometimes cross over to the cineplexes. The Blair Witch Project is one example, though no one’s saying it was literary or brilliant, just small, dark, and hard to shake off.

But it is rare in the extreme for that to happen, because it requires the efforts of a fully funded distributor with loads of vision, excitement, and energy, who also happens to believe that the film will make them a bundle of money out there on those mean, festival-free streets. When the big sale does not come, those inspired but unmarketable films are left as little more than a calling card–and example of what that filmmaker is capable of–to show future financiers and family members.

Or they remain the personal property, so to speak, of those festivalgoers with the stamina and courage to take a chance on an unknown quantity. Perhaps that film will develop good word of mouth, start some serious buzz. Maybe it will pick up a few awards along the way and end up leaping over, in spite of the odds against it.

“I always like to believe it can happen,” Gore says. “And it certainly could happen in the case of Personal Velocity.”

Then again, Gore is an admitted optimist who sees a lot of bad movies, so one can’t fault him for championing any film that smacks of quality and intelligence, both of which characterize Miller’s movie.

The More Things Change: The MVFF continues to impress.

Personal Velocity is stunning. And unpredictable, in spite of the fact that it sounds a lot like a Lifetime Channel movie of the week. It’s not.

The film has already accumulated some prestigious prizes, including the big one at last January’s Sundance Festival: the Grand Jury Prize for Drama. It doesn’t hurt that Miller’s previous film, 1995’s Angela, took that year’s awards for Best Director and Best Cinematography.

On the other hand, those honors didn’t exactly propel the edgy Angela into mainstream status. Still, it was enough to make United Artists open the old wallet, however cautiously. Personal Velocity is scheduled for a Nov. 22 art-house-only release, but good word of mouth could, one supposes, take the film even further.

Personal Velocity (“Everyone has their own personal velocity,” observes one of the film’s characters) is populated by a strong cast of truly fine actresses who’ve either got solid indie-film credits (Parker Posey, Fairuza Balk) or who stand to gain some of that with their performances in this film (chiefly the suddenly remarkable Kyra Sedgwick). The low-low-low-budget film is a trio of tales linked together by the merest of threads: the same radio newscast, reporting a slightly freaky traffic accident, is heard in the background of each story, in which a different woman faces a crossroads moment of crisis or decision.

It starts with Delia (Sedgwick), a physically abused wife and mother who falls back on her once formidable sexuality as a way of reclaiming some sense of power. Oscars have been given for the kind of performance Sedgwick gives, anchored by the scene in which she tries in vain to literally stifle a powerful flood of tears and wailing and almost terrifying grief.

The second story follows Greta (Posey), a happily married book editor whose latent ambition is awakened when she gets an unexpected promotion. At one point, she seriously considers leaving her husband when she reads his Ph.D. dissertation, and is horrified to discover that he’s an overly redundant writer.

In the final segment, a pregnant goth girl (Balk), on the run from a traumatic event in New York City, picks up a strange, silent hitchhiker and finds herself awakening to a sense of kindness and empathy she doubted she was even capable of.

Each segment is extensively narrated by the unseen John Ventimiglia, and it is this muscular and pitch-perfect commentary–taken almost verbatim from the book–that gives the film its extraordinary literary aura.

Fortunately, Miller (who is married to actor Daniel Day Lewis), finds plenty of images to match the power of the narration, yet the film feels all but baptized in well-scented prose, which helps carry the film into wholly unexpected waters.

“Those kinds of journeys are the most fun,” says Gore, “the moviegoing journeys in which you have no idea where you’re headed. Were not just talking about radical stories but radical ways of telling stories. Again, that’s what I love about film festivals and independent film.

“Hollywood may come along and mine a lot of that stuff, might end up turning out a mainstream version of some radical storytelling approach, but the film festivals are the places to catch this stuff in its purest, most original form.”