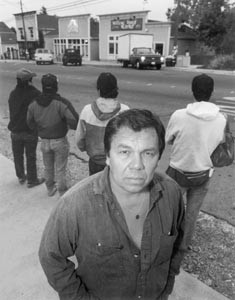 Spanish, spirit, and song grate some in Graton

MARIO RAMOS is one of the lucky ones. Eldest son of 11 children in a poor Puerto Vallarta family, Ramos came to the small west county town of Graton as an exchange teacher in Oak Grove school’s bilingual program, and now owns Mexico Lindo, a nice little restaurant in town. He’s known as “profesor” among the Latinos here.

Nancy Kesserling, who knew Mario at Manzanita School, calls him “an angel in the community.”

She says he brought “Spanish, spirit, song–and soccer” to the school.

Now, Graton is in the midst of a major gentrification project that is putting local migrant workers at the heart of a heated public debate–and Ramos is stepping forward to help mediate the dispute.

A former school principal who oversaw the upgrade of his rural school with new classrooms and bathrooms with funds from the Rotary Club, Ramos is no stranger to community process.

And he’s not a man to forget his origins.

As long as anyone can remember, Mexican migrant workers have come here to work the orchards and the vineyards. For years, they’ve been lining up on summer mornings waiting for work, and lingering in the streets in the evenings before settling down to sleep under a local bridge.

They work hard, Ramos says. Whenever he has recommended workers to local people, “they have thanked me,” he adds.

THIS SUMMER Ramos went so far as to drive a van full of workers to help install a vineyard in Cazadero. Most of the money goes back to the workers’ families in Mexico. Sometimes they save the money to get a jump start on a business there.

One young man wanted to become a fisherman. “Down there, the government is so corrupt, he had no way to make money for the boat,” Ramos explains. The man earned that money here, and went home. Some say the number of workers has increased this year, but no one knows.

Certainly the gentrification of Graton has changed the scene’s backdrop.

The bars are gone, old buildings have been demolished, and new shops and restaurants have sprouted, one of them belonging to Ramos. Some of the new business owners have complained that the presence of migrant workers on the streets just doesn’t look good. Ramos, who has always been involved in the dialogue, was invited to address the problem at community meetings in 1993.

He began talking with the men about such unseemly behaviors as drinking on the streets.

“I talked to the guys–they understood,” Ramos says. “I said, ‘We don’t want the people to see us doing bad things.’ “

Since then, the men have learned to monitor themselves.

Beyond that, Mario says the community did not know what else it wanted to do, and the meetings stopped.

Still, many workers remain unhoused, and this year Graton environmentalists became concerned about garbage and pollution in the creek, produced by those workers who live under the bridge.

GASP, a group of citizens organized around the sewer issue, has proposed installation of two porta-potties in town for public use, under funding provided by bottling company AVG for creek restoration, after North Coast River Watch threatened to sue the company for inadequate disposal of waste.

The atmosphere was congenial. Residents appeared willing to work together to come up with solutions. The workers “are not committing violent crimes,” confirms Deputy Raasch.

Even then, “There’s a certain amount of race-based fear in the Anglo community,” says Craig Curley. A contractor, he works comfortably with many Latinos, but he knows women who are afraid to walk through town.

Merrilyn Joice, editor of the town’s Graton Gazette, has pointed out that most women she has queried speak not of fear but of “discomfort” about whether or not to say hello.

Principal Waliszewski told the meeting that he has “never seen anything inappropriate” when the men use the school basketball court, but he has recently received calls from concerned parents whose children are afraid to go there after school.

Proposed solutions include a park or community center, not only for the workers, but for youth, some of whom are now sporting gang colors.

“I’d rather have the workers than the Graton Boys,” says Curley, referring to alleged local gang activity.

Ramos would like to see some cooperative housing that could help get the workers off the streets. “The vision I have is some kind of place they can come to and pay for–a brasero program,” Ramos says.

“Let everyone do their part.”

Citizen participation and contributions are invited at the coming community meeting, Tuesday, Nov. 17, at 7 p.m., at the Oak Grove Elementary School, 8760 Bower St., in Graton.