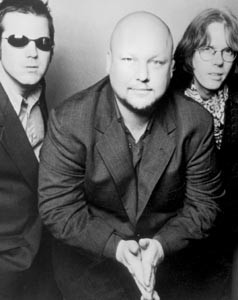 BECK SAID in an interview once that every song is like its own nation: “It has its own laws,” explains ex-Pixies kingpin Frank Black. “I really think that’s true–they come out the way they come out. I’m really just delivering the next batch of songs, whether people like that or not. I almost don’t have any control over it.”

Sounds mystical, but the latest batch of songs out of the blue has served this alt-rock innovator well. Frank Black and the Catholics (SpinArt) has garnered rave reviews for the singer, songwriter, and guitarist Rolling Stone once credited with fronting “the quintessential college rockers”–a major influence on Kurt Cobain and the alt-rock revolution that followed Nirvana’s 1991 pop chart ascendancy. It’s “the kind of weirdo rock that inspired 1,000 bands to call themselves ‘alternative,’ ” the Philadelphia City Paper recently opined about the rocker’s return to form. “Black invents and takes risks but stays true to his sound.”

And what a sound. Seductive pop melodies. Balls-to-the-wall surf riffs (“like the Beach Boys on acid,” a critic once noted). Otherworldly lyrics. Black’s deranged shrieks. Primal anarchy at its best.

“Even though I try not to read reviews,” admits the reclusive Black, during a phone call from his L.A. home, “it’s good to know there are some good ones out there.”

The thing that’s gotten those jaded rock crits so excited is that Black–who has been slammed in the past for overproducing otherwise sublime neo-psychedelic fare–opted this time for a raw, stripped-down approach that lends a spontaneous, vibrant spark to 11 originals and a raucous cover of Larry Norman’s honky-tonk classic “Six Sixty-Six.”

“We were feeling very proud of the demo [that became the new release], and believed that it should be a record in its own right,” says Black who fought to maintain the project’s initial integrity. “The producer thought it was the best demo he’d ever heard, and so he headed off for slicker, shinier records and we stayed with ours, captured at a moment before someone sucked all the heart out of it.

“All that tedious overdubbing and the latest fix-it-in-the-mix computer technology–we’re not interested in that. It’s rough and ready, a diamond in the rough.”

A LITTLE HISTORY. Frank Black started life 34 years ago as Charles Michael Kitteridge Thompson IV. His first taste of the rock life came while banging his guitar in the garage of the suburban L.A. home of his Pentecostal mother and stepfather. The family relocated to Boston. Rock ‘n’ roll took a back seat to other interests, namely astronomy. While living in Puerto Rico as a University of Massachusetts exchange student, Thompson decided either to travel to Australia in pursuit of Haley’s Comet or to form a band.

Rock ‘n’ roll won the toss. Back in Boston, the aspiring singer/songwriter teamed up with college roommate Joey Santiago, a rich Filipino kid with a knack for buzz-saw guitar licks. At the suggestion of his biker-bar owner biological dad, he changed his name to Black Francis, and adopted the moniker Pixies in Panoply for his band after hooking up with Ohio native Kim Deal, a novice bassist, and Deal’s drummer friend David Lovering.

In 1987, the Pixies released their explosive debut EP Come on Pilgrim on the artsy London-based 4AD label. It was followed the next year by the virulent full-length Surfer Rosa, capturing extensive college radio play and critical raves.

A major label deal followed. But by the time 1989’s breakthrough Doolittle (Elektra), which featured the college radio fave “Monkey Gone to Heaven,” hit the airwaves, the Pixies already were falling apart owing to tension between the band’s founder and Deal. The Pixies released two more albums–1990’s Bossanova (which featured some of Black’s best UFO-obsessed lyrics) and 1991’s Trompe le Monde–but by then Deal already had formed her own band, the Breeders, featuring Tanya Donelly of Throwing Muses.

“We carved out a nice little niche for ourselves,” reflects Black. “We had a good little run. But I don’t think that if we had stuck it out longer we would have been big and famous. I think that the music was far too quirky for that. The bands that sell millions and millions of records have some kind of mass appeal, a genuine pop cleverness or charisma.

“Sometimes it’s just because they’re lame and boring and that’s what people are looking for at a particular time.”

UNDER THE NEW pseudonym Frank Black, Thompson in 1993 recruited Santiago, members of Pere Ubu, and several session players and released his eponymous solo CD to mixed reviews. In subsequent years, Black fell out of favor with critics who once hailed him as an innovator but later turned against him for being too experimental. “I actually find that even my most quirky moments aren’t that quirky compared to [the avant-garde San Francisco group] the Residents or some band like that,” says Black. “I mean, compared to them I feel like I’m in the Bay City Rollers.

“But I guess it’s better to have people writing bad reviews about you than nothing at all. I’ve always been fortunate in that regard.”

These days, Black is living the good life–even the reviews are good. “I have a nice house, a beautiful girlfriend, lots of pets,” he says, sounding like the antithesis of the angst-ridden alt-rocker. “My home life is a pretty happy, warm, fuzzy experience in the California sunshine. It’s a nice thing to come home to after being in nightclubs and Holiday Inns for a few weeks.”

And as for the road, even that’s treating Black kindly. “You learn where the good cafes and truck stops are. You learn to love certain stretches of road just for the sheer beauty of it. And, of course, the big payoff at the end of most days is the gig. We get to play–that’s a great reward, getting to play at a rock show. I mean, that never gets boring. There’s always something exciting about it, whether it’s sold out or not. Whether it’s a big club or a tiny club. Whether it’s a great place or a shitty place. The bottom line is that you’re going to play music and there are going to be people there to hear you, so that always is there. There’s always a crowd. There’s always you. And there are always your instruments.