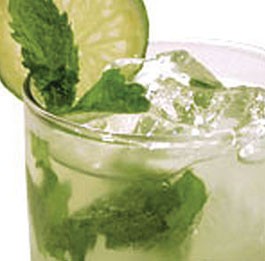 Some say that an African dialect put the “mojo” in the mojito; others, that it’s derived from Spanish for the opposite of “dry.” Author and world-class drinker Ernest Hemingway once scrawled “Mi mojito en la Bodeguita” on the wall of his favorite watering hole, conveying a sentimental fondness for the bar and for Cuba’s national cocktail with signature economy of words. The popularity of the Buena Vista Social Club and a revival of interest in all things Cuban in the 1990s gave the drink another lift off the island, and suddenly one evening in the early 2000s, it seemed that everyone at Graton’s Underwood Bar and Bistro was crazy for a delicious mojito.

The following summer, the rum-based refresher was declared “over” by trend-mongering glossies, due for replacement by some wine spritzer or other. That spritzer or other? Already long forgotten. On a recent evening, our same bartender was seen still groaning at the muddler, mixing mint, sugar and lime for an endless stream of orders. The mojito abides.

Simply constructed from some of the most refreshing naturally occurring ingredients known to man, the mojito cannot be faked with syrupy commercial products like “margarita mix.” Wanting for fresh mint? Then just forget it. But as with any cocktail, variations abound. Sebastopol’s French Garden house mojito is muddled with fresh black raspberries from their own farm, and is reported to be among the most refreshing intemperate beverages ever. Bartender George at Yountville’s Brix Restaurant allows that the mojito was “the drink” about seven years ago, but that once a classic drink is out, it enjoys a resurgence every summer. “Once I make one,” he sighs, “I’m making 20.” Brix offers a blood orange version, with mint plus basil from the restaurant’s garden.

And ever since the Topaz Room opened in 1945, downtown Santa Rosa cocktail lounges have been hailed as being “like in the big city.” The recently opened Christy’s on the Square instead harks back to the Topaz Room, while historic photographs reference the town’s bygone days. A piano and fireplace set the scene: Christy’s is billed as a comfortable spot where the over-30 crowd may mingle. Decor is a shade darker than the previous incarnation, with inviting booths and sofas, while the same distinctive, underlit onyx marble bar glows ever more iridescent as dusk draws down.

Three dollars at happy hour nets a small cheese plate topped with blackberries and candied walnuts. And does this urban bodega stock fresh mint? You bet, and it’s lightly muddled in a mojito that’s pronounced pretty good by a self-proclaimed connoisseur of same. Just don’t write it on the wall.