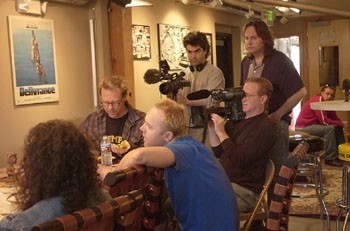 ‘Metallica: Some Kind of Monster’

Ritchie Camden was the classic Metallica fan. He sat in front of me in homeroom, and his entire wardrobe consisted of two Metallica T-shirts. I spent many an unhappy hour staring at his back, completely befuddled by this band’s appeal. Based on the aesthetic of their T-shirts, Metallica sang about skulls and hammers and long, frizzy hair. Ritchie Camden slumped around school, his zitty face obscured behind a curtain of chin-length greasy hair and his skinny shoulder blades jutting out of threadbare Metallica shirts. He had to retake seventh grade a few times.

That, to me, was the public face of Metallica for years. So where were all the Ritchie Camdens now? At the opening of Metallica’s big, honking documentary, Metallica: Some Kind of Monster, in San Francisco– the band’s hometown, no less–not one metal-shop metalhead could be seen. Instead, there were lots of regular, everyday guys, most of them in their early 20s with regular, everyday girlfriends in tow. There were some hipster types wearing vintage Metallica T-shirts à la Ritchie Camden, and there were some teenagers wearing Metallica T-shirts à la Hot Topic. Mostly, though, I saw film buffs, and I wondered how many of them, like me, hadn’t touched a Metallica record since . . . well, since never.

We can thank filmmakers Joe Berlinger and Bruce Sinofsky for bringing all of this together. The team–who were behind the documentaries Brother’s Keeper and Paradise Lost–began filming Metallica in 2001 as the band embarked upon recording a new album at a makeshift studio in San Francisco’s Presidio. Two years, one bassist, countless hours of therapy and many epic arguments later, Metallica release St. Anger. With the band’s blessing, Berlinger and Sinofsky caught it all on tape. Some Kind of Monster is the engrossing result, and it offers both music fans and pop-culture buffs a rare chance to witness mega-musicians being all too human.

There are two basic types of rock documentaries: those that, with help from stock footage and talking heads, look back at a band’s legacy (The Compleat Beatles, for instance); and those that look forward with a band from a crisis at present to a daunting future (Gimme Shelter.) The former can be informative, but it won’t offer the voyeuristic thrills of the latter, where the filmmakers put us smack-dab in the middle of everything to watch the sparks fly.

Some Kind of Monster is particularly fascinating because it is Metallica, and bands don’t get much bigger than them–these guys have sold over 90 million albums worldwide. Man, that’s nuts. What does selling 90 million albums do to a person? Makes them impossible to work with, apparently. As the film opens, bassist Jason Newsted quits the band after 15 years, citing a lack of creative input.

And then there were three: frontman James Hetfield, guitarist Kirk Hammett and drummer Lars Ulrich. Longtime producer Bob Rock fills in on bass during the recording sessions, which are far from harmonious. Hetfield and Ulrich are at each other’s throats, so to keep the band from killing each other, management brings in a therapist.

Here’s where it starts to get good. In other rock documentaries, you have squabbles and breakdowns and temper tantrums–as there are indeed here–but in Some Kind of Monster, we also witness Metallica hashing it out with therapist Phil Towle, talking about how they feel and drawing up a Metallica mission statement. Back in 1982, if Metallica had a mission statement, it was probably to get fucked up and rock. Ninety million albums sold changes a lot.

Tensions mount until Hetfield storms out of the studio and checks himself into rehab, practically cutting off communication with the rest of the band for a year. In the meantime, therapy sessions continue and Ulrich undertakes his crusade against Napster, which turns into a PR kiss of death.

In the midst of all this seemingly rock-star behavior, we somehow get a sense of Metallica as real people who just happen to have way more money than we do: Hetfield picks his daughter up from ballet class; Hammett reads Fortune magazine during studio downtime and surfs to unwind; Ulrich’s father (who comes off as sort of a Danish yogi) visits and puts his son on edge.

The movie is surprisingly hilarious, thanks in great part to Metallica’s reactions to the touchy-feely earnestness of therapist Towle, and most of the time, we laugh with Metallica and not at them. Berlinger and Sinofsky pull off that great documentary trick: even though we truly have no idea who these people are, we feel like we do, and we end up hanging out with these Metallica dudes instead of sitting in some movie theater like schmucks.

We know how the movie ends, because we know that Metallica does not break up and that, eventually, they do complete and release the album that becomes St. Anger. Still, there’s this tragic air to everything in the film–the arguments, the songwriting, the therapy–because we also know that there’s no going back for Metallica. They can never play music strictly for fun again, because they’ve been through too much, and bringing it back is a matter of more than simply re-revisiting garage days.

But nor can they just quit, because then what would they do? Retire, be super-rich and do nothing? There’s a scene where Hammett and Ulrich go to a sold-out Bimbo’s show in San Francisco to see Echobrain, Jason Newsted’s new band. There they are, with their lead singer in rehab and recording at a standstill, shelling out tens of thousands of dollars a month for a band therapist, and Echobrain is the toast of the town. Art is hard.

Documentaries like this are crack for music fans, especially nonmusical ones such as myself. Watching a song come together in the studio, you get a little rush from the spike of creativity–which is funny, because if you’ve ever been around a band while they are recording in real time, it’s the most boring thing in the world. Thanks to the miracle of editing, we can get a sense of the boring stretches without suffering through them, and in the end come out feeling like we, as viewers, played a small role in Metallica emerging from their midband crisis.

Which proves that there’s no such thing as an archetypical Metallica fan, and that’s why there were no Ritchie Camdens at the theater the other night. They have, like Metallica, all grown up.

‘Metallica: Some Kind of Monster’ is playing at theaters throughout the Bay Area.