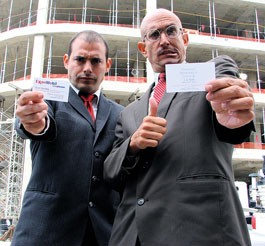 The Yes Men save SSU students, at least

When it comes to a burnable fuel, what’s more plentiful than whale blubber? Human blubber, of course. Introducing vivoleum, the fuel of the future—not to mention the past—that finds a solution to global warming and our burgeoning energy crisis through a nice calorie-rich diet. Meet Reggie. Reggie, an Exxon-Mobil employee who’s been exposed to too many toxins, is, in his own words, “going to die anyway.” So why shouldn’t he help those left behind? He’s glad to! Interviewed after singing a few refrains of “You Light Up My Life,” Reggie says that he would like to be the candle burning on a cafe table when lovers first meet. Transformed into vivoleum, Reggie can do just that. He’s glad to be of service.

Some 500 lunchtime attendees of a Canadian energy conference learned more than they wanted to about vivoleum and Reggie in 2008, watching a tribute video to the vanquished janitor as they unwittingly held lighted candles shaped in his image. The lunchers also detected a foul smell. While hair had been placed in the candles to give them a noxious odor, those unfamiliar might be forgiven for thinking it to be the posthumous scent of Reggie himself. The Yes Men had pulled another prank.

The Yes Men, Andy Bichlbaum and Mike Bonanno, regularly pose as corporate hacks to soberly apologize for such corporate wrongs as the Bhopal disaster or to amend the U.S. Chamber of Commerce’s stand on climate change or to end the Iraq War on behalf of the U.S. government. Masters of the bland, the Yes Men recently unveiled their latest Exxon-Mobil initiative, a CEO survival suit that allows the richest guys in the room to travel freely through an apocalyptic disaster, safely encased in inflatables.

What’s most shocking about the Yes Men’s pranks are not the stunts themselves, but the mild acceptance with which their regularly outrageous statements and actions are accepted by both the press and corporate citizens. Bichlbaum and Bonanno travel to SSU to spread the word about not simply accepting the outrageous behavior of others on Wednesday, April 28, at the Warren Auditorium, 1801 E. Cotati Ave., Rohnert Park. 7:30pm. $10; free, students and faculty. 707.664.2382.