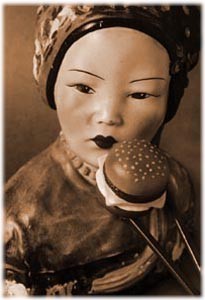 There’s room at the table for everyone

MY SISTER Monika is one of the millions of Americans who think “gourmet” is an insult. She can’t help it. She married a good Mormon boy from Idaho, where “meat and potatoes” is the unofficial state motto.

Anyway, she’s been flinging the G-word at my brother Marty with serious intent to scorn, and why? Because he married a good Mormon girl from Japan, and learned to make a killer sukiyaki. Of course, sukiyaki isn’t gourmet to Marty and his family, anymore than the miso soup that they sometimes have for breakfast, but there’s something that Monika, along with the rest of middle America, finds threatening about it.

She should have seen it coming at a Sunday dinner 15 years ago, when he proudly presented a new salad dressing, made primarily of soy sauce and orange juice. And in the later context of a college degree in Japanese and a church mission to Japan, Marty’s earlier attempts at fusion cuisine made perfect sense.

Now two of my three other brothers have followed suit–with both the missions and the wives, talk about sibling rivalry!–which means that my parents have more Japanese in-laws than they do Anglo ones.

It’s kind of cool, actually. Our family gatherings have developed a certain Pacific Rim-meets-Betty Crocker flavor. If you count my father and his Dutch eccentricities, we have become a tricultural family, with menus to match. We are as likely to have cooked salmon sushi, set and stirred with lemon zest in a bamboo basket, as we are to have deli sandwiches or some stick-to-the-ribs Dutch pea soup.

In this we are yet another family that finds itself dipping its toes into America’s melting pot. History shows that immigrants to these United States hold on to their home cultures’ foodways long after everything else has faded, even while picking up other traditions when convenient or necessary.

For example, my dad immigrated from the Netherlands when he was a teenager; one of the first jobs he took in the New World was as a line cook in Las Vegas, frying up the foods of his new homeland for tables full of compulsive gamblers. But somehow he held on to the food of his youth. We children never picked up a word of Dutch, except for a few of the choicer swear words, and of the culture we only knew Delft-blue tile paintings of windmills and girls in flappy hats.

But the food, sent over in CARE packages from our aunts in the Netherlands or picked up on rare occasions from a Dutch store near the city, remained a vivid part of our childhood table: good cheese, strange cookies, pickled herring, salt licorice.

My brothers’ children are getting an equally vivid spread, with miso soup and Campbell’s soup duking it out for primacy. Even their linguistic fate is up in the air: for now they’re bilingual–their toddler conversations are a lively blend of Japanese baby talk and the occasional random English utterance–but the oldest nephew, not even 6 years old, is already losing his interest in his mother’s native tongue. Marty tells me of fourth- or fifth-generation Japanese Americans in the central Californian town where he lives who know exactly the names of dishes they need to make for a holiday, but they can’t read the packages at the Asian food store.

I can’t tell how he feels about this fate for his own children, but it seems to be what they’re headed for.

THERE ARE OTHER casualties of the meeting of various generations and cultures in our family. Marty is losing the Dutch New Year tradition of sweet fritters in favor of the complex Japanese preparation of packed meals for the week following New Year’s Day. And even I, the open-minded wine country gourmet, flinched at my first encounter with okonomiyaki (pancakes with meat and vegetables). It would have gone better if the traditional topping of bonito flakes hadn’t seemed quite so animated as they fluttered in the hot air of the grill.

But some interesting juxtapositions have also emerged. For example, the high incidence of lactose intolerance among people of Japanese descent has not deterred Marty’s wife, Nanae, from competing with our dad for the title of maker of the best hot chocolate. The two have heated conversations about whether to buy ground or powdered, whether or not to stir the chocolate with the milk all at once or temper it bit by bit. The two agree on one thing only: Dröste–a Dutch brand.

After that, it’s all up to the inevitable taste test.

For the most part, though, the merger is going smoothly. I remember a day last winter when we made o-nigiri, or rice balls, and decorated them with seaweed. My newest sister-in-law, Yuko, shyly instructed me in sprinkling salt on my moistened palms and patting a ball of rice into the traditional form. My results were lumpy and too tightly pressed, compared to Yuko’s clean elegant triangles, and the seams stuck out in sharp corners where my palms didn’t quite meet, because I picked up too much rice.

But we forged ahead and made a plateful of o-nigiri, wrapping some in nori and sprinkling the others with furikake, a salt/seaweed blend.

Five-year-old Erikun (even my mother uses the Japanized form of his name, Elliott) had been watching the operation intently, even patting his own miniature o-nigiri, with Yuko giving him cute little baby directions in Japanese. But when the cartoon came on in the next room, he could have just as well been rolling a Ho-Ho. Like any kid who wants the TV, he blindly grabbed a piece and was off like a shot.

Frankly, if this is a “gourmet” kid, I don’t think middle America has much to worry about.