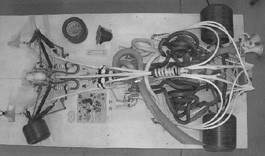 Sculptor Michael Cooper has lived with his wife, Gayle, in their west Sonoma County home for some 26 years, but to hear him tell it, he’s just now arrived in the North Bay. “This is my introduction,” he says modestly. “Walter brought me into the county.”

The “Walter” in this instance is Dr. Walter Byck, owner of Santa Rosa’s Paradise Ridge Winery and the main driving force behind last year’s vastly successful countywide Sculpture Sonoma. Byck says that he just wanted to make friends, so he invited all of his favorite sculptors to participate in the yearlong multi-venue event. That way, he reasoned, he’d get to know them better. Along the way, Byck urged visitors to meet Mike Cooper, visit Mike Cooper, become familiar with Mike Cooper’s work. Byck’s eyes held a certain gleam that those who know the good doctor understand means this advice should be heeded.

Cooper’s second introduction, perhaps, comes on Oct. 28, when he is one of nine artists showing work for auction at the Keller Estate Winery at the Art + Architecture fundraiser for the burgeoning Petaluma Arts Council. The recipient of a $1 million grant from an anonymous donor this June, the council is moving ahead with plans to build a permanent arts center. Having identified the former railroad depot smack downtown as the best location, the council is trying to raise matching funds that will eventually total between $2 million and $4 million, depending on the resulting scope of their project.

Compared by the AMS consulting group hired to guide them to such other worthies as San Rafael’s ArtWorks Downtown space and the Sebastopol Center for the Arts, the proposed Petaluma Art Center would provide exhibition opportunities to area artists as well as classroom time to those interested in learning to create. Currently, it is a newly painted but defunct depot near an unused railroad track across from Long’s Drugs.

Such tumbledown description is a contrast to the serene order that Cooper instills in his work and his life. Trained as a sculptor at San Jose State University and UC Berkeley, Cooper taught art for some 34 years at De Anza College in the South Bay. Fascinated with cars, such Western mythology as Hopalong Cassidy and guns, as well as the functional beauty found in chairs, Cooper mixes his sculptural training with a woodworker’s sensibility and an unremitting sense of the perverse. He uses metal-working tools to cut wood; he weds exquisite quilted maple pieces to aluminum sprayed with auto paint; and he puts toothy spikes into his chairs just where a casual sitter might mistakenly lean to relax.

On a recent sunny morning, his rural oversized studio allows light and grudging warmth in through the open doors. Cooper shows a photograph of a 7-by-8-foot sculpture currently on loan to the Oakland Museum. Whenever, he says, “they kick it out of the museum,” he’ll bring the contraption home. Ostensibly a chair, but so tricked out with engines and widgets that it will literally hop when revved, the piece, called Ride, is one of the only works that Cooper has placed out in the art world.

Which brings us back to his introduction.

While Cooper has lived in Sonoma County for decades, his life has been focused on teaching and family. He’s had little contact with the traditional barbs of the art world and even less with the many artists who populate the North Bay. When Byck found him last year and began beaming that meaningful gleam, Cooper barely knew anyone north of the Golden Gate and had not shown much at all.

“I’ve basically given my stuff away over the years,” he says sheepishly. The visitor looks around the studio. In progress on a massive table is an equally massive wooden sculpture consisting of thousands of pieces, each cunningly co-joined and made of different woods–many of them wooden strips ingeniously fitted together by Cooper to reveal clever interior designs when carved–that form the engine and chassis of an elaborate vehicle. “A car person will be able to figure out everything on this,” he chuckles, rubbing a piece thoughtfully.

Elsewhere in the studio sits GMO, a hybrid chair that has a seat and a back and two arms, but whose manifestation as a possible piece of furniture ends there. Cooper has created “horns” of sorts with aluminum and given the sculpture the appearance of kinesis by adding soft rounded metal forms like wheels whose shape repeat themselves as ball-bearing-type forms elsewhere on the piece. Generally eschewing ready-mades, Cooper even creates such details as wooden gear linkage when making a carlike sculpture. Across the room, another piece uses pneumatic pressure to raise an oversized gun that, when fully extended, protects an oil derrick on a platform. “It’s obscure,” Cooper chuckles. “It’s exactly the kind of piece you can never sell.”

Selling, of course, has its pleasures, particularly when it’s for a good cause. In organizing the Petaluma Arts Council fundraiser that will see Cooper’s massive wooden car chassis on auction, stone sculptor Edwin Hamilton curated the work of seven other colleagues whom he particularly esteems.

Designed by renowned Mexican architect Ricardo Legorreta, Keller is currently only open to the public by appointment, though plans to have a regular tasting schedule are in the works for next year. Specializing in Pinot Noir and Chardonnay, the Keller family made their fortune in automobiles and live mostly in Mexico. Walking through the chilly wine caves with Keller staffer Sandy Maus, Hamilton says that the proposed Petaluma Arts Center is “one of the best community-minded projects I know of.”

Pausing in the winery’s handsome tasting room, looking through French doors out into a courtyard that will allow Art + Architecture revelers to spill out among the evening’s special sculpture, Maus sighs. “Art,” she says directly, “is what makes us civilized.”

Which is why, of course, we’re so eager to make the introduction.

The Art + Architecture fundraiser for the Petaluma Art Center is slated for Saturday, Oct. 28, from 5pm to 8pm. Keller Estate Winery, 5875 Lakeville Hwy., Petaluma. $125; includes shuttle to the winery, live entertainment, food, wine and many surprises. 707.766.5200.