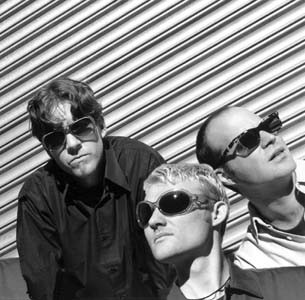 Medeski, Martin, & Wood play jazz you can dance to

IF WE GET a basic feel for something,” says Billy Martin, drummer for the funky jazz trio Medeski, Martin, & Wood, “we start to work on a bit of form and shaping it. That can happen in the studio or over a few months on the road. It’s always evolving.

That has been apparent from the beginning, as their debut recording, 1992’s Notes from the Underground, served notice that Medeski, Martin, & Wood were ready to include in the group’s musical mix most anything they ever had heard. Elements of funk, hip-hop, blues, avant garde, and rock all melded into an intensely rhythmic stew that immediately won critical attention.

More recently, the band has shown a willingness to go anywhere–even if it means stepping out of the spotlight–to explore those musical interests. After seven years together–during which they have recorded five highly regarded albums (as well as the funky Get Shorty film score), played uncounted club and concert dates, and reaped a trunk full of glowing reviews–Martin, keyboardist John Medeski, and bassist Chris Wood found themselves in an unfamiliar role last fall.

The acclaimed trio sat in as the hand-picked sidemen for celebrated jazz guitarist John Scofield on his recently released A Go-Go (Blue Note).

“John called us up and asked us to play on his next record,” Martin relates, “and we thought it would be a good idea.”

The shift into supporting roles on another artist’s songs and arrangements “wasn’t awkward, it was quite natural, just like getting together with any musician and making music,” he adds. “We were there, trying to help him express his music in our way. It was really just a matter of playing together, rehearsing a little bit, and putting it on tape.”

And that has not changed. In fact, Martin says, he is as open as ever to further outside collaborations. “Anybody who has an interesting story to tell, I would be more than happy to work with them.”

It was that same openness that brought the trio together in the first place. All three were active in the New York-to-New England jazz circuit, and they knew one another by reputation first. “I had heard about John and Chris, they’d heard about me, and we eventually crossed paths and decided to hang out and play,” Martin recalls. “We played and it felt logical, like everything was possible. And we got along as friends, so it was an instant hookup.”

And while he is unquestionably the keeper of the beat, Martin insists the creation of the groove is not just his contribution.

“The drummer is always expected to be able to play a good dance beat, which I’m always striving for,” he says, “but the rhythm comes from John and Chris, too.”

So it’s scarcely surprising to hear Martin tick off a list of influences that begins with master jazz drummers like Roy Haynes, Max Roach, and Elvin Jones, but quickly branches out to include Zigaboo Modeliste of the Meters, as well as 20th-century American composers Charles Ives and John Cage. “All that stuff has an influence,” he says. “I hear rhythms and textures and melodies in everything.”

“We spent more time in the studio, using the studio like an instrument to help bring the music to another level,” Martin says. “We experimented a lot more, improvised a lot more. “

As for the new material, “A lot of it is spontaneous compositions,” he explains.

One way the group has stretched its stylistic boundaries is by recording the same set of compositions with two engineers of distinctly differing philosophies. “One had more of a hip-hop approach and the other had more of a chamber music approach,” Martin recalls, contrasting those approaches as “capturing the magic of the moment,” compared with “getting an almost crystal-clear natural sound.”

Somewhat surprisingly, “they ended up sounding pretty cohesive,” he laughs.