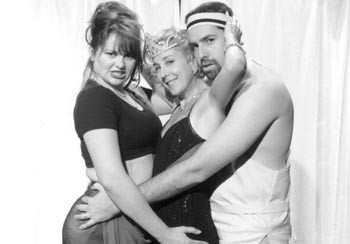 BRAVISSIMO! The Actors’ Theatre production of Medea, the Musical gets in everything but the, er, kitsch-en sink. This Technicolor cabaret extravaganza, skillfully sutured from a talented sexy cast and playwright-director John Fisher’s hilariously campy script, will make you laugh so hard your face will ache and your seat will be wet (if only because water occasionally splashes from the onstage antics into the audience).

Set at a fictional “Euripides Festival” where a production of Medea is under way, Fisher’s musical is a bawdy, raucous burlesque of the original boy-meets-girl, boy-pisses-girl-off, girl-commits-infanticide story. This Medea successfully braids the threads of Greek mythology, popular culture, and gay camp into an NC-17 comic cat-o’-nine-tails, and then proceeds to whip your butt silly.

Actors’ Theater powerhouse Argo Thompson leads the cast through a cavalcade of backstage shenanigans portraying none other than “Argo”–a gay lampoon of himself struggling to play “Jason,” captain to (prepare for extreme synchronicity) “The Argonauts.” Convolutions abound as the actors portray versions of themselves as actors attempting to portray “characters” in this play within a play.

Also complicating matters are the intrusions of the metaplay’s auteur (played with wonderful panache by Robert Pickett) and his attempts to stage the tragedy as a homoerotic fantasia zealously touting gay empowerment. This does not bode well for the unlikely romantic pairing of Argo and Sheila (a superb Sheila Groves as “herself” playing Medea), who each conspire to bend the show to their own sociopolitical objectives.

Comic turns also come when Tim Earls’ pager goes on, Frankie Travis goes down, and Jason Breaw goes off as Aetees, queenly King of Colchis. CoCo Tanner Boylan’s steamy Phaedra, Queen of Athens (who lusts after her son, Hippolytus, played to the homo-hilt by David Costner), adds an extra sensual oomph to the show.

This is a stellar cast that sparkles under Fisher’s crisp direction and surely benefits from his obvious intimacy with the award-winning work (after the stopover at Actors’ Theatre, Fisher and his Medea head for Broadway–seriously).

Droll actor-pianist and musical director Lyle Fisher and percussionist Petra Sperling-Nordqvist escort the players through a spate of song-and-dance numbers culled from the far reaches of popular culture.

Medea, the Musical is a madcap, zippity-Dada, calisthenic marvel. With material of this caliber, it would seem impossible to do it wrong, but AT does it so right that it’s marvelous. Even the gods must be grinning.