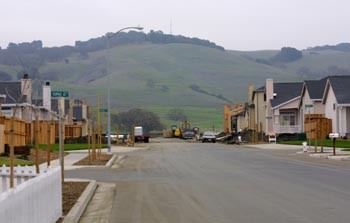 What went wrong with Measure I?

THE REFLECTION has begun. The weeks since the electoral defeat of the Rural Heritage Initiative–which would have put the brakes on sprawl for 30 years in an attempt to protect dwindling Sonoma County farmland–has been a time of many conversations within the local environmental community focused on why Measure I failed by a 57-to-43 percent vote. A lot of folks are asking: What went wrong and were do we go from here? Those discussions culminated last week at a public meeting that drew 100 people to New College of California in Santa Rosa.

The Sierra Club, Greenbelt Alliance, and Sonoma County Conservation Action led environmentalists in support of the anti-sprawl Measure I, which split the agricultural community. The Sonoma County Farm Bureau led an aggressive opposition campaign, which outspent supporters by a wide margin. The majority of the No on I funds came from the corporate wine industry and developers. Kendall-Jackson winery and its subsidiaries reportedly contributed over $40,000, though company officials and their representatives could not confirm the exact amounts and final figures will not be available until Jan. 31.

At a recent meeting of farmers, I heard the following comments that underscore the rift that grew within the farm community:

“The organizers alienated their natural allies.”

“The idea of preserving farmlands is good, but the method was poor.”

“The next RHI needs to include carrots as well as sticks.”

“The campaign was ugly on both sides–many blatant untruths.”

“This is not a time for celebration for anyone. Terrible damage has been done to the county.”

“Measure I was too complicated, too ambitious.”

“The RHI folks lumped all farmers together and treated us as enemies, polarizing us, rather than distinguishing between corporate ag and small family farms.”

A local lawyer added, “Two fatal mistakes were made by attorneys drafting the measure–the provisions that required a vote of the people to allow any new parks in the area covered by the measure, and a farmer to let a son or daughter build a house on the family farm. The opposition was skillful in playing up those two issues.”

“I was not inspired by the RHI,” said Beth Meredith of Petaluma. “I supported it out of loyalty. But it never caught fire or touched our hearts. It needed a shared vision that could build a coalition.”

David Katz, head of Sonoma Land Trust, added, “Landowners–both farmers and nonfarmers–were angry at being left out of the conversation.”

For those RHI supporters who gathered at the meeting last week, even some of RHI’s most ardent backers realize that the ballot measure was flawed. And that they’ll have to try harder next time.

Urban designer Laura Hall, who was active in the early stages of the RHI, believes that it was “too narrowly focused. Diversity is our friend.” Hall now advocates “diverse alliances, not compromises. This means an alliance of perhaps the following: economic justice groups, social justice groups, and environmental/sustainability groups.”

AS CRITICS contended, the RHI did not rise from the grassroots, but from a small group of sprawl-busting advocates, and that was a big part of the problem. As a result, it never managed to inspire enough support at the polls. It was drafted by a few environmentalists who failed to build a significant coalition with agriculture, other activists, and areas like the south county. The Farm Bureau deceptively argued that a no vote would “Save Our Farms” and “Save our Parks”–a simplistic pitch that resonated with voters. In addition, many pro-Measure I signs were stolen by opponents and replaced by misleading placards, making it difficult to get the pro-RHI word out.

Still, Measure I activists point to RHI’s accomplishments. The Farm Bureau has historically opposed parks in farmlands, but favored them during the No on I drive. Environmental pioneer Bill Kortum of Petaluma feels that the RHI campaign helped educate people about the importance of Sonoma’s County General Plan, which will soon come up for revision. The most successful phase of the RHI effort was the petition drive, during which over 23,000 signatures were collected to put the initiative on the ballot. But this positive momentum did not carry into the actual campaign and a clear message failed to emerge.

The Sierra Club’s Peter Ashcroft, who chaired the campaign, says the RHI lost because “mainstream voters had a vague concern that somehow Measure I would be bad for farmers, would hurt parks, or would encourage sprawl. Measure I was too easy to attack with too many targets. This established misgivings in voters. Confused voters said no.”

Mike Reilly, the only member of the Sonoma County Board of Supervisors to support Measure I, concurs. “The other side captured the middle,” he says. “Too many ornaments were hung on the RHI–like restrictions on parks. There was no smoking gun to point to–no objectionable land-use project. We tried to sell too complex a planning notion.”

THE RHI’S fatal flaw, according to most people, was to try to rush through a measure that did not have adequate input from various stakeholders, especially the ag community that it would most effect. Healdsburg grower Terry Harrison points to “the relatively closed process, more like what one would expect of a developer than public-interest groups.”

But at least one local wine grower is much more blunt in his assessment. “The RHI lost because of vigorous opposition from the farm community,” says George Davis of Porter Creek Winery. “Farmers saw, once again, the specter of environmentalists and urbanites ‘cramming’ more regulations down their throat, limiting them, and stifling them rather than protecting their way of life, which ironically, the RHI claimed it was about.”

Yet RHI leader Tom Cruckshank disagrees. “We have to educate farmers about what private property rights mean,” he says.

At the New College meeting, that kind of thinking drew sharp criticism from within the RHI ranks. “It is arrogant to say we [environmentalists] need to educate farmers,” Mark Newhouser noted.

Sonoma farmer Norman Gilroy described attending an RHI event to which friends arrived with an open mind, listened, and decided to vote against the RHI “because of the personal attacks. Some of my best friends are on both sides. They agree on supporting farmlands and protecting rural culture, but they disagree on how.”

As to where to go from here, grower Harrison says, “If the environmental community is looking to farming to preserve open space, they need to learn more about farming and the severe problems that farmers face.”

Scott Mathieson of Laguna Farms in Sebastopol says, “We need to do it in a way that can win, perhaps getting the rural residential areas covered. We need to do something that does not divide the community. If people feel that the farm community is behind it, they will vote for it.”

“Fragile bridges of trust between farmers and conservationists were broken by the RHI,” adds Gilroy. “Many took years to build. Individuals were vilified; long-established relationships have been threatened. It reminds me of the Danube River in Yugoslavia; bridges need to be rebuilt after this war. We need peacemakers.”

According to Supervisor Reilly, “The problem was as much the process as the product. We need to leave it alone for a while, since things are so raw now. We need to rebuild relationships around an issue we can agree on, like renewing the Open Space District.”

But expect a renewed RHI drive in the future. RHI leaders concluded the New College gathering last week by making a commitment to be more inclusive in the future. “We need to slow down and involve others before going any further,” Daniel Solnit of Sebastopol observed.

Meanwhile, Ashcroft’s view of the future is a positive one: “We started something here and need to build on it. We need to work methodically on the next steps. We have a lot of work to do. My hope is that the environmental community can build on the RHI campaign to produce something that we all can get behind and actively support.”

Shepherd Bliss owns a small organic farm and has written in the past about agriculture for the ‘Bohemian.’ He can be reached at [email protected].