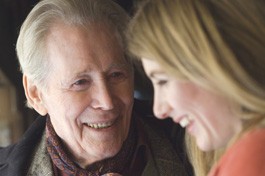 When I reviewed director Roger Michell’s 2004 film The Mother, I mentioned Anne Reid’s lead performance as something every woman over 40 ought to see. Looking at Venus–again, a collaboration between writer Hanif Kureishi and director Michell–it seems to be another case of a film in which the main performance is the most important thing. It is every man over 60, this time, who should turn out for Venus, to see and be captivated by Peter O’Toole’s sunset performance as an old rogue of an actor with one last fling left in him.

O’Toole’s Maurice is still working, sometimes playing a moribund granddad in a hospital bed, sometimes weaving through a cafe where he meets his cronies. He wheezes a dust-dry laugh, a laugh he needs since he’s been rendered impotent from a prostatectomy. In essence, all that’s left is the eyes and the voice.

His chum Ian (Leslie Phillips) is bedeviled by a grandniece, Jessie (Jodie Whittaker), from the provinces who has come to stay with him. Jessie is a scornful and troublesome girl who has no taste for living with an old man. Ian, who is quite fancy, believed he would be able to beckon Jessie with a little bell. Desperate for some help with the ungrateful girl, Ian asks for Maurice’s help. Maurice falls for Jessie, delighted by her sullenness, and tries to infect her with a little culture while marveling at her prettiness.

As a team, Michell tenderizes Kureishi’s shrewder instincts for greater commercial appeal. O’Toole makes sure the film doesn’t turn too courtly, too Cyrano de Bergerac (he tells Jessie outright he’d like a look at her genitals). When he all but buys her affection with jewelry or money for a tattoo, he can jest about it: “No pockets in a shroud.” But we also sense an undercurrent here of one side having a little power and the other having none–good reason for this Venus’ scorn.

The romance has a sharp, demanding side. Feeling sorry for Maurice’s ruined old age, you sympathize with the half-bright girl who has enough principles to keep from becoming a prostitute. But she is out for herself, as well as out for a good time; maybe it is mutual decadence that links the old goat and the young kid. Take, for example, a morning scene, where all we see of Jessie is one plump, pink, bare shoulder and a mound of blankets surrounding by a half-dozen empty beer cans.

Richard Griffiths delivers a comic turn as Maurice’s chum, and there is a moment of keen sorrow when Vanessa Redgrave turns up playing Maurice’s decayed ex-wife, who loves him but can never quite forgive him for what he did to her when they were married. Director Michell is highly televisionistic, and often soppy, as in a scene of Maurice wandering around in a fugue state at some outdoor theater closed for the winter. The story softens up, too, which wasn’t the case in Kureishi’s early days. Maurice denounces “the disgusting happiness and hope” that the young represent, but these two disgusting qualities arrive at the end of the film. It makes for a too-sweet finale for what is almost a captivating May-December, look-but-don’t-touch romance.