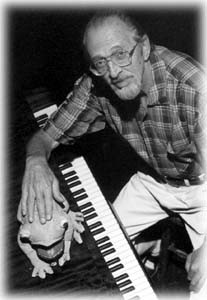 PERHAPS the operatic art form seems rarefied and blue-veined, practiced solely by European-trained artistes who are gently fed like queen bees from birth on spun-sugared sweets and high notes. But baritone Marvin Klebe trained his voice in the farmlands of Crosby, N.D. And he was simply trying to out-sing the din of his tractor.

“I had a loud voice,” chuckles Klebe, 62, the founder of Petaluma’s Cinnabar Theater and the progenitor of its innovative Summer Music Festival, which continues in its 10th year through the end of August. Brought up in a rural town in the glorious pre-TV days of yore, Klebe, his family, and schoolmates were used to fending for themselves for entertainment. In fact, they were used to being the entertainment. And then, of course, there was the Texaco Radio Hour, which beamed the high, clear voices of the world’s best opera stars into Klebe’s living room, giving the little boy big ideas.

Fortunate to have a music teacher in school who was classically trained, Klebe learned to sing German art songs as a boy soprano. “And then,” he smiles, sitting in the darkened morning light of the Cinnabar’s renovated barn-like interior, “my voice went vroooooom, down into the basement.”

Waiting a suitable number of years for the crackle in his throat to subside, Klebe emerged from adolescence with the kind of deep, rumbling timbre that reaches the rafters and the back of the house. And, indeed, he did train in Europe, though Klebe, a tall, rangy man with an easy smile and easy ways, hardly reminds one of a queen bee.

While singing in 1970 for the Western Opera Theatre, the touring arm of the San Francisco Opera, Klebe shocked the audience by announcing from the outdoor Stern Grove stage that he was kaput with traditional opera. He, his wife, and their four sons moved to Petaluma (“I was the hippie on the hill,” he says). He bought and renovated the old Cinnabar school for a song–at $26,500, it was a song most of us would choke to sing–and set up the cabinetry shop that helps support the theater today.

“That’s my day job; there’s no money in theater,” he says. “President Reagan always said that instead of expecting the government to take care of things, you should take your money and put it into charities. Well, OK, then this becomes a charity,” he waves his hand around the bare stage. “My wife’s a teacher, and her money’s kept us in food and clothes. I make my money, and it goes into the charity. That’s deductible, right?” he chuckles.

While proficient in the limelight side of the stage, Klebe had very little idea of how to muster the works from the desk side of things. Corralling friends from all walks of the arts, some of whom–like members of the Oakland Symphony–were denied service in some Petaluma bars because of their wild look, Klebe “sucked their brains” for input, determined to put on modern operas that would challenge and delight.

It’s safe to say that the Cinnabar experiment, afloat for some 25 years, has been successful. Extremely successful is the Summer Music Festival, which brings chamber music, world beat, children’s programming, and an eclectic assortment of other to the Cinnabar, to the Polly Klaas Performing Arts Center, and to local Victorian homes for three weeks of ear-indulgence.

Klebe laughs heartily when asked which is the big moneymaker for the festival. Breaking even is his highest hope, dependent as he is upon yearly money from the city of Petaluma hotel tax fund for the necessary advertising.

“Two years ago,” he says, “I had the Arlekin Russian String Quartet,” a group playing this year on Aug. 21. “I had to get on the phone to get people to come here, because I had sold only 30 tickets. People heard this group and there was this tremendous word of mouth. So, last year, I had 130 people plus.

“But you don’t have babies to make money, and you don’t have art to make money,” he says, crossing his legs. “It’s a quality of life. That’s what it’s about; what makes us different from the animals. We’re not just foraging all the time for food. And to me, that’s what money really is: an exchange of services. Some of it we use to eat, and if we have excess we make art. And art is an excess.”

The Petaluma Summer Music Festival continues through Aug. 23 with events of all stripes, including The Jumping Frog of Calaveras County. Call 763-8920.