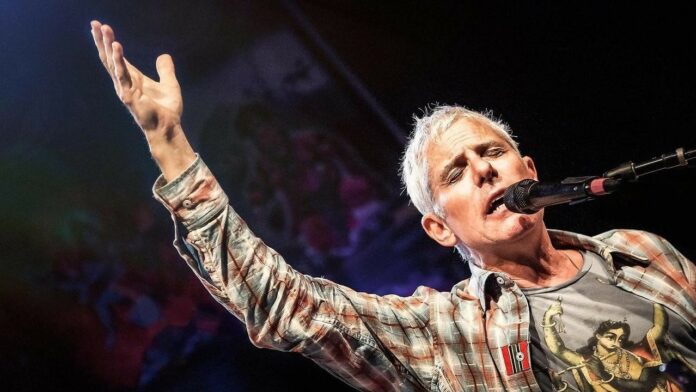 Uttal’s 2020 musical output includes his ambient instrumental album, Gauri’s Lullaby, released this past May. This summer, Uttal unveiled a new single, “Behind the Walls,” that addresses the ongoing Covid-19 outbreak at San Quentin State Prison, where Uttal has worked with inmates as part of an interfaith program. Now, Uttal is releasing another new single, “Time and Again,” the first single release from his next album, Songs of the Mystics, which will be out next year.

“Time and Again” was composed by Uttal and his wife Nubia Teixeira, based on a song of the 16th-century Indian Bhakti poetess, Mirabai. On his website, Uttal explains that the details of Mirabai’s life are “intertwined with legends, miracles and mystery.” Her journey began as a princess of a wealthy Rajasthani Kingdom, though she left the palace and wandered through India as a holy person, writing hundreds of songs along the way. Today, Mirabai is revered throughout India as a folk hero and a Bhakti saint.

Uttal’s upcoming Songs of the Mystics album will include re-imaginings of songs and poems by many of the Bhakti saints, and Uttal was compelled to release this single first.

“I decided to release this song now because it seems that at this moment in history, more than ever, we are being called upon to act as well as to pray, each in our own way, that spirit will come and lift the mountain of chaos and division and divisiveness and pain from the world so that we can all breathe and our hearts can freely love once again,” Uttal says in a statement.

Uttal’s entire recording process has changed during the Covid-19 pandemic, though he has adapted to social distancing to make his music and this recording uses musical elements from various sources.

“The lovely background voices by the Pagan Love Choir were from a live concert I did of this song in February, which was multi-tracked. The accordion was recorded two years ago over a guitar demo I had at the time of the song. The rest of it was produced in Ben Leinbach‘s little studio that is now divided by huge plexiglass walls. Awkward, but we got the job done. I couldn’t let the pandemic squash creativity. Creativity is medicine,” Uttal says.

In addition to Covid-19, Uttal has musically adapted in the face of recent wildfires in West Marin and throughout the North Bay.

“2020 has, indeed, been a year full of challenges, but it has also been a year of deep healing, personal growth and more intimate family interaction,” Uttal says. “It’s also been a time of deep connecting with my extended family and greater Bhakti community. I’ve been doing weekly live stream concerts and Kirtans, that have been a great point of focus for myself in terms of preparing and creating new songs and practicing my older songs, as well as bringing our extended Bhakti family and community together over Zoom.”

Uttal’s next Zoom concert is an online Kirtan concert on Friday, Oct. 23 at 4pm.

“These ancient chants contain a transformative power and healing energy,” Uttal says of Kirtan. “By singing these prayers we join a stream of consciousness and devotion that has been flowing for centuries.”

Listen to “Time and Again” and register for Uttal’s online concerts at Jaiuttal.com.