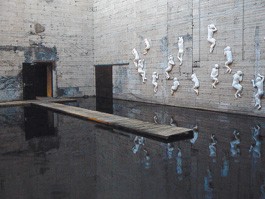 Katherine Zsolt unpacks gruesome tales, one medium at a time, for ArtsSonoma

A queen on her deathbed forbids her king to marry again unless he can find a new wife as beautiful as she. The king, moved by grief over his wife’s death, does not even think to remarry for several years. And then one day, he looks at his daughter and realizes that she is the only woman who could possibly replace her mother.

The princess, horrified by his proposal, stalls for time by asking him for three dresses before they marry: one as golden as the sun, one as silvery as the moon and one as bright as the stars. She also requests a mantle made of fur from every animal of the forest. When her father eventually produces all four items, she flees his kingdom and marries another king.

Does she lives happily ever after? Hardly. Stories like this one, a German fairy tale titled “Allerleirauh,” were once widely shared with young children. Starkly different from the watered-down fables that kids today watch, these stories and their gruesome undertones provoked the imagination, creating images that have lasted for years in the memories of people like sculptor Katherine Zsolt.

“The most important thing about these weird fairy tales is that they leave you with some unconscious imagery that you can’t digest, that sits way back, and your unconscious chews on it, for a lifetime,” says Zsolt by phone from Phoenix, Ariz. She knows from experience. She encountered “Allerleirauh” 16 years ago in Marion Woodman’s novel Leaving My Father’s House, and hasn’t been able to shake the imagery ever since.

And neither can those who gather to listen to the story. When Zsolt read the tale aloud to Helen Hestenes, owner of the Icehouse, an exhibition venue in Phoenix, Hestenes was moved by how clearly it affected the artist. She encouraged Zsolt to do an exhibition, and Zsolt used the opportunity to make a statement. She reflected first on the princess’ three “dresses of light.”

“The first dress the princess puts on is the masculine dress,” she explains. “It’s about brightness, it’s about intellect. The second dress is moonlight, which is feminine intuition; it’s about darkness. And then the dress of starlight, it’s a light of communion with self or with the universe.” The issues raised in the fairy tale of incest and finding one’s voice compelled Zsolt to engage with the fairy tale as Hestenes suggested.

Housed originally in the Icehouse, Leaving My Father’s House—Zsolt’s three-part, 7,500-square-foot installation is named in honor of Woodman’s text—occupied multiple rooms, including one that opened up to the Arizona sky. The work, which includes over 40 white body casts of children, 10 story panels, a small video installation—complete with a flooded floor—sprawled over the concrete building. Having just made the journey from Phoenix to the North Bay to play a part in the upcoming ArtsSonoma Festival, the piece is creating a narrative all its own.

Zsolt grappled with the paradigm for storytelling that tales like “Allerleirauh” offer. The sand-cast panels, which depict the first half of the fairy tale, are a tribute to traditional methods of storytelling. Zsolt added dimension to the story with the second and third parts of the exhibition, capturing the princess’ flight from her father’s kingdom in an ethereal video installation.

Sharing a room with the video is a cluster of broken body casts and scattered plastic garbage centered around three computer monitors. In its Icehouse location, a capacious, roofless room enclosed the exhibition, with the body casts of children in relaxed, sleeping positions hanging from two of the concrete walls. Glassy black water covering the floor reflected the luminous forms, interrupted only by a plank-wood causeway.

Before Leaving My Father’s House could spin its own story, the artist herself had to face the facts of the world around her. Zsolt is deeply moved by signs of environmental degradation such as the Pacific Gyre, the vortex of plastic garbage caught in the Pacific Ocean. Creating the complex artwork was the only way Zsolt could come to terms with what she observed. The princess in Zsolt’s video installation mimics her reaction to the world: “Unlike the fairy tale, when [the video] ends, she really wakes up, her eyes are opened. And what she sees is what I saw.”

No matter how clearly she envisioned the piece, however, Zsolt never could have foreseen how community would rally around the work and its message. Central to her position on environmental issues is the potential they have to set negative examples for younger generations. From the project’s onset, she planned on casting children’s forms in plaster for the exhibition’s final part, but she never expected the response she received from both the kids and their parents. Her first castee brought photos of the experience to school, and drew 40 more interested youngsters into Zsolt’s piece.

Word about Leaving My Father’s House spread, and Zsolt soon found she had support from a wide array of individuals. The artist had initially reached deeply into her own pocket in order to complete the piece. Zsolt works as a photographer and designer, and initially paid the cost of materials for the large project with income from her other jobs. By the time she completed the work a year and a half after she started it, some 300 other parties had contributed to Leaving My Father’s House, totaling up to $11,000. The response proved overwhelming, a phenomenon Zsolt had never expected. “I realized that although the piece was heartfelt, it became a community,” she says.

The “community” surrounding Zsolt’s multipart piece will dictate its future. Zsolt says she’s made a commitment to the children who volunteered to be cast to let her piece travel. Leaving My Father’s House will be significantly downsized for the ArtsSonoma Festival, during which it will be exhibited in Geyserville’s old post office. Hoping to find other abandoned structures as venues for the work in the future, Zsolt wishes to keep this work as free of commercial interest as possible in order to preserve the art’s verity and ability to reach the general public. Given its size, complexity and dark mythic underpinnings, the work is suitable only for a museum; the ambiguity of its location is only fodder for another story.

Running Aug. 28 through Sept. 12 at venues throughout Sonoma County, the ArtsSonoma Festival is an ambitious salute to all of the many events that North Bay creatives already have under way as well as an innovative effort to introduce new and unusual happenings. The fest kicks off a few days early with a masquerade party on Aug. 26, with food and wine as well as an ARTrail preview, silent auction, raffle, live music and more than a few surprises. Masquerade preview, Thursday, Aug. 26, at 5:30pm. Wells Fargo Center, 50 Mark West Springs Road, Santa Rosa. $150 a person; $250, couple. 707.579.2787.

The fest proper launches with a full day of the arts on Aug. 28, featuring a taste of the event with plenty of food and drink available. Look for the KRSH 95.9-FM to present a musician’s showcase; ARTrails artists to be set up in booths; Cinnabar Theater to present standup comedy; Last Record Store owner and radio jock Doug Jayne to host a young musician’s showcase; and improvisational comedy from the players at Sixth Street Playhouse. The Children’s Museum will pull up their traveling exhibit, the Northern California Native American Alliance will perform and more is emphatically guaranteed. Festival Launch, Saturday, Aug. 28, from 10am to 10pm. Wells Fargo Center, 50 Mark West Springs Road, Santa Rosa. $10. 707.579.2787.

Otherwise, fest activities are typically found off-the-beaten, including photographer Megan Rhodes’ Chainlinked installation. Essentially an art scavenger hunt featuring large photos adhered to chainlink fences at each of Sonoma County’s four corners, Chainlinked‘s individual parts hint at the location of the others. Visitors are urged to photograph themselves with the images and then post them to Facebook or email them to the artist to be entered in a raffle. Also, actor Eliot Fintushel will declaim Walt Whitman’s poetry at various unusual spots, the Carnival of Chaos will rain down some fervor, the Sonoma Summer Circus will juggle a’plenty and there’s just lots and lots and lots of other tomfoolery. For a complete, up-to-date calendar, keep checking www.artssonoma.com, because all of this is a movable feast.

Bohemian.com
Previous articleThe Last Morning at the Rialto
Next articleAug. 25: Lucinda Williams and Chrissie Hynde at the Uptown Theatre