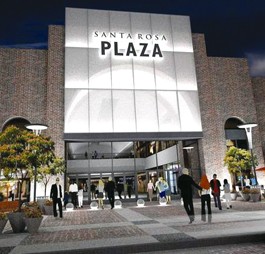 In a grand show of charts and graphs last Thursday, Simon Property Group, the Indianapolis-based company that owns Santa Rosa Plaza, announced the beginning of a 16-month, multimillion dollar interior and exterior renovation of the nearly 33-year-old shopping center.

Slated to begin in construction in late July, the redesign includes renovated restrooms, new lighting, new “soft” seating throughout the mall and a redesigned B street entrance. But those holding out hope for an initially reported “pedestrian walkway” connecting downtown to Railroad Square will have to keep crossing their fingers; those reports denoted a spiffing-up of the current walkway between parking garages on the west side of the mall, and not a walkway between the long-separated town centers.

Kelly Hartsell, regional vice president for Simon Property Group, tells the Bohemian this is only phase one of a multiphase process. “We understand that connectivity is a vital issue,” Hartsell says. “We want to do our part to make that happen, and we see this as a first step.”

Santa Rosa’s vice mayor, Jake Ours, says that complicated ownership issues in the mall (the old Mervyn’s building is owned by someone other than Simon) makes a pedestrian pathway a difficult proposition.

“It’s not what we want as a final design,” Ours says, “but we’re going in the right direction.”

Also in initial reports, an artist’s rendering of the redesign omitted the disjoined sculpted hand that’s become synonymous with the end of B Street. But “we love the hand, and we want to keep the hand,” says Hartsell.