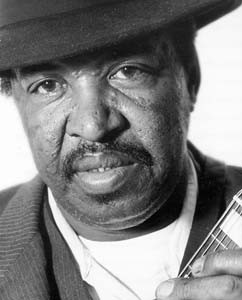 Magic Slim whips up a ‘Black Tornado’ on newest CD

MEATY and somewhere north of six feet, bluesman Magic Slim is a large man. His voice is, if anything, even larger. The native Mississippian is a better-than-average guitarist as well. On 1998’s Black Tornado (Blind Pig), an excellent disc showcasing Magic Slim’s aggressive, take-no-prisoners style, those two attributes are fully evident. After spinning this disc for just a short while, I know why Westside Chicago blues pioneer Magic Sam anointed Morris Holt “Magic Slim.”

The album is ripe with high-voltage Chicago blues power.

Scattered throughout the album are numbers scripted by Magic Slim himself. The title track is a chugging, country-spiked instrumental that sounds more like a train leaving the station than anything else.

Things get off to a pepper-hot start with “Jealous Man,” with Slim shouting out a lyric clearly designed to let his woman (and everybody else) know the ground rules of a relationship–it’s his way or the highway. When he roars, “You can look at my woman, but man, you better not touch,” there is no doubt he means every word.

“I Can’t Trust My Woman” is another exercise in paranoia on which Slim & the Teardrops perform with bone-chilling ferocity. Equally fearsome is Slim’s guitar playing; he is an awe-inspiring technician. More significantly, he uses that facility to extract every conceivable emotion from his instrument. One moment, it’s sharp and brazen; the next it plunges deep into Muddy Waters country with low, menacing bass notes.

“Crazy Woman” is a slow-paced tour de force. Slim’s guitar sets up the all-blue scenario. This track more than any other demonstrates why Magic Slim has attained legendary stature. His guitar moans, whines, and pleads. By the time Slim utters the opening line, the teardrops have already commenced to flow. His lyric is seemingly bereft of all hope.

Nevertheless, Tornado‘s final tune, “Love Like I Wanna” is positively cheeky, shuddering with braggadocio. The song is a declaration of emotional independence. Magic Slim & the Teardrops may sometimes get low-down, but nothing can keep them there.