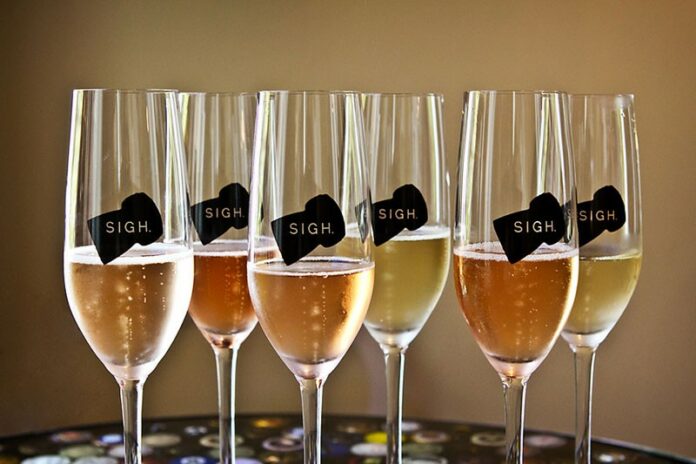 Napoleon’s light cavalry, in the early 1800s, were constantly on the move and had no time to sit around in wine lounges and gently twist the cork off a bottle of Champagne, eliciting the proper “sigh.” Whether celebrating victory or commiserating in defeat, they employed a fast, effective, if dicey-looking method of opening those very necessary bottles of Champagne: sabering.

Two hundred years after the French emperor’s armies were defeated by a plucky coalition of oligarchs, Sigh Sonoma owner Jayme Powers steps into a winetasting-room-choked alley off the Plaza with bottle and saber in hand. Key points in sabering, she says, are a dull saber, a cold bottle and a strike on the seam. Slice, crack, pow! Neat trick.

No reason to fear shards of glass in a pour of crisp and toasty Veuve Fourny and Fils Blanc de Blancs ($62; glass, $16; taste, $6), says Powers—the physics of bottle pressure took care of that.

A job at Schramsberg Vineyards spurred the Sonoma native’s interest in sparkling wine and Champagne. “A lot of people don’t know that Champagne is a region,” says Powers, who offers a bit of education with flights. By popular demand, she started a small wine club. Instead of carrying the big names, she looks for Champagnes from smaller labels and growers that cannot be found in other stores. The spot’s popular with winemakers; large-bowled stemware is kept in reserve for serious aroma sniffers.

Indeed, while the Iron Horse Wedding Cuvée ($38) is as elegant and austere as usual, with ghostly traces of grapefruit and strawberry under a veil of scoury mousse, the star sippers are Champagnes. A whiff of the Michel Forget Ludes Brut Rosé ($64) conjures a vision of strawberry shortcake, which vanishes just as fast on the firm, dry finish. Nine years on the lees has aged the 2002 LeLarge Pugeot ($72) like pungent cheese rind, while the palate is still fresh with fermenting white grapes and rich with toasted almond flavor.

Tuesday evenings during the Valley of the Moon Certified Farmers’ Market on the Plaza, two bottles of cold bubbly “to go” cost just $29—darn near charity. During the week, locals have discovered this is a quiet place to have a business meeting; weekends bring in bachelorettes, honeymooning couples and wine country daytrippers. For the odd guy out who simply can’t abide sipping fizzy wine from a flute, an hour spent lounging on cushioned benches and gold-tasseled pillows needn’t be his Waterloo. Sigh Sonoma’s “42” license allows them to serve Miller High Life, the “Champagne of Beers.”