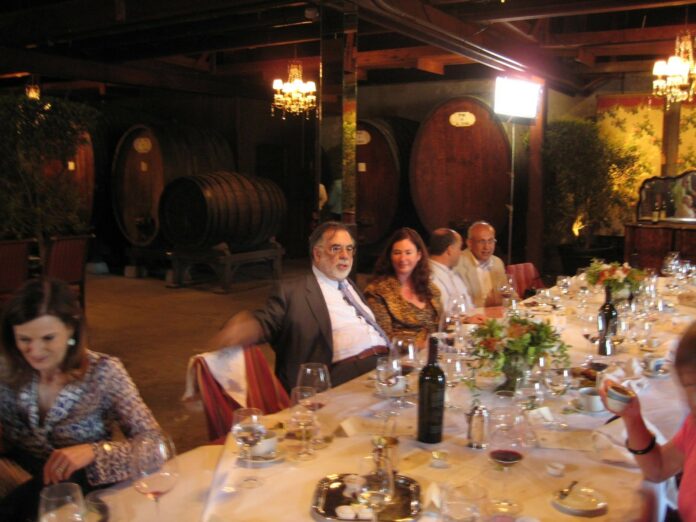 Lunch With Francis: Coppola, Rubicon and the ‘Foie Gras Wars’

Sometimes I actually do have the life I’m supposed to have, and last Friday, March 27, contained a slice of that supposed pleasure. The occasion was twofold: The launch of Chicago Tribune writer Mark Caro’s new book The Foie Gras Wars, and a celebration of Francis Ford Coppola’s 2005 Rubicon Estate Cabernet, held in the caskroom of the 1860 Rutherford chateau formerly home to Inglenook.

Caro, who is primarily an entertainment writer, has interviewed Francis, his wife Eleanor and their daughter Sofia on several occasions. They consider him a family friend, and so flew him and his wife out to Rutherford for a weekend launch of the book that began with local journalists on Friday and segued to wine club members and the public on Saturday. Focusing on California’s Sonoma Saveur as well as the two other U.S. foie gras producers, Wars is a lively read about a deeply misunderstood food targeted by animal rights activists in great part because it has no lobby to protect it.

Francis, whose new film Tetro, starring Vincent Gallo, comes out in June, hosted CNN to the journo luncheon as they filmed the proceedings for a short doc that will debut with Tetro. But his real passion was discussing what it takes to make a great wine as opposed to a merely “good” one. Francis—and yes, in the life I’m supposed to have, he and I are first-names only—reckons that he’s got a mere seven years left to segue his Rubicon firmly from the good to the great and if he’s unable to do that, he’ll give the whole danged franchise over to his son Roman.

Eleanor was also talking progeny, saying that families have changed over the years. “When our children were young,” she said, “if Francis was going to be gone more than two weeks, we’d pack everyone up and go with him.”

I earnestly rejoined, “Like when you spent three years in Thailand! I just loved Hearts of Darkness!”

She paused politely and continued. “Now, my daughter and her rock star boyfriend have a two-year-old and only see each other when they feel like it.”

(A neighbor with an iPhone quietly Googled Sofia to determine that the “rock star” is singer Thomas Mars of the French band Phoenix, which just reinforces that asking journalists into your environs and then being actually nice to them is a poor idea.)

Francis, a napkin tucked into his lapels over his tie, remembered the early 1970s when he was deeply in debt. Worried about losing American Zoetrope and its San Francisco building, he cast about to make a film that might make some money. He was given what he remembers as a dirty awful book about dirty awful people written by Mill Valley novelist Mario Puzo. The punchline remained unsaid.

Other than that small gushing outburst with Eleanor, I played it cool. A cucumber was I until, after several lovely glasses of 2005 Rubicon Cab, I was in the ladies room preparing to leave. Bam! It hit me that I’d been having lunchwith Francis Ford Coppola!!!!!

I washed my hands and rushed back into the cask room. “Francis! Francis!” I fairly shouted as he was leaving, trailed by the CNN camera. “I’ve been cool up until now but I just have to say what an impact your art has had on my life. I gave birth to my second son while watching all three Godfather films back-to-back and, next to Lawrence of Arabia, Apocalypse Now has to be the best film ever made!”

I panted and sweated, bug-eyed and immediately embarrassed.”Well,” he said appraisingly, “you did keep your cool for quite a while.”

Back to the life I really have, instead of the one I should have. Clearly, I can’t keep my mouth adequately shut for the promised land.

Not a Drop to Drink