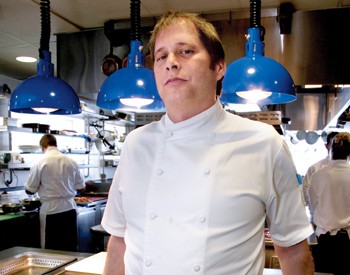 If there’s not a fancy restaurant somewhere called Peasant or Campesino, there should be. Wait a minute. I just Googled it, and there is a restaurant called Peasant. It’s in New York City–and believe me, while the menu is steeped in the simple, robust food of rural Italy, no peasant could afford it. Which helps illustrate my point. The lowly chow of the rural poor has gone highbrow. Peasant food, soul food, poor people’s food–whatever you want to call it–is hot in fine dining. Ingredients and dishes that were once out are now haute.

Restaurant criticism depends heavily on the use of evocative adjectives, and you know you’re reading about one of these rootsy but expensive restaurants when you come across words like “rustic,” “earthy,” “artisanal,” “lusty,” “wood-fired,” “simple” or “slow-cooked.” I’d argue that the popularity of organic and natural foods and the Slow Food movement comes in part from this reverence for all things earthy, bucolic and homey. In a synthetic culture like ours, these–here we go again–simple, rustic flavors are immensely satisfying.

Consider some of the staples of high-end restaurants these days: heirloom tomatoes, broccoli rabe, arugula, short ribs, polenta, pork belly. Not so long ago, these ingredients were considered second-class citizens in the high-end kitchens of America. Not anymore.

At the French Laundry, arguably the most revered restaurant in America right now, one of chef Thomas Keller’s signature dishes is “Tongue in Cheek,” luscious braised beef cheeks paired with sliced calf’s tongue, a dish made with cheap ingredients that don’t usually conjure up fine dining.

At one time, broccoli rabe was thought of as a weed, but it now hobnobs with Belgian endive. Pork belly, a lowly cut of pork better known as a metaphor for ingratiating political influence than as dinner, has become such a fine-dining standard these days that David Kinch, chef and owner of Manresa, calls it a cliché. Even low-rent American comfort foods like meatloaf and hamburgers have been appropriated by fancy restaurants.

Sure, foie gras, caviar and filet mignon are still de rigueur at white-tablecloth restaurants, but what’s interesting is how lowbrow foods now share the menu and sometimes the plate with more traditional “fancy” foods.

What’s going on here? Gastronomic slumming? What makes these humble foods so appealing to diner and chef alike? The answer may be more complex than taste alone.

Kinch, whose Manresa was named one of the Top 50 restaurants in the world by London’s Restaurant magazine and was just named the No. 3 restaurant in the Bay Area by the Zagat guide, says the appeal of peasant fare is the powerful “memory triggers” it elicits.

One of Kinch’s signature dishes is trotters, or pig’s feet. For a cut of meat, it doesn’t get much cheaper than that, but Kinch transforms the lowly cloven hoof into a transcendent dish by laboriously picking out the gelatinous meat and then rolling it up in the flayed skin and frying it to a delicate golden brown. It’s a gloriously rich and delicious dish that didn’t have me conjuring up the meals my mom cooked, but made me a convert to pig paw nonetheless.

For Ken Albala, author of Eating Right in the Renaissance, food trends are anything but new. Foods are forever falling in and out of fashion due to a myriad of social and economic factors. He’s currently writing a book about the cyclical appreciation/denigration of beans.

“The question is really not so simple as foods going from peasant fare to being rediscovered by haute cuisine,” he says. “Quite often when something is a status symbol and suddenly people down the social ladder can afford it, it quickly loses its status, like spices in the course of the 16th and 17th centuries. Or conversely, when something has associations with homeland or ethnicity, it’s seized upon by reverse snobs, like chile peppers and tamales for Mexicans.”

The transformation from low chow to high chow is often propelled by perceptions of scarcity or abundance. In Europe, lobster has long been expensive and somewhat scarce, and therefore upper-class food. But in early America, the abundance of Maine lobster and its widespread consumption led to its status as a junk fish and poor man’s food. Only after it was exported out of the area and fetched a higher price did lobster go upper-class again.

Gabriella Petrick, a New York University professor of nutrition, food studies and public health, is working on an article about lettuce and the vegetable’s changing status in America. In the early 20th century, fresh produce was a rarity in the winter. Eating fresh lettuce carried a certain social status because of its perishability and price. But the advent of refrigerated train cars meant Salinas Valley iceberg lettuce could be shipped across the country year-round.

In time, iceberg lettuce’s ubiquity led to its decline among trend-setting cooks. Because of its abundance, iceberg lettuce became a low-class vegetable and helped pave the way for the wave of fancy salad greens like arugula, mâche, radicchio, bib lettuce and other more rarefied (and expensive) leafy greens that were not mass-produced and were instead associated with the rural cuisines of France and Italy. Today, due to the comfort trend, iceberg wedge salads are back on white tablecloths.

In addition to the effects of scarcity and abundance, the popularity of peasant food is tied up with identity making, says Petrick. Instead of “you are what you eat,” it’s “you eat what you want to be.” Simple, hearty and robust could be used to describe food as well as a romanticized notion of the country-dwelling salt-of-the-earth folks associated with the food.

“I think it’s the myth that people want,” she says. “It serves as a cultural emblem for a particular group of people.”

Oxtail: Not the meat from an actual ox, but the tail of beef cattle. Once a castoff piece of meat given away for free, oxtails now fetch a premium. The tail yields precious little meat for all the effort required to bone it out, but what rich, marrow-enriched meat it is! Oxtails have long been a staple of American soul food and thrifty cultures all over the world, but they have only recently been discovered by American chefs.

While oxtail is usually sold in vertebrae-segmented pieces, Manresa chef David Kinch buys the entire tail. He meticulously removes the meat from the tail in one long sheet, stuffs it with marrow and then cooks it sous vide, a cutting-edge technique in which the meat is sealed in a vacuum-locked bag and simmered at a low temperature. Then the meat is chilled and seared just before serving. Cutting into the meat, it looks like a regular oxtail, a doughnut of meat ringing a white bone. But instead of bone, it’s marrow. “It’s unbelievable,” says Kinch.

Beef cheeks: You won’t find beef cheeks in the meat counter at your local Safeway. These meat morsels were long considered throwaway meat in this country. In Europe and in rural parts of the United States like south Texas, people who couldn’t afford the tenderloin made the most of this scrap meat. Because cattle spend all day chewing, their cheeks are well-developed muscles. When braised or slow-cooked, they become uncommonly rich.

Ratatouille: Ratatouille–braised eggplant, zucchini, bell peppers and tomatoes–is a classic of French country cooking, but you hardly used to see it in restaurants, in part because the rustic, stewy dish doesn’t look great on a plate. It’s home cooking, and it’s back.

Pork belly: Like bacon? You’ll love pork belly. Bacon is made from cured pork belly, a rich, fat-streaked slab of meat from the underside of a pig. It takes hours to prepare pork belly, but the result is a supremely rich, buttery piece of meat.