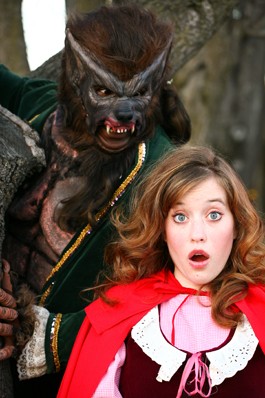 The funniest thing that happened inside the G. K. Hardt Theater during last week’s opening night run of Sondheim’s fairy-tale musical-dramedy Into the Woods took place in the seats. Midway through the second act, as a noisy, angry giant is stomping through the titular woods, a certain character is unceremoniously dispatched by said giant. It is an intentionally shocking moment, and it was —for about a second. Then the audience’ stunned silence was interrupted by the voice of a small child from the front of the theater, loudly and clearly exclaiming, “Oh, my God! ”

“Oh, my God!” is a reaction I had several times throughout an evening that ranked as one of Sixth Street’s rougher opening nights. The performance was fraught with stumbled lines, forgotten lyrics, shaky high notes and confusingly stripped-down orchestrations. It also suffered from whole jokes and rhymes lost due to microphone issues, including volume-timing problems and a lack of microphones for everyone who needs them (I never heard a word the grandmother said).

The story is a cleverly fractured mosaic of fairy-tale characters all thrown together and turned upside down to expose the darker truths embedded in these enduring folktales. The plot revolves around a curse of infertility placed upon the Baker (Jeff Coté) and his wife (Tika Moon) by their next-door neighbor, the Witch (Karen Pinomaki). To remove the curse and become parents, the couple must enter the woods and bring back the ingredients for a magic spell: the cape of Red Riding Hood (Kristin Halsing), the shoe of Cinderella (Heather Lane), the milky-white cow of simple-minded Jack (Tyler Costin) and a strand of golden hair, which may or not need to belong to Rapunzel (LaRena Iocco). One thing leads to another, resulting in young Jack (nicely played and sung by Costin) climbing the fabled beanstalk and killing the giant, which sets the giant’s wife off on a murderous rampage.

Sondheim’s fairy-tale send-up is notoriously difficult to sing, even for professionals, and with its demanding twists and turns and highs and lows, the music has a way of making solid singers look amateurish. Only a handful of this production’s cast members—featuring some of Sixth Street’s strongest, most dependable players—escape unscathed.

In fairness, director Gene Abravaya (whom I’ve praised as one of the North Bay’s best directors of musicals) had less time to prepare than he usually takes, since Woods was a last-minute replacement for the originally scheduled 42nd Street , dropped from this season’s schedule for unstated reasons. Whether it’s this late-in-the-game switcheroo or something else, the show’s pacing, crucial to the dramatic build of this piece, seemed way off, with each scene following the last rather than building in intensity as the action morphed from sly Freudian comedy to moody, philosophical introspection.

One strength is the cleverly abstract set by David Lear—all shifting panels and triangular ramps—but the music is less successful. Under musical director Dan Earl, a local superstar within the world of musical theater, one might expect something lush and multifaceted, but Sondheim’s rich, witty score is represented here by an “orchestra” consisting of a piano and an organ, effectively strip-mining the score for its melodies while casting aside everything else that makes Sondheim’s work so clever and intricate. The result is a strangely depressed musical vibe that emphasizes the score’s more ominous elements while minimizing its underlying playfulness and whimsy.