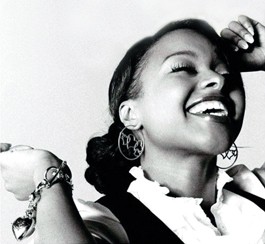 While Keyshia Cole sets out this week on a nationwide tour with Keri Hinson, Christette Michele makes a case for being added to the R&B Grammy triumvirate with her new album, Epiphany, out this week. Not to be confused with the T-Pain album of the same name, the album is also an antidote to Pain’s processed vocals and slangy lyrics. Michele’s a jazz singer at heart, but one wouldn’t know it from her guest appearances on hip-hop songs (Jay-Z’s “Lost One,” the Roots’ “Rising Up,” Nas’ “Can’t Forget About You”). Epiphany should set the record slightly straight.

Michele introduced her gospel-tinged contralto to the world with her Grammy-nominated Def Jam debut I Am in 2007, containing the Alicia-Keys-by-way-of-Whitney-Houston single “If I Had My Way” and a Corrine Bailey Rae knockoff tune, “Best of Me.” As if under pressure or duress, Def Jam lazily promoted a third single, “Love Is You,” which has the 24-year-old singer beautifully channeling her inner Billie Holiday—if Billie Holiday were happy and in love. (It’s a big “if,” but it works.) Seemingly written entirely to displace Etta James’ “At Last” as the wedding song for a new generation, “Love Is You” ultimately went nowhere, and Michele went back into the studio with Ghostface Killah.

“I wanted to make songs that were more edgy, youthful and urban,” Michele has said of her new album, and one wonders if she’s speaking from the heart or just chirping out industry patter. Either way, Epiphany expands Michele’s stylistic palette into pop and hip-hop soul, and it’s a surprisingly rewarding side trip. The title track alone is a brokenhearted rival to Beyoncé’s “Irreplaceable” for kiss-off song of the aughts, and the Ne-Yo&–penned “Another One” struts between hip-hop beats and electric guitars. In “Notebook,” a whistle-register ode to the teenage diary, Michele says that “only my notebook knows how I feel,” but anyone listening between the lines of Epiphany can hear how Michele really feels: she’s simply dying to make an acoustic jazz trio record one of these days. Let’s hope Def Jam is as open-minded as she is.