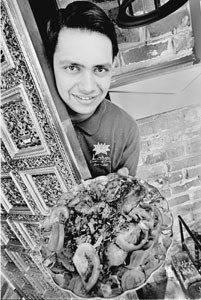 In America, many people color eggs. In India, they color each other. Cultures throughout the world celebrate springtime’s new life and the burst of colors that overtake the barren winter landscape. But Indian traditions seem to add an extra bit of zest.

“All of us would run around and throw buckets of colored water at each other,” says Surinder Pal Sroa, owner of San Rafael’s Lotus Cuisine of India, recalling his youth in northern India during the Holi Festival. “By the time the day was over, you’d be completely drenched and people could barely recognize each other because everyone was covered with colors.”

The main part of India’s spring celebration, the Holi Festival falls on the day after March’s full moon. This year it falls on Friday, March 29. The celebration is all about color–color on the face and on the clothes and in the hair and on the streets. Weeks beforehand, stores stock up on powder of all hues. The powder is then smeared on the faces of laughing friends or mixed in water and sprayed out of water guns or blasted out of water balloons.

“You spend your entire day looking around because you never know where it’s coming from next,” Sroa says. You walk past a doorway, and someone runs out and smears you with powder. “Or you go past a corner,” he adds, “and boom!–you get hit by water. People who are riding in a train or car, they know to keep their window shut or they’ll get hit too.

“It’s a good time. This is the one day of the year that everyone has an excuse to mess with everyone else.”

Although Sroa misses some of the traditions of his native land, he has adapted to northern Californian culture remarkably well. “Look at this,” he says, opening up his menu. “See, we serve about 10 different vegan dishes here. At most Indian restaurants, they wouldn’t even know what vegan means. We have to know. This is Marin.”

Sroa’s path to Marin–and the opening of his successful restaurant–can be traced to January 1984 when the young adventurer, then 22, sailed into Oakland. He was working as an assistant steward on a Greek ship. When the ship docked, Sroa walked off and decided that California would be a good place to stay. So he just kept walking.

“I didn’t plan on living here,” he says. “But staying just seemed like the right thing to do. I was the youngest in my family, and maybe because of that I decided to try a new route. You know, the youngest gets more pressure. There are all those older brothers and sisters pushing down, telling you what to do,” adds Sroa, the youngest of 10 siblings.

He met up with people he knew in San Jose, and then mutual friends introduced him to a single, attractive American woman. The two married later that same year, and Sroa was eventually granted citizenship. Before jumping to conclusions, keep in mind that Sroa and Linda have been married for 18 years now and have an eight-year-old son together.

“We met and we clicked, and that’s all you really need before you get married,” Sroa says. “The work that’s involved in every marriage comes after the wedding.”

And the work that’s involved with work just keeps coming. Sroa’s first long-term job, lasting three years, was on a cleanup crew for Winchell’s Donuts. From Santa Rosa to San Jose, whenever a shop was in need of repair, he and the rest of the team would go there and straighten things up.

Following the stint with Winchell’s, Sroa worked as a bakery manager for 10 years for grocery stores in Petaluma and then in Millbrae. During the final four years, he would work all day at his managerial job and then work nights at a friend’s restaurant. He started off just helping out and then became co-owner.

“I really enjoyed working at the restaurant. And it got to the point that I wanted to do things my own way,” Sroa says. “So I bought this place and opened it in October of 1998.

“I’m a people person, and my goal is to not only serve the very best food, but to also give customers the very best service as well.”

Every single person in the restaurant industry claims to be a people person. But I have to say there is something disarmingly honest about Sroa.

For one thing, I’d seen him before our interview, when he didn’t know I was looking. I had arrived early to our appointment and was walking down the block when I saw a man in the distance walking in the opposite direction. He caught my eye because he was so friendly, smiling at everyone, saying hello, nodding his head. You know the rest of the story. It turned out to be Sroa, a true people person.

Second, how many people with a successful restaurant that leans toward upscale wouldn’t hedge around the fact that they began their food industry career by cleaning up doughnut shops?

Sroa’s proud of it. “I believe in hard work,” he says. “Any kind of honest work that you do your best at is good work. And I really believe in karma. If you do something good, it will come back to you.

“Plus, I like keeping things clean, so it was okay.” The restaurant, including the kitchen, is spotless. And Sroa is habitually straightening things up as he shows me around.

He picks up a small piece of lint from the floor and straightens out a picture hanging on the wall. Like so many of the other pictures, statues, and various artworks that fill the restaurant, this one was found by Sroa and his wife on one of their visits to India. The ornate front door was custom crafted by an artisan he met there. “It took him a whole year to finish it and ship it here, but I’m happy with it,” he adds. “We pick everything out ourselves,” Sroa boasts, adding that Linda is in charge of interior decoration.

Also adding to the atmosphere is the nifty retractable roof in the main dining area. On warm days and nights, the roof slides back, exposing the open sky. And now that spring is here, customers will be dining under the sun and the stars more and more.

“Everyone loves this time of year, don’t they?” Sroa says. “It’s sunny and the flowers are coming out. That’s the celebration behind Holi. The colors signify the coming of spring and the crops growing and new life.”

There are a few traditional dishes associated with the festival, he says, “but to tell you the truth, I don’t remember any special meals for Holi. What I do remember is the sweets. That’s what we would eat all day long. Sweets and more sweets,” says Sroa, who serves several typical desserts at his restaurant. Among these are kulfi, a saffron-flavored Indian ice cream with nuts; gulab jamun, a milk pastry served with hot honey syrup; ras malai, cheese patties in sweetened milk flavored with rose water and nuts; and the popular kheer, a chilled rice pudding.

“Everyone in India absolutely loves sweets, and they eat them all the time, not just for Holi,” he says, taking yet another sip of the restaurant’s sweet and delicious chai. “They can’t help it. It’s in their blood.”