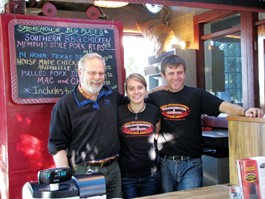 Larry Vito's Barbecue is smokin' fans out of the woodwork

The wizardry of Harry Potter’s continuing saga recently filled all nine theaters in Sebastopol’s Cinema Complex. But his isn’t the only magic being conjured up there. In the theater parking lot, working outside the backdoor of a small building that sits kitty-corner to the movie house, world-renowned chef Larry Vito feeds hardwood logs into an industrial steel smoker, imparting Texas-style barbecue with his secret signature flavors. The pile of apple-, oak- and nut-wood logs shrinks as he feeds the smoker’s wood box, which can accomodate six whole hogs, 120 racks of ribs or 200 chickens inside, slowly cooking to juicy perfection.

Walk around the front of this unassuming building, past the Patisserie Angelica sweet shop, and you’ll discover the welcoming covered veranda that is the new home to Larry Vito’s BBQ Smokehouse Restaurant. Diners order the wide variety of barbecued meats, homemade appetizers and side dishes at the corrugated-metal-clad counter and eat at homey picnic tables covered in red, checkered cloths. Old saddles, bridles and other ranch paraphernalia grace the walls, and barbed wire wraps protectively around the light fixtures. Wagon wheels line the edge of the deck, and small wooden pigs whimsically fly in the trees that shade the restaurant from the street.

Vito’s menu offers succulent Memphis-style pork ribs, tender North Carolina pulled pork, caramel-crusty chicken wings, still-pink smoked salmon, lean yet flavorful house-made andouille chicken sausage and butter-soft brisket. All are prepared Southern-style, rubbed with Vito’s secret blend of spices, and then slowly smoked over hardwoods using indirect heat. This regional method avoids the use of gas cooking, which Vito says taints the meat with its sulfuric components, and the use of soft woods, which he believes add too strong a flavor. Most importantly, sauce is not used during cooking but is offered as a condiment on the side, to be employed sparingly to enhance the flavor of the meat.

Vito notes that in some parts of the country, locals eat their barbecue “naked,” leaving the sauce for tourists. His tables are graced with two homemade varieties of sauce, a tart and traditional North Carolina variety and the restaurant’s original barbecue sauce, developed after 25 years of experimentation. Either way, the patrons at the restaurant, kids and adults alike, happily eat with gusto, washing down the meat’s subtle heat with house-made strawberry lemonade or iced tea with fresh mint.

All meat-struck homilies aside, one does wonder how a classically trained five-star chef who has cooked with a pantheon of culinary celebrities ends up smoking meat in a small-town theater parking lot? Simple: pure love.

Growing up in upstate New York in a tiny town of 500 on Lake George in the Adirondacks, Vito helped his grandmother with the cooking at her resort, and by age 18 was running the kitchen. College found him majoring in English but morphing into culinary arts, where he studied his passion at New York City’s Culinary Institute of America.

As he gained experience, his star rose, and Vito eventually trained with such gastronomic giants as James Beard and M. F. K. Fisher. Many meals and miles later found him on a road trip through the Deep South, “touring and working as a guest chef,” he remembers, cooking with local luminaries and sampling the regional fare. “I spent one week with Emeril Lagasse—before he was famous—at Commander’s Palace,” Vito says. “Then I spent a week with Paul Prudhomme, eating gumbo and crayfish étouffée with a fistful of butter in it.”

After a few weeks tasting the rich meals of New Orleans, Vito drove west and found himself in East Texas. “I had an amazing epiphany in a strip mall there,” he recalls. “It was a tiny, nondescript place where they served food on paper plates, but I will remember the chicken and ribs forever. That meal was more memorable than anything I had on the whole trip.”

After a stint with Wolfgang Puck in L.A., Vito worked with Alice Waters at Chez Panisse in Berkeley. It was 1985. He visited Santa Rosa to meet Laura Chenel, pioneer of American-made chévre, and fell in love with Sonoma County. “Once I saw the area, I knew this is where I wanted to be,” he says. Two years later, he moved to San Francisco and accepted the position of executive chef at the Stanford Court, then rated the No. 1 hotel in America and 15th worldwide. He spent seven years at the hotel restaurant before moving to Sonoma County.

Once in the North Bay, he eschewed restaurant work, instead creating a high-end catering business, which also offered barbecue for cowboy weddings and wine-pairing events. He began to actively nurture his passion for barbecue, experimenting with a $15,000 professional pit while mentoring with Mike Mills, three-time consecutive winner of the Memphis in May World Championship Barbecue Cooking Contest, considered to be the pinnacle of barbecue cook-offs. Vito finally jumped into the proverbial fire by deciding to split his business in two, spotlighting his obsession by focusing on barbecue.

His modest restaurant is a family affair with Larry serving as pit master, while his brother Alex manages the restaurant. Larry’s wife, Renée Fritze, is the executive events coordinator for the catering company.

The company mission (“Raising the bar in barbecue”) highlights its focus on educating and delighting the public so they “finally know what real barbecue is,” as opposed to grilling or slathering meats in overly sweet or tongue-burning sauces. Vito is adamant in his belief that true barbecue is flavored through smoking and indirect heat from hardwoods, applied over a long period of time.

“There’s something primal about fire and smoke,” he says. “The flavor of good barbecue is almost addictive, and people who haven’t had real barbecue don’t know what they’re missing.” He explains that ribs cooked correctly are not “falling off the bone,” as many diners believe. Instead of describing ultimate tenderness, meat that falls from the bone is generally overcooked, sometimes to the point of mushiness. Instead, meat should pull cleanly from the bone but remain intact.

Likewise, sauce shouldn’t be used to mask the flavor of overcooked meat. As one of his relatives colorfully put it, “Saucing up falling-off-the-bone barbecue is like putting a party dress on a dead body. No matter what you do, it’s never gonna get up and dance!” Vito’s goal for raising the bar toward perfection also holds true for the many side dishes on the menu; he altered the recipe for the macaroni and cheese “at least 15 times,” he says, before he was satisfied.

Perhaps the chef’s real mission reflects a different type of passion. “My wife and I love barbecue, and she’s from Santa Rosa,” he says with a smile. “She always talked about Jesse, a legendary local character who used to have an unrivaled barbecue joint where Pack Jack’s was on Highway 116. I wanted to impress my wife, because she didn’t think my barbecue could match Jesse’s. It’s hard to compete with a legend.”

Other barbecue to love