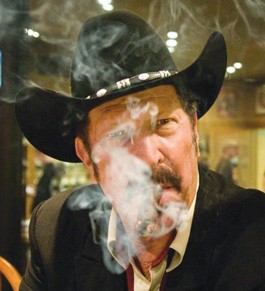 Kinky Friedman knows something about everything

Kinky Friedman feels good about feeling bad. “I’m a folk hero, not a celebrity,” he says. “You fail at something long enough, you become a legend.” Friedman delves into a wide variety of projects and makes his mark on every one, but he’s still quick to poke fun at himself. “This is the curse of being multitalented,” he says over the phone from his San Antonio home. “If I wasn’t multitalented, if I just did one thing, I’d probably be pretty good at it.” But the fans he has accumulated through his music, mystery novels, bids for public office, Texas Monthly column and animal-rescue organization would argue that his versatility is exactly what makes him so compelling.

With a black cowboy hat shoved atop his head and a cigar forever resting between his fingers, Friedman dropped onto the public radar in the ’70s as an incisive, satirical and politically incorrect voice in country music. He and his band, collectively known as Kinky Friedman and the Texas Jewboys, toured with Bob Dylan and Willie Nelson, and performed on the first season of Saturday Night Live.

A taped interview with Friedman on Austin City Limits became the first recording of the show to be banned from broadcast due to content, but has since been released on DVD.

The songs he plays may hail from decades past, but Friedman assures that their message remains as relevant as ever. “I haven’t written a song in 25 years probably, so these songs are going to be older than a good bit of the audience,” he admits. “But that seems to work. We just did a tour of Europe last year and that was a sold-out tour. The people in the audiences were very young. They knew every lyric and they’d read every book.”

This summer, for the first time in 20 years, Friedman hits the West Coast in his “Go West, Young Kinky” tour. He plays Aug. 5 at Studio E in Sebastopol. Despite the age of his songs, he expects his audience to cross generation boundaries. “This is not nostalgia,” he says. “It’s not just a bunch of old farts coming to hear something that—well, I’m sure some of them will be there—but mostly it’ll be an eclectic group.”

Friedman, a Texas native, grew up enamored with the sounds of country music, especially artists like Hank Williams and Johnny Cash. “It can take language and distill honesty like moonshine,” he says of the country genre, “at least at its best. Today, I don’t think the state of country music is very good. You see these publishing brothels in Nashville, these big buildings where two or three ‘writers’ meet every morning at 8:50, sit in a room and write a song. The results are pretty weak. The great songs are written accidentally, I would say. Great artists produce accidentally. Or by people who are trying to pay the rent.”

When asked whether he feels his best songs have been accidents, he replies with an unequivocal affirmative. “The person who sets out to write the great American novel or to paint his masterpiece never does.”

After the release of his most recent album, in 1983, Friedman penned his first mystery novel, Greenwich Killing Time. The switch from lyrics to prose was triggered by a classic defender-of-justice moment in which Friedman saved a woman from being robbed at an ATM. Fittingly, the majority of Friedman’s works star a fictionalized version of himself as the detective protagonist.

When asked whether the real Kinky Friedman would make a good detective, Friedman takes a rare pause before responding. “I think I would,” he says, “because I know a lot about fictional detectives, like Miss Jane Marple and Sherlock Holmes. Between the two of them, if you’ve read them thoroughly, you can learn a lot. Most of it is little things, little details, people that remind you of other people.”

Friedman discusses his literary and songwriting forays with alternating self-deprecation and evidence that he cares deeply about what he does. “That’s 29 books I’ve churned out—I mean, carefully crafted,” he jokes. But two minutes later, when talking about his favorite mystery writer, Raymond Chandler, he gets philosophical. “[Chandler] believed that art is anything that burns with its own heat. I think that’s a great definition of art,” he says.

Friedman keeps these words in mind when live shows offer him a glimpse of his music’s continued potency. “When we do a show and the songs are so old and they work and you see people really relating to them and understanding them and maybe getting inspired perhaps by something that is really indefinable, then you’ve got a winner.”

In his newest book, Heroes of a Texas Childhood, Friedman pays homage to the people who inspired him most during his formative years. “I think what they have in common is the failures and tragedies in their lives and how they dealt with it,” he says. “None of these people were lucky or in the right place at the right time. They’re not like politicians today.”

Friedman makes no secret of his dissatisfaction with the current state of American politics. “‘Poly’ means more than one; ‘ticks’ are blood-sucking parasites,” he deadpans. Unafraid to blaze trails in music, he follows the same DIY edict in his participation in the democratic system. In 2006, Friedman ran for governor of Texas on the Independent ticket, a party affiliation (or lack thereof) that he credits partially with his loss.

But why join the ‘ticks’? “I thought somebody should do something,” he says. He tried again this year, running as a Democratic candidate for state agricultural commissioner. He didn’t win, but he came closer. “We came within two points of winning, even though my slogan was ‘No Cow Left Behind.’ I’m disappointed in the Democrats. I never expected much from the Republicans. The Democrats have surprised me with their self-interest. They don’t really care about the state or the future. They seem to only care about their party. They’ve kind of become the vain guy admiring himself in the mirror.”

Friedman firmly believes that disrupting the two party system is the only way to affect real change. “The two major political parties have really fulfilled George Washington’s worst nightmare,” he says. “This is a government completely void of common sense.”

Friedman marketed his serious campaigns with irreverent taglines like “How hard could it be?” and “Why the hell not?” He cites a long line of public figures who have played with the unlikely pairing of humor and politics: Winston Churchill, Ann Richards, Will Rogers, Mark Twain. “[Humor] has a lot to do with truth, and it’s a way of conveying it to people,” Friedman explains. “Humor is my wooden leg. I’m stuck with it. I asked people which they prefer: a governor who could tell a joke or a governor who is a joke.”

But the Kinkster is leaving politics, at least for the moment, in favor of a return to his musical roots. “It’s just a better thing to be a musician than to be a politician,” he says. “I campaigned on the idea that musicians could better run our country than politicians. We wouldn’t get a helluva lot done in the mornings, but we’d work late and we’d be honest.”

In the meantime, Friedman is keeping busy helping Billy Bob Thornton compose his memoir. Although Friedman’s admiration of Thornton’s work is obvious, he’s not wearing a vial of Thornton’s blood around his neck. “But I might be by the end of this book,” he laughs. “Anything’s possible.”

A literary collaboration with Willie Nelson is also in the pipes. Longtime friends, Friedman and Nelson (whom Friedman refers to as “the hillbilly Dalai Lama”) are often in each other’s company, but Friedman hasn’t seen Nelson since he chopped off his signature long white braids. “I’m not prepared for it,” Friedman laughs. “Big mistake, I think, but considering it’s about 190 degrees down here, maybe that had something to do with it.”

As if songwriting, novel writing, social commentary and campaigning weren’t enough, Friedman has also founded Utopia Animal Rescue Ranch, an organization that has adopted thousands of stray and abused dogs during the 12 years it has been in operation. “Money may buy you a fine dog, but only love can make him wag his tail,” Friedman smiles.

Despite all his funny business, Friedman produces witty social commentary that challenges his audience to both laugh with him and take him seriously. He puts real consideration into his work. “If you’re happy and successful, it distances you from your art,” Friedman observes. “The more famous you become, the harder it is to write. You’ve got to fight happiness at every turn. Everything great was produced by somebody who felt bad.”