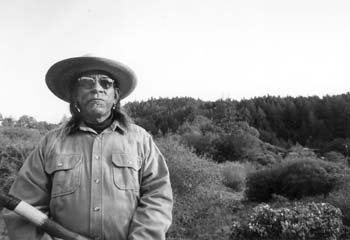 Logging in the Russian River Area

Timber wars: When the logging industry pushed hard on an Alpine Valley neighborhood last fall, Randy Hurley and other residents struck back .

FORESTRY OFFICIAL Dennis Hall was on the hot seat. Posted on the wall behind his head a sign read: “Maximum capacity: 20.” Seated at the big table in front of him were 23 residents outraged at proposed logging above their homes near the tiny town of Duncans Mills in the Russian River area. In 90 minutes of cordial yet pointed exchange on a Monday morning, Hall listened to technical questions in a specialized forestry jargon of abbreviations as well as plain talk about public safety and wildlife.

By lunchtime, residents had made their point. Hall, review-team chair for the California Department of Forestry, said he would not accept the disputed timber harvest plan, or THP, for consideration. He would require improvements before the plan to log a sensitive forest above Austin Creek Road could enter the CDF’s approval process.

For the neighbors on Sylvia Drive, Hall’s decision was only a small victory. The THP will come back, and there is little likelihood that the nearly 40 members of the Austin Creek Alliance can stop it.

Summertime is logging season, and a new onslaught of timber harvest plans have had opponents scrambling to express their concern and protect their interests in rural residential areas, which increasingly have become battlefields between developers–especially giant grape-growers–and residents trying to preserve the rustic character of their neighborhoods.

Under the Forest Practice Rules, public protests might affect the details of a THP, but have little chance of actually preventing logging.

“The process is very quick,” says Jay Halcomb, coordinator of Russian River Residents Against Unsafe Logging. “We have no time to get organized… . It’s a desperate situation.”

Near the Russian River, five new THPs have neighborhood groups alarmed. Three plans clustered on a steep mountain form essentially one large area of 585 acres directly above a community of 60 homes off Austin Creek Road. In East Guernewood, a plan calls for cutting 89 acres and constructing seven crossings on Hurlbut Creek, a steelhead-bearing tributary to the Russian River. Across from Guerneville’s Northwood Golf Course another THP aims to cut 89 acres in a timber stand that includes the county’s oldest and tallest tree, known as the Clar Tree, a 336-foot-high, 1,000 year-old redwood.

Meanwhile, across the county on St. Helena Road, the Indian Rock Alliance has filed a lawsuit against the CDF over a THP filed last year near the origin of Mark West Creek (see “The Unkindest Cut,” Nov. 13).

IN EACH CASE, the CDF is required by law to complete the approval process within 45 days. Although that deadline often is extended, the speed of the complex, multiphase process leaves concerned citizens bewildered. “There just isn’t time when a THP lands in the backyard of someone who doesn’t understand the process, has never seen a THP, and doesn’t know what the hell is going on,” says Helen Libeu, timber consultant to RRRAUL and Sonoma County’s foremost citizen authority on timber harvest rules. “When you figure it out, it’s too late.

“The CDF does not have the authority to extend the built-in time limits unilaterally,” Libeu explains. “They have to ask the forester who submitted it if he would agree. And normally they do, because it’s sort of an unspoken blackmail arrangement in which each side is bluffing the other.”

Libeu says even the CDF has proposed that the deadlines be extended, but any rule change requires a change in the law requested by the state Board of Forestry. The board, Libeu claims, is industry-dominated and won’t ask a legislator to sponsor such a law. “I think they should have the unilateral right to extend the time limits for good cause without having to go hat in hand to the plan submitter,” says Libeu.

The CDF’s Hall disagrees. “I don’t think more time is necessary,” he says. “If I was a landowner I would probably be hesitant to have that kind of regulation because that’s basically open-ended, and that’s difficult.”

But the difficulty for those opposed to logging begins when the official THP notification arrives from the CDF. The notice states the earliest possible date of approval for logging–only 15 days after the CDF has accepted the plan for consideration.

The CDF only rarely approves plans this quickly.

“Citizens get panicked and think there is no time to do anything,” says Libeu. “It keeps some people from even getting active, because they think it’s all over. The CDF could make that better. The time to respond is the first time you hear about it, but don’t presume that the first possible decision date is anything but a fiction. It’s always later.”

On this point, Hall agrees. “It’s like sticker shock,” he says. “They get this notice in the mail, and it’s like, geez, the earliest date to approve the plan is 15 days from today. And by the time they get it, maybe five or six days have elapsed and they’re thinking, wow, the CDF is just going to shove this through the system.”

Hall says that less than 1 percent of THPs qualify for the earliest possible approval date. Nonetheless, with the notification, the fast-moving, hard-to-follow approval process begins. Citizens say just finding out about review meetings is an inappropriate hassle. “You have to call every day,” says Austin Creek Alliance member Pamela Connelly. “And in that short time you have to try to get as many bodies there as possible. The public doesn’t have enough time to get people there.

“I think it’s planned that way.”

SECOND ONLY to the fast-paced approval process is the issue of cumulative environmental impacts and how the CDF regards them. The prime example of cumulative impacts is the Russian River. Already degraded by human activity, and home to endangered salmon and steelhead, how is it impacted by logging near a creek tributary? The rules call for “professional judgment” about cumulative impacts, but state plainly, “No actual measurements are intended.”

Says Libeu: “The Board of Forestry was forced to adopt cumulative-impacts rules by citizen litigation, so their heart wasn’t in it. So they adopted something filled with all sorts of verbiage. My lord, you’d think if they did all that everything would be beautifully taken care of. But it says in there three times: ‘No actual measurements are intended.’ How are you going to say anything about the water temperature if you can’t use a thermometer? They simply never regard that for anything. In the paper THP, if there’s some cumulative-impacts verbiage there, that’s all the CDF cares about.

“Same is true for other rules.”

Inadequate professional judgment on cumulative impacts is one of four points of the lawsuit filed by environmental attorney Kimberly Burr on behalf of the Indian Rock Alliance in eastern Sonoma County. “They want to drag logs across a Coho-bearing creek,” argues Burr. “There is no way to avoid sedimentation. The creek is already overwhelmed. They even say that in the plan.”

The Forest Practice Rules call for “professional judgment” to gauge the extent of cumulative impacts.

“I do know that the people in this office take them seriously,” offers Hall. “But they aren’t measured. The system does rely on professional judgment. We are trying to mitigate the plan so there are no significant impacts. One of the unfortunate things is, if we haven’t developed trust with the public, and often times that is the appearance–we don’t have their trust–it won’t matter how many professionals we have out there, they won’t think we’ve sufficiently mitigated those plans.”

Libeu says the mitigations don’t do enough: “I have a letter from a well-respected forester who has worked not only for the CDF, but for Georgia Pacific and Louisiana-Pacific, and as a consultant. She wrote the board saying they ought to knock off that dumb rule. She submitted a THP once, saying, ‘Of course this will have significant negative impacts.’ They approved it anyway.”

THP review is further hampered by Pacific Lumber’s habitat conservation plan that has diverted the attention of the Department of Fish and Game and the Water Quality Control Board from the THP review process, Libeu says. Although the rules describe the intimate involvement of these agencies, Libeu contends that over the last 18 months they have been mostly absent from the process.

Hall says he gets adequate participation from these agencies via e-mail and the telephone. He concedes the review process could be re-evaluated in terms of staffing.

“Maybe [we should have] more people altogether,” he says, “reviewing agencies and field inspectors.”

So with little chance to stop proposed logging, what can the public do short of expensive litigation? The answer, state forestry officials and activists agree, is: Stay involved.

“The public can make a huge difference in how much better it turns out,” notes Libeu. “And they should get active for that reason. Also, it sets up the record for legal grounds if they must sue. The main thrust, in my opinion, should be to get the plan improved and highlight the performance of all the state and private foresters.”

Adds Hall: “Continue to be involved in the review process. The public concerns, the letters that we get, are seriously considered. We go through those with a fine-tooth comb. Often it seems like we give canned answers, but often the questions and the situations are very similar. Obviously, I’m not at ease with the 20 or 30 people sitting in the room with me, but I do appreciate them coming.”