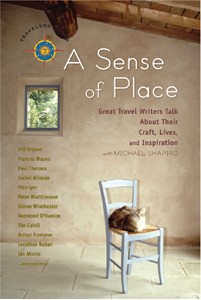 A brief glance at what the neighbors are up to

There’s a beautiful backwards logic to Sebastopol travel writer Michael Shapiro‘s new collection of interviews, A Sense of Place: Great Travel Writers Talk about Their Craft, Lives and Inspiration (Traveler’s Tales; $18.95). Seeking out the greatest living travel writers in the world, Shapiro himself becomes the traveler, visiting such essayists as Bill Byrson, Tim Cahill, Arthur Frommer, Peter Matthiessen and Redmond O’Hanlon in the easeful sanctity of their homes, offices or hometowns. While they are comfortably ensconced in familiar surroundings, Shapiro casts himself as interloper, seeing what they take for granted with newly refreshed eyes.

Overviewing each author’s work, allowing a peek into their homes and then presenting a frank question-and-answer format for interview, Shapiro’s collection excerpts work by these mentors while a providing warts-and-all discussion with apparent little edit. There’s a lot of courage needed in reprinting one’s own human efforts at interview, and Shapiro doesn’t shy away from letting the reader see him stumble, which endears us to him all the more. Of the 18 authors interviewed, the famously prickly Paul Theroux was the only one to not meet Shapiro in person, insisting instead on e-mail exchanges that sometimes consists only of such arch replies as “Reviews! Ha!” When asked why he splits his time between Hawaii and Cape Cod, Theroux spits back, “Is this a serious question?”

Shapiro gently prods in a follow-up e-mail, finally prompting Theroux to grudgingly allow that there’s something “magical about marine sunlight,” an admission that suddenly makes the contentious author (who reveals that his love life has been so tumultuous that he’s never once heard those four wonderful words “Your lunch is ready”) accessible as a man.

Whether flying to Cortona to interview Frances Mayes in the restored Italian home that’s caused such a fuss in bookstores, movie theaters and even furniture departments (a recent sofa line was launched in Under the Tuscan Sun‘s honor); driving to San Rafael to be regaled by the elegant novelist Isabel Allende; or trekking to Montana to hear Tim Cahill spin tales about near-death stupidity and shark cages, A Sense of Place is so verbal that it’s tantamount to settling down with an audio book.

As an exercise in hearing writers speak–and speaking is something that writers do very well–this remarkable collection is a pleasure from start to finish. Shapiro allows a darker element to further shade his two-year adventure of traveling to the travelers by admitting in the prologue that his father slowly succumbed with great pain to cancer during the book’s genesis. An established travel writer who has written on the far-flung for the Washington Post, the Los Angeles Times and other notable publications, Shapiro learns first-hand about his craft from some 18 masters while privately traversing the sorry path of loss. He emerges, as should any hero, stronger in its passage.

Also up for adventure, albeit that of the last century, is Santa Rosa historian Bruce Henderson, whose True North: Peary, Cook, and the Race to the Pole (W. W. Norton; $24.95) recounts the stories of these two Arctic adventurers and questions who really was the first to attain the chill, black reaches of the top of the world. Robert Peary claimed to have reached it in 1909; Frederick Cook, in 1908. The world believed Peary, a man who once warned his mother, “Remember, I must have fame.”

Peary, Henderson reveals, was also the sort of man who brought his mother along on his honeymoon and had the character to grimly shoulder Cook’s accusation that he had “stooped to every crime from rape to murder.” Positing that Cook really did reach the Pole first, Henderson lays out a cogent and persuasive narrative of the emnity and peril of these two larger-than-life characters, Cook only losing to history because he refused to defend himself against Peary’s relentless slander. Delicious.

While some travels draw large strokes, many of us simply want to find a place of comfort, one that can be claimed as “home,” whether it be a hotel room, a car’s front seat or a Victorian manse in the African savannah. The hearth is the subject of Dominican University professor Thomas Burke‘s new collection of short stories, Where Is Home (Fithian Press; $12). Focusing on brief moments in the lives of gay men, Burke’s minimal stories arc quickly, whether quietly recounting a dying old man’s last wasting days, or sketching one white family’s Swaziland rite of passage, in which a traveling painter’s annual visit serves as the homosexual introduction for the next boy in the family’s coming of age.

Young men and women occupy Santa Rosa cartoonist Trevor Alixopulos, whose zinelike self-published darkly comic novels Quagga and Dread are well worth seeking out. Dread is a noir superhero thriller that gives me the creeps even to write about, while Quagga is all too reminiscent of clubbing days of yore, when one isn’t about to let a little vomit and drug abuse get in the way of a great night out and an awful ensuing morning spent emphatically in.

Far more sobering is Healdsburg environmentalist Daniel Imhoff, whose impassioned book Paper or Plastic: Searching for Solutions to an Overpackaged World (Sierra Club Books; $16.95) graphically demonstrates how plastic wrap, cardboard and the individualization of prepared products is overwhelming even nonindustrial societies. Carry a mug, Imhoff advises–that takeout cup is completely unnecessary and in its own small way, incredibly wasteful.

Similarly, carry your own water bottle, please. The amount of discarded personal water bottles has exploded in recent years, and aquifers in prime upscale water destinations, if such a thing can be imagined, are rapidly being depleted. Furthermore, bottled water is often only ordinary tap water bottled at a factory. At least at your house, you know what it looks like coming from the faucet.

More like a textbook than a work for the average lay reader, Paper or Plastic is nonetheless extremely accessible to the ordinary consumer who would like to make informed daily choices. Most laudably, while indeed printed on recycled paper, Paper or Plastic is smart enough to sidestep the earnest amateur graphics most earth-friendly products bear, making it visually bearable to those of us who even quail at the look of a Working Assets bill.

Imhoff provides concrete suggestions for and examples of sustainable consumption, going so far as to provide case studies of waste reduction undertaken by companies as diverse as computer printer giant Hewlett-Packard and the natural cosmetics firm Aveda. It is possible to consistently make choices that support the well-being of us all, Imhoff counsels, and it’s not even that hard.