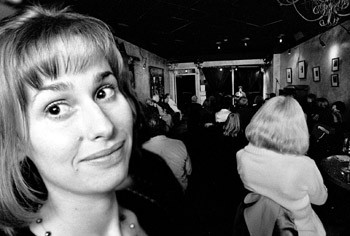 All Lit Up: Jordan Rosenfeld is the powerhouse behind the LiveWire Literary Salon at Zebulon’s Lounge.

On the Write Path

Jordan Rosenfeld is a writer, make no mistake about it. And she likes it that way. A few thwarted lit mag attempts and a postcollegiate stab at massage therapy haven’t distracted her from her one true path, and she’s now perfectly happy to claim her rightful place in the pantheon.

That’s where the path gets thorny. Because although competition may be tough in the world of massage therapists, writers are granted a special place in professional hell. But Rosenfeld has a passion, and she’s determined to see it get somewhere.

Her latest endeavor, successful by any standard, is the LiveWire Literary Salon, ongoing biweekly at Zebulon’s Lounge in Petaluma. It’s a classy affair–Zebulon’s being a classy place–and Rosenfeld has put her personal imprint on the event. Each evening has a theme–from “Split at the Seams: Humorous Writing” to “Blurred Edges: Where Truth and Fiction Meet”–and Rosenfeld curates the events as if they were each an individual exhibit.

The 28-year-old Petaluma resident is one of those people who has wanted to be a writer her whole life, though at eight years old she thought of herself more as an authoress–conveying more nobility, certainly. Her life is a study in the serendipitous turns a dedicated writer takes on that labyrinthine path to book publication.

In college at Sonoma State, Rosenfeld tried other things, just to make sure she was on the right track. She finished three-quarters of a minor in communications, and hated it. She toyed with the idea of getting a masters in journalism but found that the imagination was a more powerful tool than the facts. “I find I can tell a real story better when I can switch the details around,” she says. So massage therapy became a way to support herself as a fiction writer.

Rosenfeld is a doer: she likes to have irons in every fire, hands in lots of pots, trains in every station. After graduation, she and a friend started a magazine called H.E.R. It suffered that specific anemia so familiar to starry-eyed editorial types: too many story ideas, too little money. After two issues were published, the venture folded. She caught the bug, though: “I got a taste of creating something. . . . It gave me access into a world that I hadn’t had access to.”

A few more failed attempts at publishing ventures didn’t faze Rosenfeld; after all, writers are a resolute breed, and fallen journals are like prison tattoos–a mark of pride. “I always have longed to start and create something that’s mine, that’s contributing to culture and literature,” she says, “particularly literature because that’s my bent, and I just never have been able to pull it off, because no one ever has the money.”

Perhaps LiveWire is her pulling-off. It’s been going–and going strong–since August. Rosenfeld came to Zebulon’s via a typically Rosenfeldian route: a combination of serendipity and tenacity. She was selling her homemade jewelry at the Petaluma Farmers Market, and she started talking to Karen Ford, co-owner with Trevor Cole of Zebulon’s. Ford told her about the plans–good jazz, wine, art, and atmosphere–and Rosenfeld asked if they planned on doing literary events. Ford said probably, yes, and then Rosenfeld “completely forgot about it.”

After Zebulon’s opened, she strolled in one day and asked Cole about the literary possibilities of the space. “He looked at me like I was the archangel come to save him,” she laughs. “They had a literary event started and the guy who did it completely dropped it. But the calendar was all planned, the next event was two weeks from the day I walked in, and I said, ‘OK, I’ll get something together.'”

So Rosenfeld sent out an e-mail to every writer she knew and tapped into that vast network of Sonoma County writers. Within two days, she says, she had about 300 e-mail addresses which she used to send out a call for readers. It took her three days to sort through the responses.

The readings are structured around themes. An environment was what she was after–and the owners of Zebulon’s were on the same environmental page, as it were. “They wanted to create an ambiance and a place with a vision, and I feel the same thing about a reading–it should have a feeling to it.”

The first night was titled “Tall Tales and Short Stories,” and featured writers Terry Ehret, Bebek McGhee, Chris Mastin, Liz Hannon, and Rosenfeld. The event drew more people than she, Ford, and Cole had expected. Somehow, Rosenfeld had hit upon a need.

Rosenfeld sees that need as the intersection of two worlds: the obscure yet active writer “who’s at home struggling, maybe in writers’ groups, maybe goes to writers’ conferences,” and the regularly published writer. “What about the entire world in between?” she asks.

Rosenfeld, who has had a few pieces published but not a book, relates to that in-between world. “What if I never make it? What if I sell one book, and that’s it and my tour is over and no one ever hears about me again?” It’s a worry familiar to any writer. So in creating this space where writers can feel confident and in good company, and where they can get up on the stage–which can be quite empowering–and read their work, Rosenfeld plays not only to her own needs but to those of a community.

The need is there not only for the readers but for the listeners too. Zebulon’s is a sublimely calm place, its soft lighting playing with the brick-colored walls and the sparkles enameled into the tables. LiveWire is free, meaning the $6 entry fee you might have paid elsewhere can go toward a luscious glass of wine.

And LiveWire doesn’t get in the way of Zebulon’s promise of nightly music; the Emmanuel Vaughan Lee Trio follow LiveWire at 9pm on Tuesdays. The themed evenings allow listeners to sink into the atmosphere, as if in an underwater snorkeling adventure. Each reader is bound to have a different style, and not all will play to the listener’s tastes. But the overall effect is of a sea of tropical colors.

The North Bay is awash with writers, and the stage at Zebulon’s has been graced by some of the brightest lights in the North Bay literary community. Susan Bono, Jane Love, Dan Coshnear, Michele Anna Jordan, Rebecca Lawton, and Jonah Raskin are only some of the familiar names who have appeared. Each evening is carefully calibrated to adhere to the theme and to introduce a number of writers, six or seven at the most. Rosenfeld admits that she has high standards in choosing the writers, but she’s aware of differences in experience.

“I like the atmosphere where you come in and you have seven readers,” she says, “and two of them are less polished or a little rough around the edges, and a couple of them are really stellar. . . . I think sometimes it makes the polished stuff shine more brightly, and sometimes it makes the raw stuff–you see the potential in it. I like that rugged juxtaposition of kinds of writing.”

As a writer with ambition, of course, Rosenfeld doesn’t intend to shepherd other writers to greatness while she sinks into Zebulon’s booths. Rosenfeld describes her style as being “on the ornate side”–and she has big, unformed plans. She wonders out loud about being able to put together an anthology of LiveWire readers or a small journal. “My goal now is to keep it alive and to keep interesting topics, readers, and audiences.”

In the meantime, she’s just “won” National Novel Writing Month by writing a 50,000 word novel in 30 days, she’s dealing with the hoards of publicity hounds that LiveWire has unleashed on her, and she’s planning the next few months’ worth of salons. She also edits the fiction section of Word Riot, an online literary magazine, and conducts an editorial consulting business.

In a world where writers so often labor at uncreative day jobs, Rosenfeld has finagled an impressive synthesis. “I have been wanting for a really long time to have my work life and my writing life merge in one way or another so that everything I do is writing-related.”