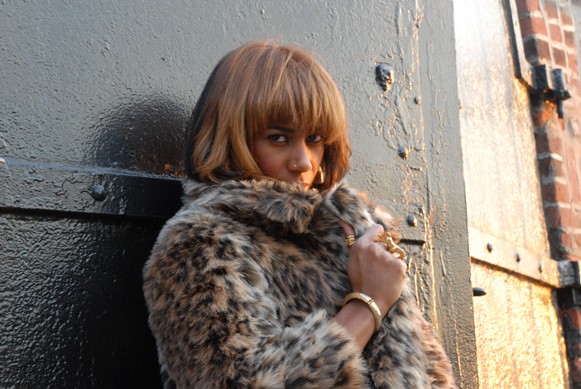 It seemed like the best kind of 80s dance party at the Warfield last night, with bright New Wave fashion onstage and off and music that, for the most part, tastefully referenced the time period’s styles.Santogold’s summer tour kicked off right, with her boyfriend Trouble Andrew. The former pro snowboarder must have learned something from the competitive Olympic spirit because, despite his opening slot, he came to win. Not only was his band visually stunning (featuring a guy in a giant skull mask and a gold chain around his neck, just standing there nodding), they offered kinetic, tight renditions of songs from his recently solid self-titled debut, including a more rocking’ “Chase Money”. His brand of solid post-punky synth-pop makes him the male Santigold with an added dose of kitsch. Trouble Andrew exhibited a great stage presence. Whether rapping or singing (thankfully light on the vocoder-ish effect heard on his recordings), he enthralled the audience, even writhing around the floor like he was Iggy (synth-) Pop. A nice surprise for the crowd, who seemed converted at the set’s end.

Next up was Amanda Blank, whose performance didn’t fare nearly as well. Armed with a just a DJ, a lackluster singing voice, and a short black skirt, she didn’t offer much to supplement her homogenous set of mid-tempo dance tracks. Things improved as she sang less and rapped more, spitting the sex rhymes that have generated much buzz on guest spots with Spank Rock and others. But the songs were still hampered by her palpable reticence (and the complete lack of stage decor or a light show). But half her set was a little too derivative, including her first single “Might Like You Better”, a reworking of Romeo Void’s “Never Say Never”. Things ended hopefully with “I’m the Coldest Bitch You Know”, easily the best song of the set. But we’ll see if she grows as a performer on this tour because her stage moves just do not cut it.

Blank’s best friend from Philly ruled the night as expected. Even with the same nonexistent stage decor, Santigold did everything right, from the visuals (especially two bespectacled Devo-like backup singer-dancers) to the faithful renditions of each song from her stellar eponymous debut LP. Decked out in a shiny gold suit, Santigold (recently changed from Santogold due to legal threats from an infomercial jeweler) was so relaxed and engaging throughout the night that even false starts with her new band didn’t slow the momentum.

Her meager output was actually a good thing, since she had room in her show for side projects & obscure tracks, most notably her verses from the recent Jay-Z track “Brooklyn We Go Hard” and the Africanized “Get It Up”, the best song off last year’s brilliant mixtape with Diplo “Top Ranking”. Another strength is her voice, despite its limited range, which proved dexterous in songs from the feathery alt-pop of “Lights Out” to the throbbing dubstep of initial set closer “Creator”, where she invited half a dozen crowd members onstage for an impromptu dance routine.

Though her songs each sound different from one another, her bassist and guitarist didn’t actually get much of a live workout except for a few songs (best of all a delicious punk song from Stiffed, Santi’s former group). Nonetheless, each song is a stunner and her musical diversity appears entirely organic, a hopeful sign throughout the evening that we may really live in a veritable “post-genre” age.

Even without a wealth of quality material buoying her, Santigold’s down-to-earth charm and onstage comfort would make her an amazing master of ceremonies. “You better not put that near anything hot,” she told a fan early in the show after signing his vinyl copy of her LP,“…not like it’s not hot already.” Everyone laughed, then everyone danced.––– David Sason