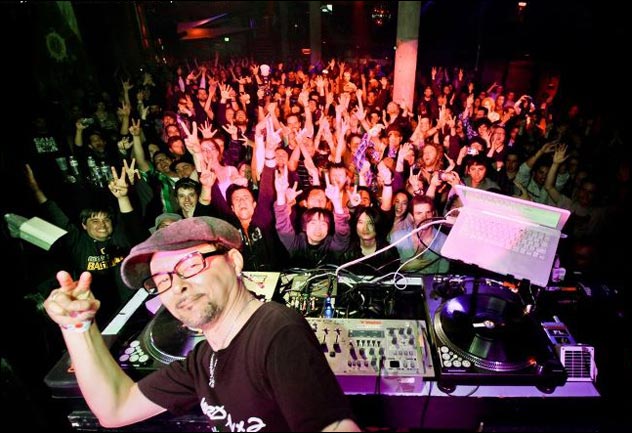 When you’ve been in the game for as long as DJ Krush, you can do the unthinkable. Book a “20 Year Anniversary” tour and play a three-hour set? Sure. Why not?
On Saturday night the tour hit the Mezzanine—a rare opportunity to catch Krush, a living hip-hop legend, in one of his stateside appearances. But while many predicted that the 49 year-old Japanese producer would use the “20th Anniversary” tag to revisit his classic mid-’90s MoWax material, Krush is nothing if not unpredictable.
He played dubstep.
Not right out of the gate, mind you, and not for the whole set, but dubstep nonetheless. And while some of the crowd surely recoiled at the what’s-becoming-inescapable wompwompwompwomp, most of the crowd loved it. Krush seemed to love it. How can you fault a guy for evolving and adapting with the times?
Here’s something else: DJ Krush is damn good at playing dubstep. Probably because he’s been residing down around the same BPM for most of his career anyway, Krush’s command of the genre came off as entirely natural, and—this is important—utterly creative and not reliant on novelty. Say what you will about dubstep’s disposable nature, but it seemed to inspire the most inventive sound manipulations of the entire three-hour set.
The other thing: Krush attracts a varied crowd, because after 25 years he’s been through so many eras. You get the beathead hip-hop fans in hoodies and nodding heads from Meiso‘s Black Thought and C.L. Smooth collaborations; you get the Burning Man twirling girls from Zen‘s singles with Zap Mama and N’Dea Davenport, and you get new fans rolling in who need their guts rumbled by, well, dubstep.
At the two-hour mark, Krush still hadn’t delved deep into his MoWax days—”Only the Strong Survive,” at least, would have been a nice touch. But he’d still traveled some very mindblowing territory on his 15 year-old Vestax mixer, with wood flutes, electric guitars, the “Armagideon Time” bassline, a Bach organ, the “Paid in Full” beat,” Japanese rap and Rusty Bryant’s “Fire Eater” (greatest drum break in the world, maybe?) in the mix. All tinged with that elusive DJ Krush touch. It was danceable, thought-provoking and utterly addictive—one of the best sets I’ve witnessed.
The Mezzanine got that 1am vibe. A guy in a Gordo Taqueria T-shirt started punching himself in the face to each snare hit. A semicircle of friends chanted on a bald guy downing a Bloody Mary. A girl thrust her hand down another girl’s vest. People making out all over. Krush took the hint, chilled things out, and played some of his more “vibe” material to send people home.
DJ Krush turns 50 this year, and he’s still amazing. Here’s to longevity.

(Opener’s Note: I walked in and heard what I thought might be the Gaslamp Killer, but was thrilled to see Benji Illgen, a.k.a. Mophono, up on the turntables. Benji’s an old record-obsessive acquaintance from Santa Rosa who’s been in the city for over a decade now, and wouldn’t you know it, he puts out Gaslamp Killer records (and scores Flying Lotus collaborations) on his CB Records label. His set—half Serato, half vinyl—filled the early ’90s gaps that Krush would later leave empty, and it was a treat to see Krush hit the stage and bow in tribute to Benji. A great set. Hope you’re doing well, amigo.)