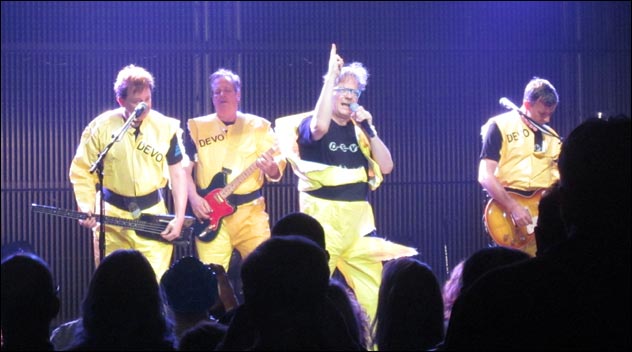 Travel back in time 30 years ago and tell the average “Whip It” fan that Devo would still be relevant in the year 2012, and you’d probably get a totally 1980s “Barf Me Out” in response, accompanied by a conspicuous lift of the Vuarnets.
But as proved by a comprehensive hour-and-a-half set at the Uptown Theatre in Napa on Sunday night, Devo has every reason to exist, still, years after their debut album. They played with urgency, decidedly unlike a bunch of old guys going through the motions, and they delivered song after song that, in whole, left a statement about the hopeful nature of humankind and the ultimately hopeless fate of the world.
That might sound bold in reference to five guys with energy domes on their heads, but bear with me.
Devo threw potato chips all over the audience. Devo went through six costume changes. Devo had a huge video screen backdrop. Devo ran up and down the aisles with pom-poms. Devo dressed in airbrushed unicorn shirts, masks, radiation suits and knee pads. And they played the hell out of every era’s songs: “Girl U Want,” “Mongoloid,” “Peek-a-Boo,” “Goin’ Under,” “Gates of Steel,” and many, many more.
“Most people here know that de-evolution is real,” said Jerry Casale at one point, “but when you’re up here in wine country, you get the feeling that de-evolution missed just a little patch. The wine gods shined down.”
“Uncontrollable Urge” was the obvious rock moment of the night, while their cover of the Rolling Stones’ “Satisfaction” was probably the best surprise—not that it was played, but that it sounded as weird as the very first time. “Mr. DNA” climaxed with a guitar solo ending in the total whammy-barification of all six strings. Snap!
But the tiny details, the little lyrics like “It’s a place to live your life!” from “Planet Earth” (like Santa Rosa’s official slogan, “The City Designed for Living”)—those are what makes Devo great. During an intermission, the video screen played a public service announcement about the world: “A tiny infintesimal speck of sound in this vast, incomprehensible universe . . . an insignificant dot with a lifespan too short to measure . . . and on this planet earth, there is Devo . . .”
Of course, “Jocko Homo” was great, with Mark Mothersbaugh encouraging audience members one by one to sing the “We are Devo!” response into his microphone; after all these years, it still has all its power. And at the end of the long, comprehensive set, “Beautiful World” ended with Mark Mothersbaugh throwing 100 superballs out into the audience, all of them bouncing off the chairs, the walls, peoples’ heads. It was surreal, it was fun, and it was most decidedly Devo.