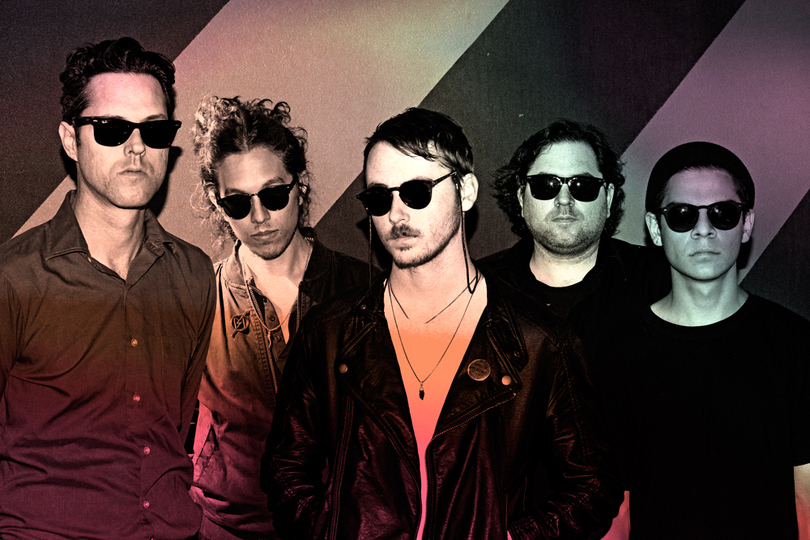 Arizona psychedelic rockers Destruction Unit are a no-holds-barred head trip through post-rock walls of sound. After two years of relative quiet, the pummeling five-piece outfit is back with the their most experimental brain melter of a record yet, Negative Feedback Resistor, due out Sept 18 on Sacred Bones.
In anticipation of the new album, Destruction Unit has released a few tracks via the world wide web, including this absolute scorcher of a song, “The Upper Hand.” In fact, this thing sound more like a punk rock cherry bomb, set off in the midst of a tornado, eclipsed by a tsunami swell of noise that washes over the whole thing by the end. It’s a monster, and it’s one of the band’s best ever. Listen here, if you dare.

The group is slated to hit European shores the same day the new record drops for a month-long tour, but before they embark, Destruction Unit is playing three dates in California, including a show hosted by the Pizza Punx on Thursday, Sept 3, at the Arlene Francis Center.
Also on the bill are Gag and White Wards, both Olympia, WA, bands that know how to thrash. Southern California weirdo punks the Coltranes and Seattle noisemakers Health Problems open the show.
Destruction Unit headline on Sept 3 at the Arlene Francis Center, 99 Sixth St, Santa Rosa. 8pm. $10.

Charlie Swanson
Charlie Swanson is a North Bay native and an arts and music writer and editor who has covered the local scene since 2014.
Previous articleGlee Club: Should Democrats still be cheering on Donald Trump as Americans go all-out ugly for him?
Next articleCity Winery to Leave Napa