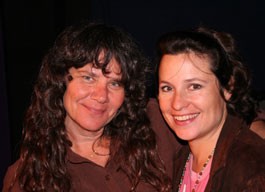 Mezera and Gerber with the dirt left on

Good Together: Gerber and Mezera perform with pure fluidity.

Like Timbuktu or Kingdom Come, Tasmania usually exists in people’s imaginations at the absolute end of the earth. If something is from Tasmania, so says the unquestioned opinion, then it must be from out of this world.

Undermining this notion is Audrey Auld Mezera, a child of Tasmania who writes and sings songs with a worldly truth. She calls it “music with the dirt left on.” She not only sounds like she grew up on Music Row in Nashville, but she writes the kinds of songs that built Music Row in the first place. She performs April 22 in a CD release show at the Black Bean BBQ with Nina Gerber.

“We were brought up to respect nature and to be honest,” Mezera says from her home in Stinson Beach. “So when I heard country music, the honesty of that really struck me. It was really emotive and spoke straight from the heart.”

Having grown up with no television set, Mezera discovered country music on her own. An early memory of a divorce party with a room full of women ironically singing along to Tammy Wynette’s “Stand by Your Man” offered her first impression on the music that was to eventually guide her life.

“I don’t know if country music has that much to do with the country anymore,” she says. “I think it’s just about the truth.”

Mezera formed Reckless Records in 1998 and released three acclaimed solo albums in her native Australia; she also arranged Australian releases for Fred Eaglesmith and Mary Gauthier, opening up a world of musicians from across the ocean. Two years ago, Mezera married and relocated to California. It was only a matter of time before she crossed paths with one of the greatest accompanists in the world, Nina Gerber.

Right when she had started to miss the partnership of an accompanist, she met Gerber at a Nanci Griffith concert. “After hearing her play one song with Nanci,I knew that she understood the music,” Mezera says. “She’s very expressive, and she’s a great interpreter of songs. She knows how to play the right thing.”

In December of last year, the two booked a show together at Sebastopol’s Studio E that just happened to be captured on tape. Afterward, upon hearing the recording, the two realized they had something special, and indeed, the resulting double live CD, In the House, is a document of pure fluidity.

Among a few well-chosen cover songs (Johnny Cash’s “I Still Miss Someone,” Eaglesmith’s “Alcohol and Pills” and a sing-along of John Lennon’s “Imagine”) Mezera’s own songs shine. Among her best are “I’d Leave Me Too,” a concise picture of the truly crestfallen self, and “Losing Faith,” a winless double battle which pits faith in men against faith in the Bible.

“I think most women come to this moment where they learn and accept that men are imperfect,” she explains between songs, affectionately joking that she has been married for “two long years” and remarking that not even a nurse in Finland would take her husband off her hands.

There’s a charming, tongue-in-cheek nature to these playfully vaulted barbs, and any misunderstanding about how Mezera truly feels about her husband is cleared up by the song “Love You Like the Earth,” a heartfelt, metaphor-driven song beautifully highlighting one of Auld’s most enduring melodies.

Second to her songwriting is her expressionistic phrasing, something that Lucinda Williams and Patty Griffin share. When she sings that “you’d leave me stra-a-nded,” it feels as if her entire body were supported by tiny twigs, each slowly starting to crack. When this delicacy is augmented by Gerber’s sprawling atmosphere of arpeggios, absolute chemistry is at play.

House is unprocessed by editing software for the sake of the good, honest truth. “The less that you tamper with it,” Mezera says, “the more of that magical something is preserved.”