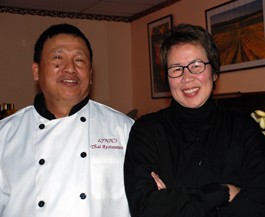 When Lynn Athavimol had lunch three decades ago at a Union City Thai restaurant, she had no idea that a plate of rice noodles was about to change her life. The chef there, a former policeman who exchanged his gun for a set of cooking knives, had made Lynn a plate of pad Thai. At first bite, she thought, “I have to marry this guy.”

About three years later, she wed Pyrote Sawangwan. The couple, who have been at the forefront of the North Bay’s Thai-restaurant scene since the late ’80s, recently opened Lynn’s Thai in Cotati’s Apple Valley Plaza. Pyrote works his magic in the kitchen; Lynn runs the front of the house.

Old friends and new fans of the couple’s restaurants are finding a warm welcome at Lynn’s Thai. Regulars praise the authentic Thai food they came to love when Lynn and Pyrote owned Thai House in Santa Rosa from 1991 until 2004. They keep coming back for Lynn’s convivial company, and newcomers rejoice when they discover Pyrote’s dishes.

“I think we’ve eaten in just about every Thai place in the county, and this is the best,” said Philip Tamarkin, eating for the first time at the restaurant. Tatiana Tamarkin said she appreciated the “beautifully presented dishes” and “lovely” soup. “They got the spices just right,” Tatiana says.

Stopping in for a lunch special recently, I was greeted with a steaming little bowl of tom kha gai, a coconut-milk soup with cilantro, kaffir lime leaf, lemongrass and the pungent gingerlike Thai spice called galanga. The soup was rich but not heavy, satisfying but not too filling, allowing me to enjoy the artfully presented red curry chicken.

The entrée was served on two plates: one had a fresh mixed-green salad topped with a sprig of parsley, a pair of sliced spring rolls with dipping sauce, and a little pyramid of brown rice. Alongside the appetizer plate was a square bowl of red curry with strips of skinless chicken, bamboo shoots, zucchini and other veggies in a savory sauce. Like the kind of real Thai food served in Thailand, it had a hint of sweetness to complement the chili but wasn’t cloying. The lunch combo cost $9.25, an excellent value.

The restaurant’s atmosphere is clean and light, with a few framed prints of the Buddha, Thai scenes and wine country images. Even the kitchen, visible from the dining room, seems serene. “The Buddha is calm,” Lynn says. “We don’t want to bang pots and pans because the Buddha likes a quiet peaceful place.”

Unlike some restaurants that make you feel they’re doing you a favor by letting you eat at their establishments, Lynn’s diners feel they’re part of an extended family. That’s why so many were disappointed when Lynn and Pyrote sold Thai House in 2004. The restaurant had a loyal following, but Lynn and Pyrote had earned some time off.

Coming to the United States as immigrants, they had worked grueling jobs. Lynn toiled for five years as an inspector at Teledyne, checking microwave parts under a microscope for $3.15 an hour and doing piece work in a clothing factory, getting paid 2 cents to sew cuffs, 50 cents for a collar. Pyrote had labored at a friend’s restaurant, first sweeping the parking lot, then washing dishes before working himself up to the cooking line. Owning their own restaurant was a big step that left the couple with little free time.

After working long hours for almost 20 years, Lynn says, “We thought, why not take a vacation? We were working like slaves, we had no kids, so why not travel while we still have energy? If we’d had kids, we probably would not have gone back to Thailand.”

Lynn and Pyrote were the loving parents of a baby who died when just 14 months old. “I got pregnant again but had a miscarriage, and then another miscarriage,” she remembers. “I was 42, and I said that’s it.” At that time, she says, “I felt we’d come to this earth for nothing, but we picked ourselves up.” Alchemically, Lynn seems to have transformed the devastating loss of her child into a greater sense of family she extends to her customers.

After selling Thai House, Lynn and Pyrote shipped some of their worldly goods to Thailand, where they planned to settle, and sold the rest. Then they embarked on a world tour that took them to France, Switzerland, Italy, Israel, Jordan, Australia, China, Cambodia and Vietnam, mostly places they’d never seen.

They rented a car in Europe, leading to typical travel spats. Given the challenges of driving in Europe, “the travel agent said it’s amazing we’re still married—we argued all the time!” Lynn says. The couple landed in Chiang Mai, a much smaller (population 170,000), less polluted and easier to navigate city than Lynn’s native Bangkok (population 10 million).

Embracing their never-ending love affair with food, the couple took cooking classes in Chiang Mai. Friends from the North Bay visited, and Lynn took them on elephant rides and to anaconda shows, as well as to vibrant open-air food markets.

After four years of living the good life in northern Thailand, Lynn and Pyrote, both in their early 50s, decided they were too young to retire. They returned to the North Bay and opened Lynn’s Thai in October. Monday, the only day they close, isn’t quite a day off.

“In Thailand, it’s easy to find ingredients,” Lynn said, “but here we have to go to Asian markets” in Santa Rosa or San Francisco. The couple often spend Mondays on Clement Street in the Richmond, shopping and then eating at friends’ restaurants to compare recipes and cooking styles.

Today, Lynn noted, Thai places are numerous, but Lynn recalls that when she opened her first restaurant most people had no idea what Thai food was all about. “When the first Thai House opened [in 1989 in Rohnert Park], we had one customer,” Lynn says, “and he didn’t come into eat—he was looking for a bus. We gave him a tea. We made 85 cents that first day.”

To bring in customers, Lynn invited people from Thai temples to stage Thai classical dance shows in the restaurant. “We offered $15 for dinner and dance performances; there was a line out into the street,” she says. Today, Lynn doesn’t need to hire dancers to lure customers. It’s Pyrote’s food, and Lynn herself, that keep them coming back.